Responding early Wednesday morning to the report of a big, dead carp at a Dayton, Ohio-area intersection, a local policeman... 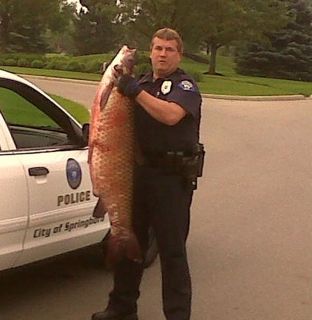 Responding early Wednesday morning to the report of a big, dead carp at a Dayton, Ohio-area intersection, a local policeman alertly deducted that the enormous freshwater bottomfeeder was not the victim of a hit and run accident.

Instead, Springboro Officer Dale Richter surmised that the whopper probably fell out of the back end of an unlucky angler’s pickup truck overnight.

“That’s probably the biggest carp I’ve ever seen,” Richter told the Dayton Daily News in reference to the behemoth bugle mouth discovered at the intersection of Remick Boulevard and Settler’s Walk Road.

“I would just assume someone was late night fishing last night and it probably fell off the back of his truck,” the officer said. “There’s going to be a very unhappy fisherman, somewhere.”

While the local cop didn’t actually measure the fish, he told the newspaper that he “stepped it off,” using his 11-inch boot for reference and concluded it was about 5-feet in length.

The roadside carp was officially identified by an Ohio DNR fisheries manager as a White Amur, or grass carp, a species commonly used to remove vegetation from private lakes and ponds.

In writing up his official report of the incident, Richter noted there was no compelling evidence that the big fellow was hit by a vehicle while attempting to jaywalk.

“I don’t think it’s the missing link,” he joked.