Fishing buddies Tim McKneely and Mark Alexander started their holiday by breaking a decade old record for the largest catfish... 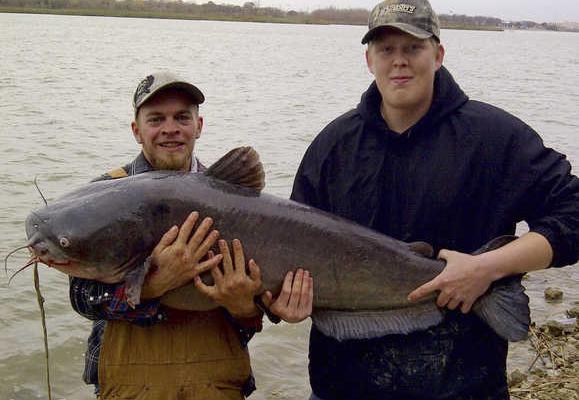 Fishing buddies Tim McKneely and Mark Alexander started their holiday by breaking a decade old record for the largest catfish caught on Lake Worth, near Fort Worth, Texas on Monday.

The two 24 year olds worked together to land the 72-pound blue catfish. When the monster cat ripped into the shad baited hook, Alexander set the hook and passed the rig off to McKneely to reel him in. “I knew he was big, just not how big until I got him up and he started rolling,” McKneely told the Fort Worth Star Telegram. “The fish came in easily, but was the devil to land. He bent our net and broke our fish grips.”

The blue cat measured 48-inches-long, carried a girth of 35 inches and beat the decade old previous record by 17 pounds. The two men released the fish after weighing it and, of course, posing with it in a few pictures. “I like going for the biggest cat I can get, but I’m not going to eat them,” McKneely said. “Records are made to be broken. This fish will grow more and someone else will break my record.”

To break the state blue catfish record McKneely and Alexander will have to catch one considerably larger than their Lake Worth monster as the record currently stands at 121.5 pounds. That fish, “Splash,” was caught in 2004 on Lake Texoma.