For the fall's best angling, fish impending storm systems with these expert tactics 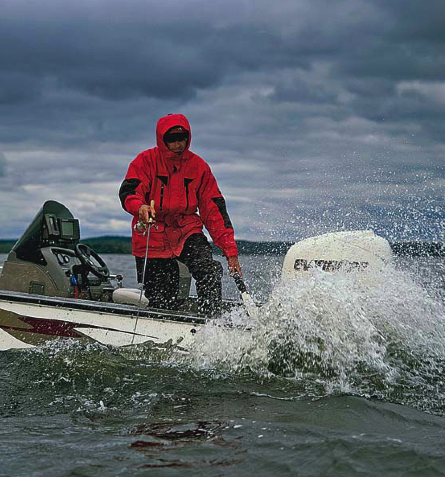 The best time to be on the water is during a drop in barometric pressure. The intensity of the bite often increases in direct relation to the drop. Outdoor Life
SHARE

As the long, hot days of summer give way to the increasingly cool nights of autumn, weather patterns begin to change more frequently and with greater intensity. An angler can often start a day on the water under blue skies, only to find himself facing down a wall ‚Ä®of ominous thunderheads in the afternoon.

While that impending storm front might cause an angler without raingear some discomfort, it can also trigger a hot bite. What many anglers know intuitively, but don’t actually understand, is that it’s the changes in barometric pressure associated with good and bad weather that turn the fish on and off like a giant kill switch in the sky.

Because fall is a transitional season, winds, weather and their associated pressure changes can be more extreme–and so can the fishing. Each region of the country exhibits weather patterns that consistently influence air movement. By understanding local weather patterns, you can plan successful fishing trips more often. ––Bob Sampson

How Weather Turns on the Bite

“My best day of fishing? I’m not sure, but I can tell you that certainly one of the best days of bass fishing I ever had was in Texas, when I was living near Austin,” says veteran angler Mark Nichols. “A big tropical depression was closing in on Corpus Christi at the coast, and a buddy of mine and I launched a canoe a day or two before the storm hit. It was a beautiful, calm morning, and the water in Onion Creek was gin-clear. We started casting plugs, and the bass action was just nuts. It was ridiculous how aggressive they were.

“Three times that day I had two bass hooked on the same plug on different treble hooks. We watched bass bump each other out of the way to get to our lures,” says Nichols. “Most of those fish were two to three pounds, but we had some five-pounders, too. We also had live bait out for catfish and got three huge cats-including a thirty-two-pounder, which I remember because it wasn’t easy getting a fish that big into a canoe.”

Indeed, summer and early fall fishing is all about weather systems and getting out on the water on those magical days just before and after a big weather system moves through an area. Crashing barometric pressure turns on the bite before a front. Then, once the violent weather has moved through, water quality settles and baitfish return to their usual haunts and game fish go on the prowl once again‚ Sometimes after several days of having had difficulty locating food.

Lifelong coastal angler Kim Norton has seen it all before. Norton, who grew up in Mississippi, specializes in inland bass and panfish, and in redfish and sea trout on the coasts of Mississippi and Louisiana.

“My dad taught me long ago about fishing just before big storms pushed inland from the coast,” explains Norton, a manager for Pradco lures in Arkansas. “We’d see a storm brewing in the Gulf bearing down on us, and we’d drop everything and get on the water. Bass are just crazy to strike, and they want lures fast‚ nothing slow or easy like jigs or plastic worms. They want quick-moving plugs and spinnerbaits. It’s run-and-gun fishing. There’s no finesse fishing before a big weather front. Bass are gorging, feeding like a fat man at a pizza buffet.”

“There’s nothing quite like it, and I look forward to it every late summer and fall,” says Norton. ––Bob McNally

In general, air masses move from west to east across North America. This “global weather pattern” is created by a combination of the earth’s rotation and the jet stream, which guides air masses north or south into various regions of the country as they move across the continent.

During the fall and winter, the jet stream tends to migrate in a southerly direction, pulling cold, dense, physically heavier, high-pressure arctic air masses from the north.

Wherever warm and cold air masses meet, storms begin to brew. In the process, there are often rapid changes in temperature, wind direction and barometric pressure that affect fishing.

Tactics for Fishing the Storm

To successfully fish a storm front, you have to understand what is taking place in the atmosphere.

As a storm system approaches, a low-pressure warm front rides up over the top of a high-pressure cold front, causing condensation to take place in the form of clouds. During the time the skies are clouding up, and right on through to the end of the storm, there is a slow and steady drop in barometric pressure that increases as the main body of the system approaches.

Once the main body of the storm hits and moves through the area, rain, winds and sometimes thunder and lightning form along the frontal line. The pressure continues to drop until it bottoms out as the storm runs its course. The fishing should be good this entire time, although lightning and heavy rains on the water’s surface might spook fish.

As the inclement weather moves out, the cold front–a mass of heavier, denser, high-pressure air–begins to rush in behind the low-pressure system. The result is usually windy weather with clearing skies, dropping temperatures and a very sharp rise in barometric pressure.

Large storms will bring in stronger, more powerful and sustained winds, along with a much steeper, higher rise in barometric pressure than smaller storm systems will. It’s this clear, windy weather following rainy low-pressure systems that anglers–especially those participating in big-money bass tournaments–dread, because it usually brings the fishing action to a standstill. 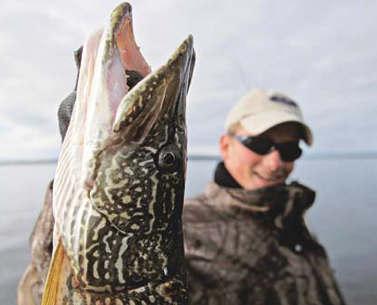 When predatory fish feed prior to a storm, just about any lure will work.

The Change in Weather is What Matters

A browse through my photo album tells the story. From the dozens of photos of 4-pound-plus largemouth bass, 10- to 20-pound pike, big walleyes, muskellunge and striped bass, a simple pattern emerges: Nearly every picture of a big fish was taken in the rain or under overcast skies–which means they were caught during dropping or low barometric pressure.

After five years of studying the effects of barometric pressure on angling success, targeting both freshwater and marine species, I’ve noticed some very consistent correlations between the two.

The most interesting observation is that the actual pressure level itself is relatively unimportant; it’s the direction in which the barometric pressure is heading–rising or falling–that has the most significant effect on fishing success. Simply stated: Rising pressure generally shuts the fish off, while dropping pressure turns the fish on and almost always improves your catch rate.

A digital barometer, with some sort of plotting function to keep track of the pressure as it changes, is a big help. You can literally chart the direction of the pressure changes and view it at a glance.

A savvy weather watcher can then compare the current pressure movement to predicted weather patterns to help determine with some degree of confidence how the fish will be biting–for a short time, at least.

Anglers can stack the odds in their favor by planning to fish when storms are moving into their area. Action will be especially good during a drop in pressure following a long period of high, stable barometric pressure.

Minor Drops: An interesting effect that has become apparent recently is what I call the heat-induced pressure drop. After the air has had a chance to heat up on a sunny day, it becomes physically lighter, causing a tiny pressure drop that the fish seem to react to in the form of a late-morning or early-afternoon bite.

Major Drops: The very best time to be on the water is during the drop in barometric pressure that occurs as a low-pressure system approaches. The intensity of the bite often increases as the pressure drops, occasionally right through to the end of the storm. The biggest storm systems are essentially dissipated tropical storms, often hurricanes, which move up through the center of the country and are then drawn eastward. When nor-easters (major coastal storms) blow into the New England region, they can bring with them two- or three-day stretches when the fish are literally hitting everything thrown at them.

Over the past five years, nearly all of the best days I’ve had catching northern pike and muskies, from Connecticut to Ontario to northern Maine, have taken place during a drop in barometric pressure. Last year, during the last hour and a half of prime low-pressure fishing time, before the cold front blew in behind a nor-easter, I ran home from work, launched the boat and landed three northern pike, weighing 101.5, 121.5 and 131.5 pounds–not bad for Connecticut. I have landed giant pike in similar situations in the past few years, including a time when I caught 121.5-, 141.5- and 151.5-pound pike on consecutive casts.

After a storm passes, the cold, arctic air that typically blows in behind it causes a steep, bite-killing rise in barometric pressure. In these conditions, forget about having a good day of fishing and just try not to get skunked.

Informal studies I’ve conducted with students who were targeting bluegills and largemouth bass have documented an 80 percent to nearly 100 percent correlation between rising pressure and below-average catch-per-effort rates for a given trip. My own experiences fishing for pike, bass, muskies, panfish and striped bass, and even ice fishing, confirm these results.

Where to Fish: When cold, high-pressure fronts move in, prey, along with the predatory fish that feed on them, tend to move into dense cover or out into deeper water, where they can be difficult to catch. This is when flipping jigs or running plugs around structure near deep water and working lures very slowly in likely spots can pay off. Persistence will result in catches during these times, but expect to work for every strike.

High pressure usually turns the fishing action off when the system first arrives. However, during the summer, when the water is warm, the metabolic rates of fish are elevated, so they must eat frequently, despite the weather, at some time during the day or night. During prolonged periods of stable high or low pressure, fish tend to settle into predictable feeding patterns, which equate to the typical morning and evening bites that summertime anglers count on, along with a minor midday bite during temperature-induced pressure drops.

The Need to Feed

During the fall, both water temperature and daylight hours are decreasing. These factors compel fish to feed heavily in order to fatten up for migrations or just to get through the winter. When the fish turn on during the fall, the bites can be spectacular–in both quantity and quality–due to the fact that all species of fish have a summer’s worth of growth on their frames and are trying to add as much fat as possible during this pre-winter feeding binge.

At this time of year, even when conditions are not favorable, count on dawn and dusk to trigger periods of active feeding nearly every day.

Fishing time is precious, so maximize your efforts with a plan. Anglers can count on favorable fishing conditions during cloudy, stormy weather and not-so-great fishing during beautiful, sunny weather.

A barometer that can track the direction in which the pressure is heading will help determine in real time whether or not you should be fishing. A glance at which way the pressure is headed might help tell you if the past two bite-less hours have been due to poor lure choice or because fish were suffering under increasing high pressure.

Most of us fish when we can, and not necessarily when conditions are the most favorable. However, if given a choice, try to get on the water before a storm moves in and avoid fishing as one moves out. ––Bob Sampson