The 7 Best Waters to Catch a Trophy Muskie

Ethel Maskinonge...where does she live? A guide to the top waters for catching giant muskies 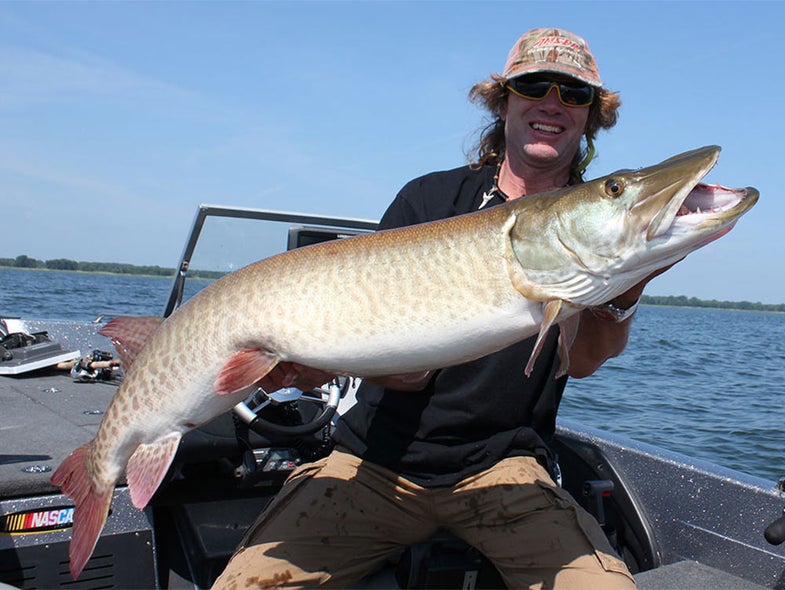 For those anglers who want to catch not just any muskie, but a real trophy fish, picking the right destination is even more important than picking the right lure. If you set aside all the exciting tips, tactics, and tackle, the greatest anglers consistently put themselves where the biggest fish are. Reality check: few locations have 50-pound muskies. And muskie history’s shenanigans of “I’ll beat your record” have set an unreasonably high bar. It’s important to remember that 50-pound muskies are world-class.

There are three requirements for growing a true giant: good genetics, great forage, and wide-open spaces. While muskies that possess prime genetics always grow faster and larger in any fishery, a massive and diverse forage base is needed for a muskie to reach it’s full potential. The biggest muskies come from huge waters in the northern regions, where muskellunge grow slower but live longer. Even though this could be considered un-PC in today’s age, we must also be gender-specific: females grow larger and carry eggs, which means they weigh more. If the ultimate goal is to catch the largest muskie possible, you want to fish in late-fall, and catch a big female carrying eggs, immediately after she’s eaten a hearty meal. If you’re able to do that on the waters I’ve listed below, it’s possible that old Ethel could be pushing 60 pounds.

This is the only water included in the list that I haven’t personally fished. I asked my buddy Johnny Dadson, who’s spent his life fishing Georgian Bay, for his thoughts. Here’s his take: “The Bay spans more than three million acres of Canadian wilderness. Each inlet from the southeast coast to the north channel offers its own experience and each area has its own genotype of muskies. We have residents and what we call ‘ocean fish’—these are spotted, iridescent leviathans that haunt our dreams. They are inaccessible much of the time, leaving the inlets (spawning zones) prior to the season opening in mid-June and don’t return until late fall. Spring and summer offer some fantastic bucktail and jerkbait fishing for resident fish, but the Bay is best-known for fall trolling with BIG plugs for giant muskies.”

History proves that Georgian Bay can turn out tankers. Two anglers have claimed catching 60 pounders. Johnny and his group have weighed many fish in the 40- to 50-pound class (they weigh big fish quickly prior to release). Georgian remains a front runner to break the world record.

This is a huge, vast, Great Lakes river system and my fishing here has been mainly around the Montreal area with my friend Marc Thorpe. Another popular and productive zone is the Thousand Islands area of New York. There’s tremendous big-fish history here and recent catches back the fishery’s potential. Captain Rich Clarke’s client released what was likely the largest muskie ever here—the fish measured 60 inches and had an incredible build (it’s pictured above). If ever a true 60 pounder was released, that was it. Many females here attain the upper 50’s in length and the knowledgeable folks who pursue them all season will boat a few fish in that class every year. While late fall is prime time, good fishing can be found throughout the season. The toughest part is choosing what section to fish. There’s tons of structure in many locations and lots of current. These fish spend a lot of time in deep, open water. If you’re seeking a true trophy fish, the best tactic is trolling open-water areas within proximity to spawning sections on the river.

There are so many tremendous muskie fisheries in the western portion of Ontario that it’s almost impossible to pick the single best. Each has its own “strain” technically as there’s no potential dilution from stocking. But if I’m forced to pick just one, Eagle Lake stands out. There is a claimed 60 pounder from this water and a continued history of big fish. It’s drawn many hardcore muskie fishermen over the years, in fact, if there is a downside to Eagle, it’s that the quality fishing has brought many good anglers. There might be more exceptional muskie anglers per surface acre on Eagle than on any other trophy fishery. Yet, thanks to catch and release the muskie population is as healthy as any time in recent decades. With that in mind, it’s best to concentrate your efforts away from classic structure and which draws heavy fishing pressure. Watch a muskie episode shot on Eagle Lake here.

The world-record fly-rod muskie was caught on Mille Lacs.

This lake doesn’t have a long muskie history like some of the others on the list and, it’s a little on the small side for a top-end trophy muskie water. But, for the last 20 years it’s turned out giant muskies in central Minnesota. Stocking created the modern fishery, mainly with Leech Lake strain fish. There was a peak period about 10 years ago when size potential paralleled high numbers of fish that were comparatively easy to catch. Even though that peak is seemingly over, a solid population of ultimate-growth monsters in upper 50-inch range still remain. I’ve caught and seen big girls, including the largest muskie I’ve ever had on. Currently, overall numbers are down due to reduced stocking and some handling (and keeping) mortality. But it’s still an exceptional and comparatively low-pressure fishery.

This is the other stocked lake in the Minnesota that, like Mille Lacs, just grows bigger fish. Vermillion muskies grow to upper 50-inch lengths and boast heavy builds. It doesn’t hurt that this is a beautiful place to fish as well. It resembles the Canadian Shield with lots of cool-looking rocky islands, rugged shoreline, and reefs. In addition to this wide array of classic structure, there are plenty of deeper zones with open-water forage bases. Interestingly, the lake varies gradually from clear and deeper sections to stained and shallower water. There’s big-fish potential throughout. The angling pressure here can be fairly high, so roam far to find waters to yourself.

Great Lakes strain muskies have always existed here, but there have only been fishable numbers in recent decades due to restoration efforts. There’s no doubt it’s the best trophy muskie fishery in Wisconsin. That being said, trophy-seeking muskie anglers won’t be alone as there’s plenty of fishing pressure. However, there is also plenty of room to search for Ethel out on the Bay. It seems like these fish travel in packs, more often than muskies in other fisheries. They show up in certain locations consistently with their seasonal moves. And even though these traditional areas are now well known, big fish continue to be caught. Green Bay muskies definitely roam far and wide from popular zones as well, including way to the north (and you can find them on both sides of the bay).

The famous lake might be the best naturally-producing muskie water on the list. Yet St. Clair still has big-fish potential. This combination of high numbers and big fish is extremely rare, because normally ultimate size potential goes hand in hand with lower densities. If I had one day to catch a 50-plus incher, I’d fish here. While I wouldn’t rate it (quite) with the others for true 50-pound production, the muskies on St. Clair have always attained upper 50-inch length, though historically don’t carry as much weight. When I first started fishing it 20 years ago, muskies were below average in weight per length. Yet, in recent years since a VHS muskie die-off scare, muskies are starting to carry heavier builds on average. Some of the fall fatties are true giants and a St. Claire Ethel could definitely tip the scales over 50. Between the river sections, massive open-water areas and shipping channels, there are plenty of places to look for her.