Henry Liebman caught this mammoth shortraker on June 21 while fishing out of Sitka, Alaska. Liebman’s rockfish weighed just over... 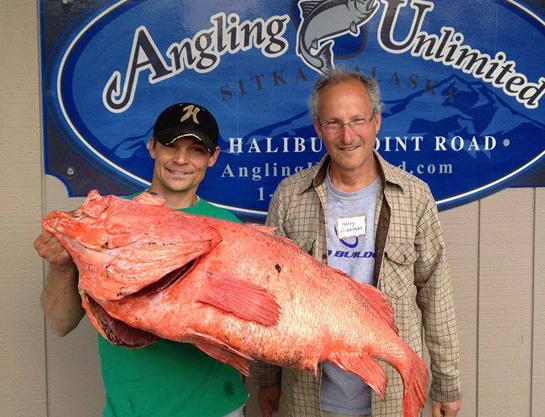 Henry Liebman caught this mammoth shortraker on June 21 while fishing out of Sitka, Alaska. Liebman’s rockfish weighed just over 39 pounds topping the old state record by about half a pound, according to the Sitka Sentinel (the IGFA lists the world record at 35 pounds). But what’s most impressive about this fish is its age: it’s two centuries old.

This from the Sitka Sentinel: _”‘The rougheye is the oldest-aged fish at 205,’ said Troy Tydingco of the Alaska Department of Fish and Game (Tydingco certified Liebman’s fish). He said the longevity record for shortrakers, which are often confused with rougheyes, is 175 years. But the [oldest shortraker on record] ‘was quite a bit smaller than the one Henry caught.’

‘That fish was 32 and a half inches long, where Henry’s was almost 41 inches, so his could be substantially older,’ Tydingco said.”
_
A fish sample was sent to Juneau for aging and Liebman took the fish back home to Seattle where he plans to have it mounted.