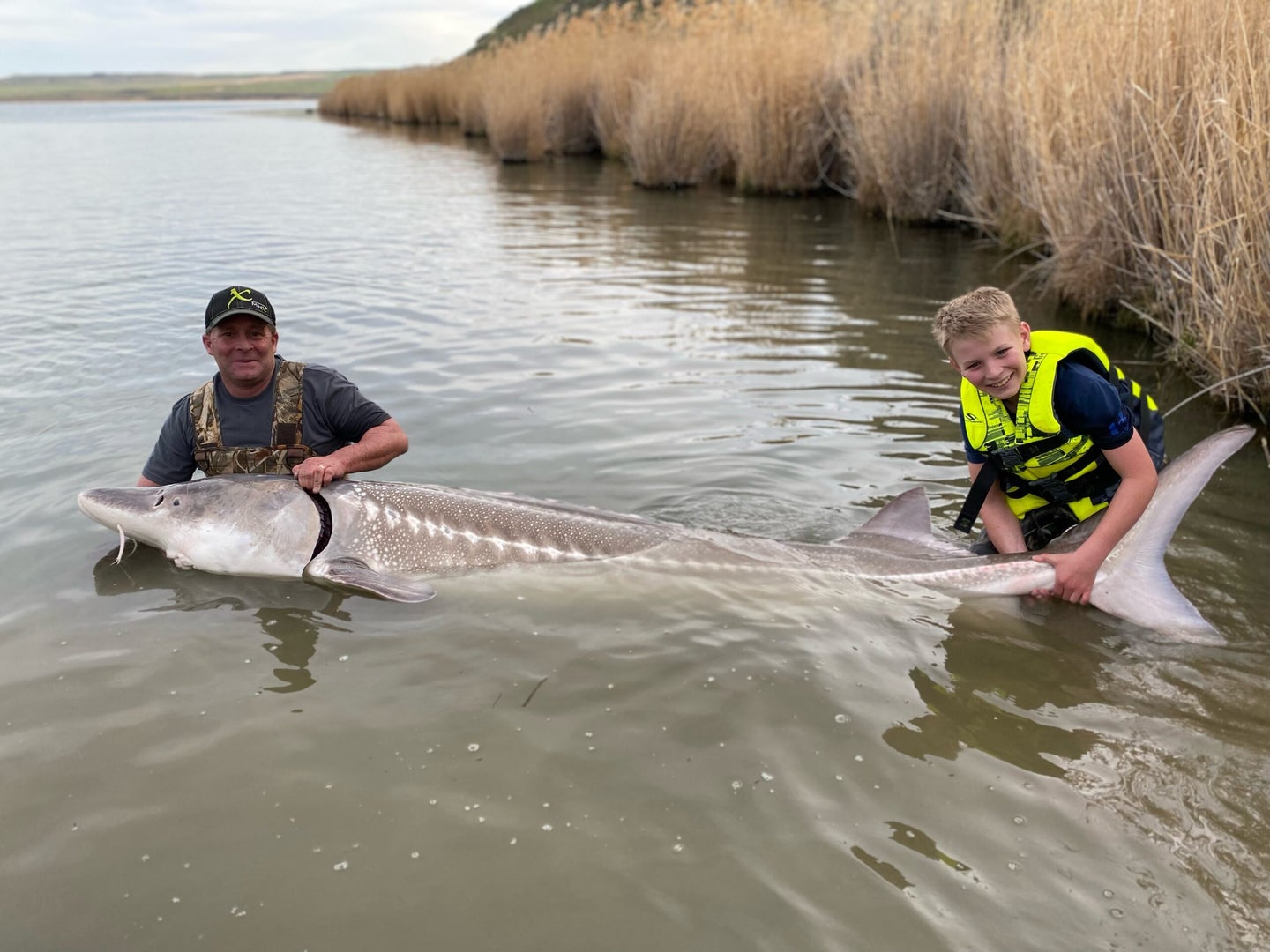 Lance Grimshaw (left) and his son Tyler hold onto either end of the record-sized sturgeon. Joe Weisner
SHARE

A 12-year-old angler from Vernal, Utah, experienced the battle of his life two weeks ago when he fought and landed a record-sized sturgeon on Idaho’s Snake River near Mountain Home. The fish taped out at nine-feet, 11-inches, which put it within an inch of the state catch and release record, KTVB-7 News reports.

Tyler Grimshaw caught the nearly 10-foot dinosaur while fishing with his father Lance Grimshaw and local guide Joe Weisner, who works for Jones Sport Fishing and exclusively targets sturgeon on the Snake River in southern Idaho. Weisner is a longtime friend of the Grimshaws, and the native Utahn says he’s been fishing with the father and son duo for years.

“Lance is actually a fishing guide on Flaming Gorge,” Weisner explains. “So we kinda go back and forth. I’ll go up with him and fish for a couple days and vice versa. And Tyler has come down to fish with me numerous times. That kid has probably caught 100 sturgeon on his own by now, but he’s always looking for that bigger fish, you know.”

On March 28, Lance and his son were in the area, and Weisner had the afternoon free after running a successful morning trip with five other customers, so this was Tyler’s chance to catch “that bigger fish.” He ended up catching one of the biggest fish ever landed in Idaho.

I didn’t take long, either. Weisner says that after getting set up on their first run of the afternoon, Tyler caught a solid seven-plus footer right out of the gate. Then, roughly 20 minutes later, Tyler set the hook again, and the giant fish went airborne.

“As soon as it was hooked it jumped,” Weisner says. “And I knew it was a really big fish.”

He explains that they were using a standard sliding sturgeon rig and drifting fresh cut bait along the bottom of the river. They were also using short, stout rods, which allowed Tyler to really put the pressure on the fish. Fortunately, they hooked the sturgeon in a deep pool with minimal current, which made it a little easier for the young angler to wear the fish out. Tyler was on the rod the whole time and brought the huge sturgeon to the boat all by himself.

“Tyler sat on that rod and pumped that fish for 50 minutes. He wasn’t about to hand that rod over to nobody,” Weisner says. “The fish jumped a total of four times. It jumped once right next to the boat—maybe two feet away. It was terrifying.”

The fish eventually surfaced though, and after carefully pulling it over to the shallows, they took plenty of photographs and a few rounds of measurements. The fish taped out at 119 inches, Weisner says, which is just half-an-inch shy of the current state catch and release record.

Because white sturgeon are a protected species in Idaho, it is illegal to pull these fish out of the water—much less harvest them. For record-seeking anglers, this means that only the catch and release record is attainable. (And it means that the current state sturgeon record of 675 pounds, caught with a set line in 1908, will stand for the foreseeable future.)

Also, as Weisner notes, Idaho regulations require the catch and release record for sturgeon to be broken by at least two inches. But after seeing Tyler’s fish, he’s even more confident that the next state record is somewhere in the Snake River waiting to be caught.

“As soon as I got ahold of that fish, I knew that it was a unique, giant fish,” Weisner says. “And if that fish is out there, the current Idaho record can absolutely be broken.”