Colorado Man Attacked by 3 Coyotes, Fought Them Off With Flashlight

Earlier this week we told you about a man who fought off a bear attack by grabbing the animal’s tongue.... 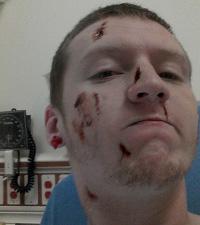 Earlier this week we told you about a man who fought off a bear attack by grabbing the animal’s tongue.

Now come news of a man who survived a coyote attack by utilizing his flashlight as a club.

Niwot, Colorado resident Andrew Dickehage was walking to work along 75th Avenue before sun-up Monday morning when he heard a rustling in the brush behind him. He turned to the source of the noise to see three coyotes.

The animals took turns lunging at him, cutting and biting his arms, neck, and face. The 22-year-old Dickehage told CBS4’s Jennifer Brice that he feared being knocked to the ground so he assumed a wide stance and began swinging his flashlight at anything that moved.

“So I took my flashlight and hit it over the side of the head to get it to let go. As soon as I got it to let go then another one went to lunge at me. All I really thought to do was swing and knock it to get it from jumping at me again,” Dickehage said. “Picture closing your eyes and having the three figures, you can barely see them, and all you could do is keep your hands up and just make sure that they weren’t going for the face … You feel the initial impact, and as soon as you felt it, then you could react and go to shove, but, I mean, after that … all I could try doing was make sure I was moving backwards.”

The attack ended after several minutes with the coyotes fleeing to the woods.

Wildlife authorities have found and killed two of the animals and are actively looking for the third.

Dickehage said although the attack was nothing he wanted to go through again, he was glad it happened to him rather than to children.