Too small? Too big? Just right? A moose-hunting veteran looks at the attributes and shortcomings of three popular rifle calibers 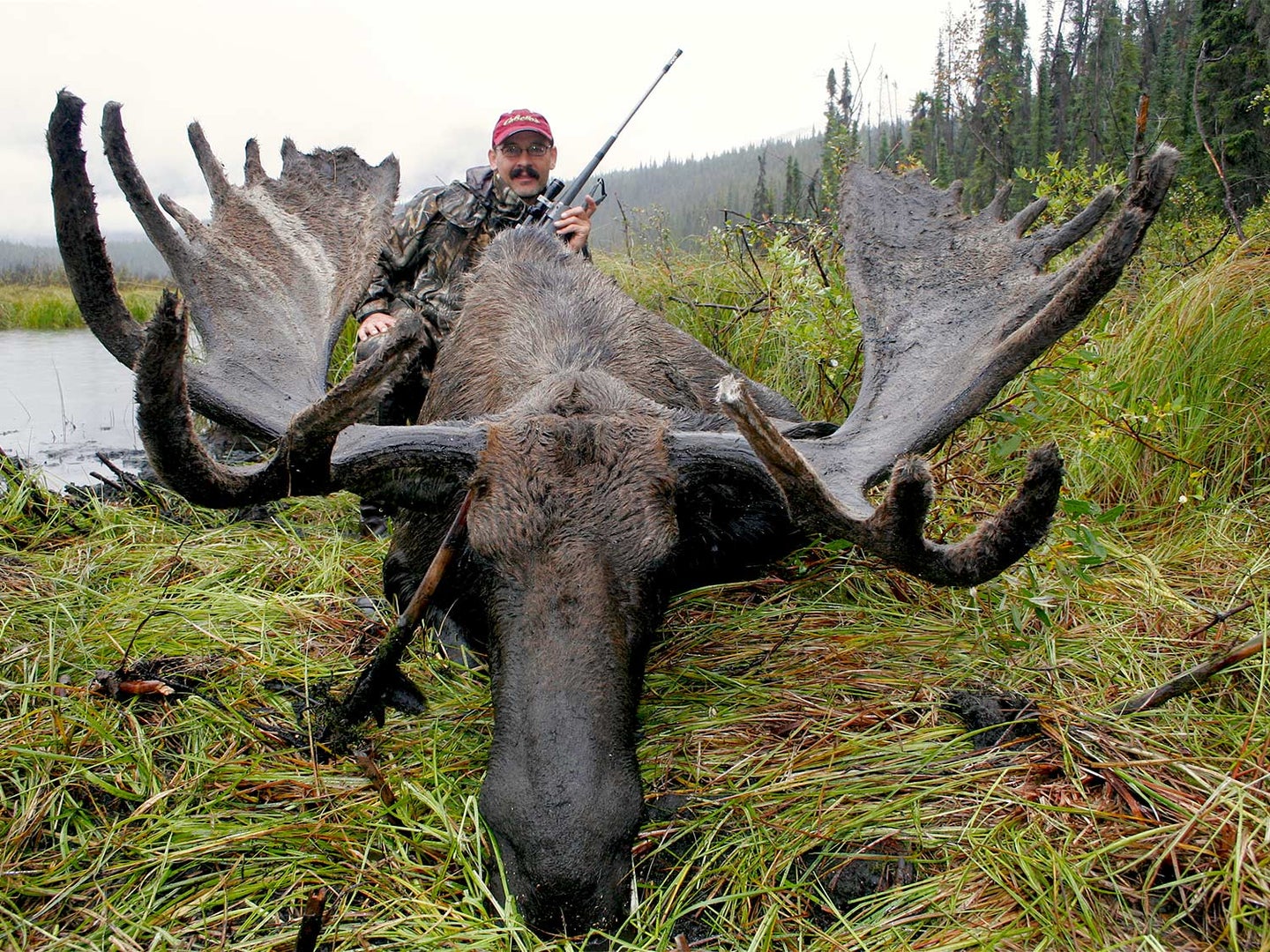 If you don’t live in moose country you might not believe this, but you can kill the world’s largest moose with your typical whitetail cartridge — even some of the smaller calibers — if you put a proper bullet in the proper place.

That doesn’t mean any of these are ideal for the purpose, but it does reduce one’s tendency to insist on a bullet weight and cartridge size commensurate with the bulk and mass of a 1,000-pounds-plus bull moose.

To dissuade you from thinking I’m merely theorizing here, allow me to confess that I’ve hunted moose several times and taken at least seven bulls with six different cartridges, the largest a .300 WSM throwing 165-grain Barnes TSX bullets backed up by 180-grain Swift A-Frames. The smallest was a 6.5-06 spitting a 120-grain copper and bronze Lost River J-36 bullet no longer made. Between these were .30-06, .280 AI, 7mm Rem Mag., and .270 WSM. If there was any difference in terminal performance among them, neither I nor the moose seemed to notice.

In my limited experience, a chest shot moose stands as if trying to figure out what just happened. He might hop a step or two, walk or trot a few yards, then go back to cogitating until his blood pressure drops. And then he does. The only exception to this delayed response comes when moose are hit in the spine instead of heart/lungs. Those fall right over. (And the real work begins. Breaking down a moose is equivalent to taking apart four to six whitetails. But it feels like 10.)

Now, since I haven’t experimented with any larger calibers or bullets, say .338 Federal through .458 Win. Mag., it may be that those produce a more dramatic and immediate effect. But I doubt it. A moose weighing 800 to 1,200 pounds (some say 1,400 pounds in a big Alaska-Yukon bull) is just so massive that neither a few fractions of an ounce of bullet nor a few hundreds of foot-pounds of kinetic energy are likely to make much difference. You terminate a moose by making a hole that tears blood vessels and arteries and breaks down vial organs like the heart and lungs without which oxygen cannot reach the brain to keep it running.

With that physiology firmly in mind, let’s examine three wildly different moose cartridges so we can understand their performance parameters and make an informed decision as to which we might wish to hire for our next moose hunt.

I was tempted to go with the .223 Remington here, but that seemed a bridge too far despite its proven performance in the hands of subsistence hunters. You must keep in mind that a far north subsistence hunter lives with moose and has plenty of chances to encounter one presenting the perfect shot. This means standing broadside inside of 50 yards and closer than that to the cabin, truck, or runway. You, on the other hand, might have just a week or two to hunt. And you might get one shot opportunity at a big bull at a bad angle far, far away. Who you gonna call? Probably not a .223 Remington. But maybe, just maybe a .243 Winchester…

The thing about this skinny-necked morph of the .308 Winchester is that it throws 55-grain to 105-grain bullets not quite a quarter of an inch wide. The .243 Winchester uses pretty much the same quantity of powder as does the .308 Win., but it’s propelling a much lighter bullet. And that means speed. Expect 3,950 fps with a 55-grain pill. Figure 3,100 fps or so with 100-grain bullets, the size commonly used for deer and recommended for moose.

As you might guess, a skinny, 100-grain projectile isn’t exactly optimum for deep penetration. It just doesn’t have the sectional density, mass, or momentum required to mushroom wide and continue driving forward through a couple of feet of moose chest. Parking it just behind the front leg and over or into the heart seems to do the job, but through the lungs also works, especially if the bullet breaks up, sending little particles of gilding metal and lead into vital tissues.

This is a delicate subject treading on something long forbidden. But often done anyway. Game shooting with varmint bullets. Frangible varmint bullets are illegal for big game hunting in many, if not most, states because upon impact they tend to shatter or “explode” into tiny fragments. This is ideal for an instant kill on small rodents, lagomorphs (rabbits and hares) and even fox and coyotes. Parked in the thoracic cavity, varmint bullets create small pockets of massive damage. If that pocket is in or near the hart/lungs, death is quick, if not immediate.

But… trusting such an explosive bullet to punch through the thicker hair, hide, and rib meat and bones of a moose? Not so smart. Yet this is what, I suspect, many of the subsistence .243 Winchester moose shooters are using. Perfect shot placement of a fairly frangible 55-grain to 80-grain varmint bullet in the pocket behind a moose’s front leg when it’s stretched forward puts that explosive little pill right in the heart.

Of course, a more substantial, controlled expansion 90- to 100-grain bullet through or just over the heart would be just as deadly. Its advantage, if you miss the heart, is increased penetration to extend the wound channel through more of the lungs. And if you really muff the shot and hit the shoulder, a tough 100-grain bullet should still get into the thoracic cavity.

Read Next: The Top Moose Cartridgegs and Bullets

Trajectory is not much of an issue. This same bullet zeroed 3 inches high at 100 yards should be dead on a 280 yards, about 6-inches low a 350 yards. A 10 mph crosswind will nudge it less than 8 inches off line-of-sight at 300 yards. Clearly, hitting the nearly 36-inch tall chest of a moose isn’t the issue. Wounding efficiency might be.

So where does this leave the .243 Win. as a moose round? Smack in the hands of a patient subsistence hunters in a target rich environment, someone who can wait for that perfect, close range shot from the cabin window. But…

A .243 Win. could also work for a recoil sensitive hunter of any size who can be equally patient and calm. Calm enough to wait for that perfect behind the shoulder heart/chest shot. Clearly this can work because it has worked. And often.

Even if you hit the shoulder, a tough bullet like the Partition or an A-Frame, Trophy Bonded Bear Claw, or Barnes X should reach the lungs or heart and possibly the far side hide. But this could start to get “iffy.” I’ve no direct experience with it, but extrapolating from a couple dozen of observed deer kills, I’d put my money on the little .243 bullet making it.

More valuable than penetration and on-target energy is the shootability of the .243 Winchester. This is the attribute that makes this little cartridge work on such a big deer. Recoil from this load in an 8-pound rifle should be just 11 ft-lbs at a recoil velocity of 9.4 fps. Can you say pussy cat? Any hunter should be able to shoot a .243 Winchester with pinpoint precision. And that means perfect bullet placement, the first and most important part of all terminal ballistic performance. The bullet and where you park it are always, always the two most critical parts of terminal performance. Nonetheless, if you can handle more recoil, I suggest you step up to one of our next two moose cartridges.

I know. Boring! Old and plodding. But still deadly. Actually, with modern powders and bullets, it’s deadlier than ever. Truly the only blemishes on the .30-06 are its age, efficiency, and hunters’ bias. This upgrade of the 7mm Mauser (check the head and body diameters. The .30-06 is standing on a proven foundation) has, like the Mauser, terminated every game animal on the planet. And probably a few extra terrestrials buried in Area 51. The gist of the .30-06 is a 180-grain bullet stepping out 2,700 fps (handloaders often get 2,800 fps) with 2,914 ft-lbs energy. With a decent, aerodynamic shape like the Barnes Triple Shock X (B.C. 452) in Federal’s Premium load at 2,700 fps, this slug should retain 1,500 ft-lbs of kinetic energy at 400 yards. (Take that, .243!)

There are no flies on this bullet in flight, either. Zero the above load 4 inches high at 100 yards and at 300 it will drop just 2.7 inches. Even at 400 yards this bullet falls just 17 inches. Our standard 10 mph crosswind deflects it just 13.5 inches at that extended range. If you can handle about 24.7 ft-lbs recoil at 14 fps in an 8-pound rifle, say hello to a mild mannered, proven moose getter, the deadly “old” .30-06 Springfield.

Since plenty of readers are going to call me onto the carpet for my .243 Winchester, I’ll try to placate them at the other extreme—and will surely catch flack for this, too. Try a .416 Remington Magnum. This is built on the full-length .375 H&H Magnum belted case. It throws 400-grain bullets around 2,400 fps (2,500 fps with some safe handloads.) That’s fast enough to hit your shoulder with 77.7 ft-lbs. recoil energy at 25 fps in an 8-pound rifle while churning out — get this — 5,552 ft-lbs muzzle energy! At 300 yards this will plummet to 3,148 ft-lbs, but I doubt any moose would notice.

If you’re worried about a moose-defying trajectory loop with this bomb, don’t. Zero a Federal 400-grain Trophy Bonded Bear Claw about 4.8 inches high at 100 yards and it should be dead-on at 250 yards, about 6 inches low at 300, 27 inches low at 400. Pretty easy to hit a moose chest with that. Even wind deflection of 11 inches at 300 yards isn’t too much. A moose — broadside anyway — is a big target.

While I’ve not seen anything hit with a .416 Rem. Mag., I have seen the effects of a

Read Next: How to Hunt Moose

the same 400-grain bullet from a .416 Rigby at a MV of 2,500 fps. A cape buffalo bull took the slug on the shoulder from about 75 yards. Its reaction was to run forward like a whitetail drilled with a .30-30 until it ran out of gas and crashed into a small mopane tree. While shorter and a bit more stoutly built than a moose, Cape buffalo weight about the same, perhaps 200 pounds more.

An old cow eland weighing about as much as a big moose absorbed a 400-grain hit without getting knocked over or even wobbled. The shot was a bit too far back and had to be followed up by a second. That one, administered inside of 40 yards, didn’t wobble the beast, either, but the hemorrhaging it induced brought her to ground quickly. The moral of this story? Don’t expect some kind of macho magnum knockdown muscle from the .416 Rem. Mag. Anticipate instead a somewhat wider permanent wound channel and excellent penetration.

The big challenges with a .416 Rem. Mag. include handling the recoil and/or the rifle (a 10-pound rifle will tame felt recoil to 62.6 ft-lbs at 20 fps. Gee, almost purrs like that .243 Win.) A healthy adult without physical limitations can easily train to handle both the weight and recoil. Unfortunately, folks with sufficient funds for an Alaska moose hunt often have so many miles on their odometers that they favor lighter rifles and less kick.

If you absolutely cannot stand much recoil, don’t wish to handle a 10-pound rifle, are exceedingly patient, and have the time to invest in getting a close, perfect broadside heart shot, consider the .243 Winchester.

If you are young and/or tough and love a solid punch to the shoulder (and can take it without flinching,) go with the big .416 Rem. Mag.

And if you don’t mind being seen with a cartridge and rifle that your grandpa’s grandpa’s grandpa proudly carried in the 1920s, tune up a fast-handling .30-06, stuff it with premium controlled expansion 180-grain to 200-grain bullets, and be assured: your moose isn’t going to like it.