How to Call More Coyotes into Shotgun Range 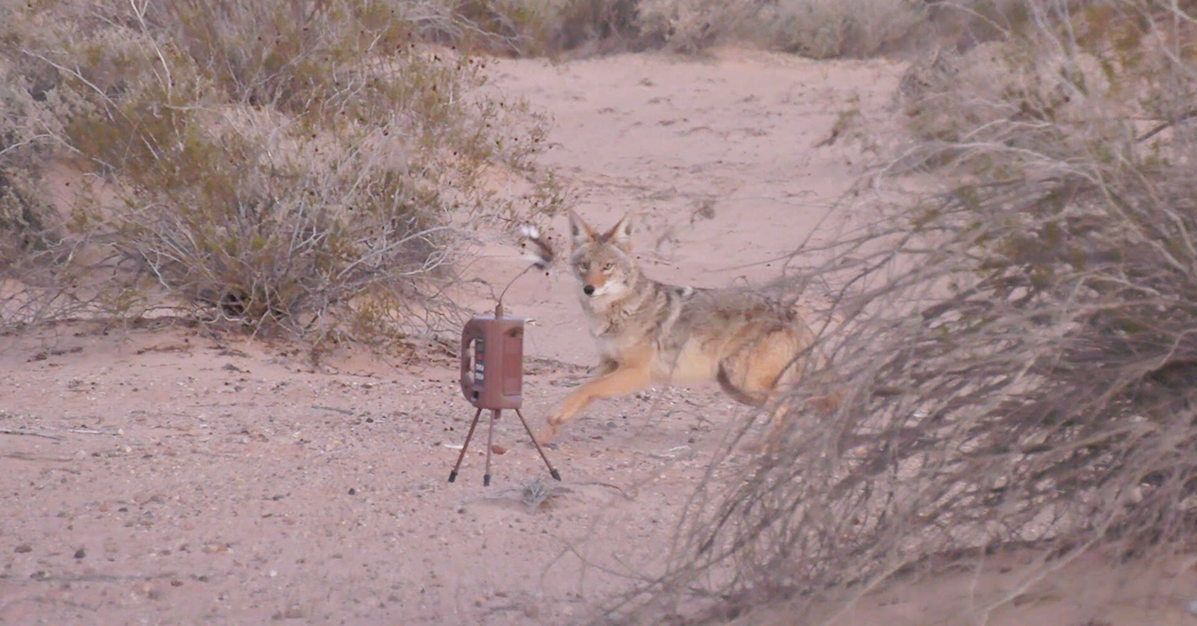 Shooting coyotes in close to the decoy is addictive. Mojo Outdoors
SHARE

If you’ve been in elk country when the bulls are bugling, love shooting ducks over the decoys, or calling in a strutting spring tom, you know how addictive (and thrilling) it is to take a wild animal at close range. Well, despite the long rifle shots at coyotes you often see on outdoor TV or YouTube (or hear your buddy lie about), many of the opportunities you’ll have to take a coyote come inside of shotgun range (whether you anticipate it or not). There’s no arguing that a reliable 12-gauge is just as deadly, and valuable, as a bolt gun for chasing fur. And you should always carry one—no matter if you’re hunting the deep woods or out West in the big, wide open.

But close shots don’t have to remain incidental. You can also set up to kill more coyotes in close on purpose, so you’re ready to pull the trigger when a song dog sticks his head out from behind a tree at 30 yards. Here are some proven tactics from two predator experts (and one outdoor writer) that will put more coyotes on the fur sled.

1. Sneak into Your Stand

Just like hunting deer from a treestand, you want to be as stealthy as possible when hiking into a coyote set. Terry Denmon, owner of Mojo Outdoors, has killed apex predators across North and South America, and lives by a strict methodology he calls “the pie” when entering a coyote’s range.

“Once you get into a coyote’s area—the pie—you have to monitor the wind even when you’re driving in the truck,” Denmon says. “If possible, I like to drive the truck into the wind, so coyotes don’t smell it. Also, if they get a glimpse of your truck, they are gone, so you have to park in a place they won’t be able to see it.”

In hill country and mountainous areas, you can get closer to the hunting location in a vehicle because the rugged topography often keeps your truck out of sight. In the flatlands, you’re going to have to park farther away and walk longer distances so the song dogs don’t spook.

“You can’t cover as much ground down here in the Delta, because there’s no place to hide,” says Denmon, who lives in Louisiana. “Some guys like to use ATVs to get in farther, but I don’t like them. They are louder, and if a coyote is nearby, it’s not sticking around.”

Once you have a stand scouted, make sure you sit in a place that allows you to see a coyote coming. That could be a knob or any small rise (Denmon carries a portable stool to sit on). Don’t skyline yourself (the practice of walking or sitting on the top of a ridge with only the sky as a backdrop) because a coyote is going to pick you out. Find a tree, hedgerow, even a piece of farm equipment to break up your outline.

“I like to focus on travel corridors and saddles, and then find some high ground, like the top of a hollow or draw,” says Abner Druckenmiller, of FoxPro Game Calls. “You don’t need a wide-open area to kill coyotes. Just focus on natural travel paths, like logging roads and deer trails that lead into a wood lot or pasture.”

During day hunts, Drukenmiller brings a buddy whenever possible. Close-quarter sets are often in dense cover and with another pair of eyes, the chances of shooting a coyote go up.

“I like to place a second hunter away from my position,” he said. “If it’s just me out there, I can only see 50 yards or so, but with another guy, we can cover maybe 100 to 150 yards. That makes a big difference.”

4. Always Be Ready to Shoot

If a coyote comes in, it’s going to happen fast. You should pair an electronic caller with a decoy (FoxPro and Mojo both make good ones), because predators key in on the sound and motion of the decoy. Coyotes aren’t going to stop like a deer. They are too smart to expose themselves like that. So, you need to have your shotgun ready to shoot from the moment you turn the call on because he will be there and gone in an instant. You won’t have time to pick up the gun if it’s lying on the ground beside you.

“If you watch our show, Mojo TV, you will see that we don’t worry about hiding behind too much brush because we need to shoot quick,” Denmon says. “A lot of times, coyotes will respond immediately. Our fastest timed response was 22 seconds, but typically it’s going to happen in the first five minutes unless it’s a bobcat. They come in much slower.”

Any shotgun will suffice, just so long as it is reliable. Semi-autos are the best in case you need a quick follow up shot or multiple coyotes come in at once. Denmon likes to use TSS loads from Apex because they are effective at extended ranges. He can reliably kill a coyote past 50 yards with them. Drukenmiller is more concerned with pattern density.

“I like those Hornady varmint shells, because where I am, in this thick cover, you need more pellets to penetrate through brush and get to the coyote,” he said. “T shot is great if you have a coyote in the clear, but I’m looking for a higher pellet count, so I have the best opportunity to connect. Even if I just slow him down on the first shot, I can kill him with a second.”

5. Set the Trap in the East

Calling any animal—elk, deer, ducks, turkeys, etc.— is an art form, and it takes time to learn all the sounds that can lure a coyote in close. Drukenmiller’s go-to calling strategy in eastern states, where coyotes are often more vocal, is to start off each stand with a female howl or a young coyote howl, which is typically just a short yelp you can learn to do with your mouth; beginners can use an e-caller. If he doesn’t get a response or a coyote doesn’t show up in the first few minutes, Drukenmiller will play growls (sometimes he will just growl with his mouth) or hit a pup-in-distress sound on the e-caller.

Many times you’ll get a glimpse of fur or see a coyote hang up at the 80- to 100-yard range. It’s no big deal if you have a clear shot and a rifle in hand, but we are trying to get these wild dogs into shotgun range.

“Any kind of soft squeaks from the e-caller should bring them in,” Drukenmiller says. “You definitely want to pre-program a high-pitched squeal into you FoxPro.”

You can also just rapidly kiss the back of your bare hand (this doesn’t work so great if you have a glove on, as I’ve found from personal experience). The idea is to make any kind of noise that’s not overly loud, but has pitch to it. A so-so predator hunter I have spent too much time in the woods with carries a small dog toy that squeaks. He keeps it on his compound bow during deer season too in case a coyote shows up. It actually works pretty well, as long as it’s not too windy.

6. Set the Trap in the West

One misnomer is that hunting coyotes out West means taking long shots because it’s bigger country. And while it’s true that there might be more chances to take a 500-yard poke at a coyote in the West, Denmon says he has plenty of close encounters in places like Texas, New Mexico, and Alberta.

There are all kinds of elevation changes in the west and coyotes use the hills, valleys, and coulees to move without being detected. That means you might never see one coming until he briefly exposes himself while looking for an easy meal.

“I like to offset the e-caller about 30 yards in front of me,” Denmon says. “He’s coming to the sound of that call, and if it’s directly in front of you, that coyote is more likely to look past the caller and decoy, and see you.”

Target as many thick draws as you can. Coyotes feel more comfortable in them, because the brush gives cover and keeps them hidden. If you’re hunting really flat regions, like west Texas, use the mesquite and small cedar trees to hide, and always look for water. In dry years there are going to be few natural water sources, and sitting over water tanks can be a good place to surprise a coyote.

“Everyone wants to go west and sit in the wide open,” Drukenmiller says. “But you will have more success in areas where coyotes feel safe and aren’t as pressured.”

If Druckenmiller hears a coyote howl or is hunting a place where he knows coyotes are holed up, he cuts the distance. Just like a turkey hunter might slip his boots off and put the sneak on an old tom that keeps gobbling but won’t budge, Druckenmiller closes the gap if the set up is right. There will be a lot of trial and error with this tactic, and you will fail more times than not. But if you feel like there’s a coyote close by and it’s just not going to make a move, you can move yourself.

“You can’t be afraid to get up and go after them,” Druckenmiller says. “But it has to be an ideal situation. You need some good cover between you and the coyote, and the wind has to be in your favor.”

Shooting a coyote can also be opportunistic. During spring turkey season, birds are more vocal, giving away their location to predators, and they will key in on your yelps. If possible, I always make my turkey sets with the wind in my favor so if a coyote does come in, it won’t sniff me out.

You may not want to ruin your turkey hunt by shooting a coyote, but I rarely get the chance to kill them close anymore. And there are few things I find more satisfying than watching a coyote slink into 10 steps of my hen decoy, and center-punch him with a payload of lead 4s.