Results from a three-year mortality study of Wisconsin whitetails revealed human hunting is the leading cause of death among the... 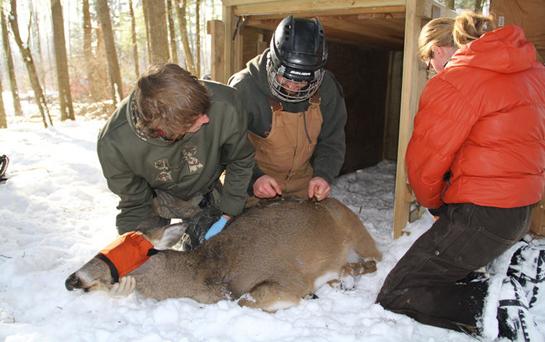 Results from a three-year mortality study of Wisconsin whitetails revealed human hunting is the leading cause of death among the state’s deer. Now that might not come as shocking news, however, other details from report are fascinating.

Wisconsin launched its largest ever deer research initiative in 2009 when University of Wisconsin scientists teamed up with the Wisconsin Department of Natural Resources. Researchers shared their most recent mortality data from 2013 with the Journal Sentinel.

For the study, researchers and more than 1,000 volunteers radio-collared deer during the last four years. Officials established two zones for the study: the state’s northern forest and its eastern farmland region. In both regions the results from 2011 to 2013 show human hunting was the leading cause of mortality among yearlings and adult deer of both sexes.

In comparison, eastern farmland mortality rates break down to 53 percent human hunting, 17 percent vehicle collisions, 4 percent starvation, and 2 percent coyotes. No wolf deaths were recored in the eastern farmland since the area isn’t currently home to any known wolf populations. There is also a greater density of roads in east central Wisconsin compared to the northern region.

Mortality rates reflect the percentage of deer that died. On average, 73 percent of does and 47 percent of adult bucks in the northern study survived the year. While humans and predators are largely responsible for deer deaths, weather also played a role in 2013 deer deaths. Last year was a particularly significant year for snow and cold temperatures that lasted until May in northern Wisconsin. Of the deer that died in the north last year, 18 percent of does, 24 percent of yearling bucks, and 11 percent of adult bucks succumbed to starvation. The previous high among any cohort in the study occurred in 2011, when 8 percent of does died from lack of food.

A related study on fawn mortality also reveals interesting trends in survival rates. Researchers kept tabs on fawns during the summer and discovered on average 58 percent of northern fawns and 76 percent of eastern fawns survived for at least eight weeks.

Of the fawns which didn’t survive summer in the northern region, 79 percent were killed by predators. Eleven fawns were taken by unknown predators, nine were killed by black bears, and coyotes and bobcats each killed six fawns. The eastern farmland region showed a different leading cause of fawn death. Starvation and other natural causes were cited for half of fawn deaths, while predators were responsible for 36 percent of deaths. Coyotes topped the charts as the dominant predator with eight fawn kills, and four fawns died from unknown predators. One fawn each was taken by a bear, bobcat, and a domestic dog.

Although the fawn study concluded its research in 2013, data collection for yearling and adult deer will continue through early 2015.