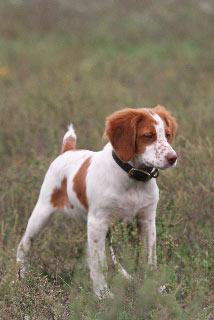 Once at the top of my next-dog list, the Brittany – formerly known as the Brittany “spaniel” – is a medium-sized dog ranging between 30 and 40 pounds and topping out at 20-1/2 inches, according to AKC standards. While I’ll probably go with another Lab (for waterfowling reasons), the Brittany is still a personal favorite when it comes to pointing breeds.

Named for the French province where it originated, the Brittany is just a cool little dog with personality and drive. Until very recently they were classified as spaniels with the note that they were the only pointing spaniels; their name has since been changed simply to Brittany to reflect their pointing style and most likely heritage (they might have been crossed with “English pointing breeds” more than 100 years ago, which increased their hunting abilities).

Popular in show and hunting circles, make sure you get a little spitfire from field lines if you plan to hunt them. If I were starting to look for a pup, which I still might, I’d probably start with the Smith line of Brittanys. While they’re not the only people producing good Britts, they’ve been breeding a line of the orange-and-white field dogs for decades, including champions. That and I personally know Ronnie Smith and trust his assessment and ability to produce good hunting dogs.

These little dogs work and run hard. They’re not English pointers, but they’re not some fancy dog either; they’re legitimate bird dogs that can pull double duty as hunting partner and family companion, and don’t need tons of room like a bigger dog.