Study: One Sit in the Deer Woods Equals Three Days of Pressure for Mature Bucks 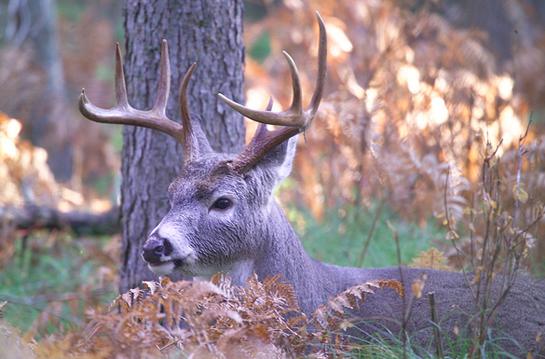 In a recent study of South Carolina bucks, just a single day of light-impact hunting made bucks avoid the area for several days.

At the recent Quality Deer Management Association conference, Ohio DNR biologist Clint McCoy presented findings of a new study of buck movements in South Carolina. While a grad student at Auburn University, McCoy placed GPS collars on 37 bucks living in the Brosnan Forest of the South Carolina low-country. The tracking equipment on bucks ranging in age from 1.5 to 4.5 years of age and older enabled McCoy to get a bead on each buck’s location every 30 minutes from Aug. 24 through Nov. 22. Breeding season occurred between late September and October.

The 6,400-acre study area consists of high-quality deer habitat: a mix of long-leaf pine stands, oak trees, and swamps. More than 100 food plots and 60 feeders keep deer on the property. Tractors and ATVs were used to transport hunters to their stands, so there was minimal intrusion on the deer.

Hunting season on the property opened on Sept. 15 and extended through the study period. Around each of the 100 hunting stands on the property, McCoy designated a visual danger zone, meaning bucks that moved through the area while visible to a hunter on stand were at risk of being harvested. After studying the data, McCoy was surprised to find how bucks’ experiences with hunter-occupied stands affected their patterns over the next several days.

“After a hunter had sat in a stand for just one day, bucks would stay out of the danger zone of that stand for the next three full days, meaning they wouldn’t return, on average, until the fourth day,” explained McCoy. “This finding wasn’t affected by whether a hunter had shot; just occupation of the stand made deer alter their movements.”

By the end of the study period, adult buck movements averaged 55 yards farther away from stands than on Aug. 24. Yearling bucks showed no difference in their average distance from stands as the season progressed, although it should be noted that hunters didn’t harvest yearling bucks.

Finally, most hunters assume that older bucks are just smarter than younger bucks. For example, we think that mature bucks have survived by quickly learning how to avoid hunting pressure. That assumption didn’t hold up in McCoy’s study.

“When I calculated the probability of each buck staying out of the danger zone of each stand location, age had no effect on the likelihood of bucks staying clear of hunters,” McCoy noted. “Older bucks didn’t stay out of danger zones any more or less than younger bucks.”

The bottom line? Keep track of how often you hunt your stands, and make sure to mix things up. If you’re not careful, you could overhunt your favorite spots before you know it. For more info on mature buck movements, check out QDMA’s research roundup here.