This Just In: Feds Plan to Delist Yellowstone Grizzlies—and Hunting Is a Possible Management Option

Will we be hunting grizzly bears outside of Yellowstone National Park next year? That’s one possibility after a surprise announcement... 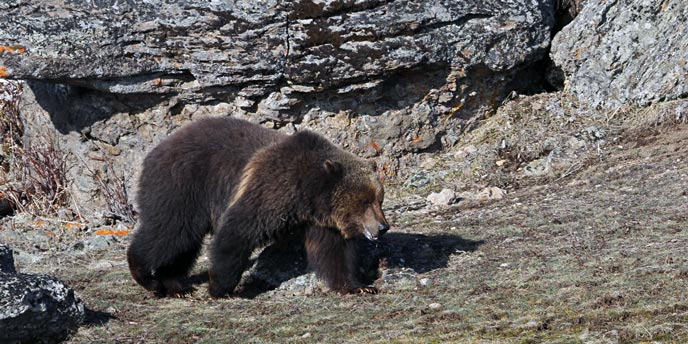 Will we be hunting grizzly bears outside of Yellowstone National Park next year?

That’s one possibility after a surprise announcement by the feds this afternoon. After more than 30 years of federal protection, grizzly bears in the 3-state Yellowstone ecosystem could be removed from the Endangered Species Act within a year, and sanctioned hunting could be used as a management tool by states to keep populations in balance with the habitat.

The U.S. Fish & Wildlife Service announced this afternoon that it has begun the process of delisting the bears, which roam the backcountry of Wyoming, Montana, and Idaho around America’s first national park. The reason protections are no longer needed, said Service Director Dan Ashe: “The overwhelming peer-reviewed scientific information at our disposal indicates the Greater Yellowstone Ecosystem of grizzly bears is biologically recovered.”

Ashe, speaking in a conference call with reporters, cited population surveys over the past decade that indicate bear numbers have plateaued. He said they have fluctuated over the past several years, but that population growth has slowed and stabilized, “which tells biologists that the ecosystem is at or near carrying capacity.”

Instead of continuing to fill up the Greater Yellowstone Ecosystem—a 22,500-square-mile area of the Northern Rockies—grizzlies are starting to spill out of the ecosystem and disperse into other habitats. Ashe said federal protections will remain in place as bears leave the Yellowstone area and disperse to other areas, including those connecting to intact populations of grizzlies north in Canada.

“We are regularly seeing grizzly bears more than 80 miles out in the prairies, and we expect to continue to see dispersals of bears” from their core habitat. Ashe noted that the Yellowstone Ecosystem’s griz population has increased by more than 500 percent since they were first listed as an endangered species in 1981. The most recent survey put the Yellowstone population at around 700 individuals, but Ashe noted that that is a conservative estimate, and that the real number is likely about 30 percent higher, or close to 1,000 bears.

THE FUTURE OF BEAR HUNTING
Today’s announcement marked the beginning of the end of federal protection, but the delisting strategy requires the states of Idaho, Montana, and Wyoming to develop grizzly bear conservation plans that guarantee populations don’t fall below certain threshold numbers. The states will be drafting those conservation plans this spring and summer. Part of the process will be engaging state fish-and-game commissions to draft hunting rules and limitations.

The last time federal protections were proposed to be dropped, in 2007, hunting was not implemented, and the Service ended up keeping Yellowstone grizzlies on the ESA, because lawsuits claimed that the habitat was too fragile to sustain the “discretionary mortality” represented by sport hunting.

This time may or may not be different, said Ashe.

“The governors of Wyoming and Montana have not yet decided whether hunting will or won’t be allowed immediately,” he said. “Their game-and-fish commissions will be going through a corollary process to ours. They will complete their regulatory processes prior to our final rule (to delist). We will see the sum and substance of their process, and they will be bound by the discretionary mortality limits that are detailed in the conservation strategy. But hunting is one of the management tools allowed. It will have to be carefully managed, but I’m encouraged that it can be.”

The good news for would-be grizzly bear hunters: you can influence the process of both the states and the USFWS. Watch for public-comment opportunities as the three states set hunting rules. Meanwhile, the proposed delisting rule, and the supporting documents, will publish in a couple days in the Federal Register. The USFWS will be seeking review and comment by the public, other federal and state agencies, and independent scientists. Comments will be accepted for 60-days after publication. You can submit those electronically at Regulations.gov. In the Search box, enter Docket Number FWS–R6–ES–2016–0042, and then click on the “Comment Now!” button

Photograph of Yellowstone grizzly via NPS