Survival Skills: The Do’s and Don’ts of Wielding a Tactical Pen

Can the pen be mightier that the sword? Maybe, if it’s a tactical pen. The modern tactical pen is really... 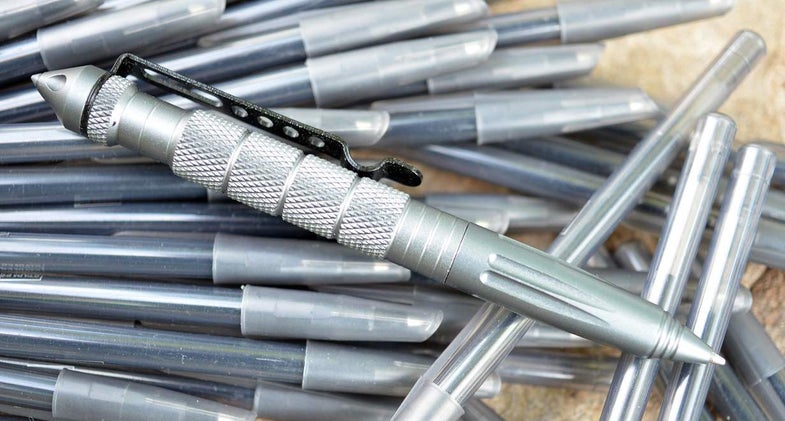 Can the pen be mightier that the sword? Maybe, if it’s a tactical pen.

The modern tactical pen is really two different things–it is a functional writing implement, but it is also a weapon for self-defense. Many people trace the lineage of this discreet back-up weapon to the original Kubotan, the self-defense “spike on a keychain” developed by Grand Master Takayuki Kubota in the 1970s.

But regardless of its origin, contemporary tactical pens can deliver a painful prod or a vicious raking to an opponent–should you become separated from your primary weapon. And the best part is that these low-key tools are non-threatening and generally ignored by the public and assailants. But before you add one to your EDC gear, there are some do’s and don’ts to consider.

DO carry it somewhere handy. Like any weapon, the tactical pen does little good if it is buried in the bottom of a backpack or purse, or sitting at home on your desk. These pens can be carried in your shirt pocket, in your jacket or pants pocket, in a checkbook or briefcase—just about anywhere.

DON’T let this be your one and only weapon. There’s a Darwin award just waiting for the guy who only brought a Kubotan to a gun fight.

DO make use of all your options. Tactical pens, like any other Kubotan cousin, aren’t just for poking people. If your pen has a blunt end, you can use it to strike any vulnerable spot, but it can also be ground and twisted into an assailant’s skin to control them. This works best on pressure points and other tender spots. The pointed “writing” end of the pen can deliver shallow puncture wounds, apply intense pressure to tender areas, and do a vicious number on a bad guy’s rib cage. Just imagine how you’d feel (and how your breathing would be affected) with a sharp instrument driven between your ribs and then raked across them. Don’t be scared to go for a stab to the eye or neck either; these strikes could disable your opponent, or at least turn the tide in your favor.

DON’T expect an ordinary pen to perform the same functions. Tactical pens are ruggedly designed and built for fighting. Your ordinary flimsy fountain pen is not. Don’t expect a rubbery Bic plastic pen to hold up to the task of self-defense. I’m not saying that it can’t work as a weapon—it’s just not a very durable one. Interested in a guide to improvised weaponry? Click here.

DO the double tap. One brisk poking with a pen will not dissuade a serious attacker. Multiple strikes are your best approach. Stab or rake repeatedly for the most likely repulsion of an attacker.

Do you carry one of these tools? Ever had to use it? Tell us your story in the comments.