How To Catch Giant Paddlefish with Giant Hooks 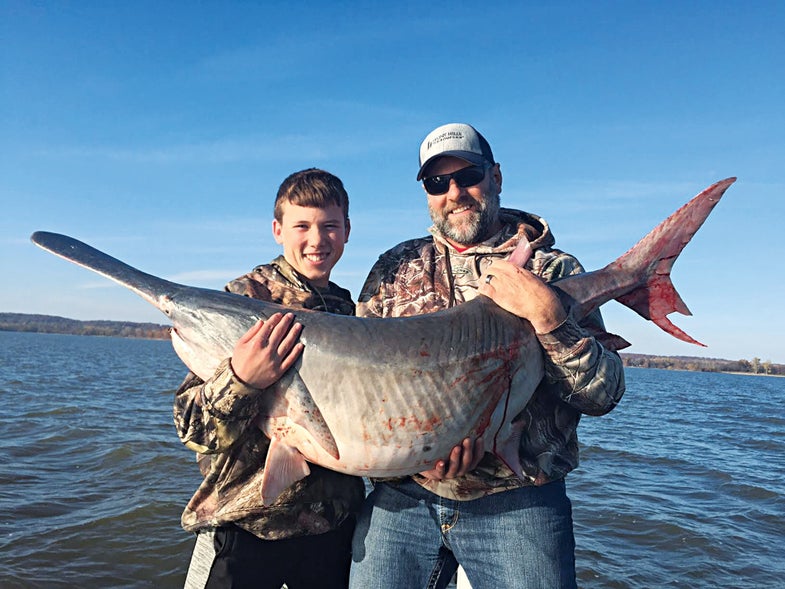 Dreams among paddlefish snaggers are as big as the mighty fish they pursue. Keith Kissinger, of Brumley, Missouri, remembers well the largest paddlefish he ever stuck—an 84-pounder he snagged with a 10/0 treble hook. It left him with aching muscles from head to toe, but it was a good sort of pain. Paddlefish, or spoonbills, as many anglers call them, have been caught in a time warp, having survived the Ice Age and the effects of meteorite impacts. Fossil records of the odd-looking fish date back over 300 million years, almost 50 million years before the first dinosaurs appeared.

Today, healthy populations of these ancient fish can still be found in the major waterways of the Midwest, primarily the Missouri and Mississippi rivers and their tributaries. Paddlefish are plankton feeders. To catch one, fishermen gear up with broomstick-like rods, braided line, heavy weights, and large treble hooks. These “snaggers” border on fanatical, and you can count Kissinger among them.

“Catching a big spoonbill is everyone’s dream,” says Kissinger. “A fish that big is unbelievably strong, especially if it is hooked in the tail. Toss in current, like that on the Osage River, below Bagnell Dam at Lake of the Ozarks, and you are in for the fight of your life.”
The rigors of pursuing paddlefish—navigating the big rivers, yanking heavy lead weights and large treble hooks through the water and spending long hours trying to snag a behemoth—make this a game for hardy individuals.

“It’s a lot of work to boat a big spoonbill, and a little teamwork with a few fishing buddies makes the job easier on everyone,” says Kissinger. “Also, if there are a lot of fishermen on the river, one guy has to run the boat to avoid getting tangled in others’ lines.”

Eight-foot snagging rods and baitcasters spooled with 108-pound snagging braid are the norm. Weights from 6 to 10 ounces are tied on the line about 2 feet above a 10/0 treble hook. After casting, jerking, and reeling continuously, most guys need a break every 20 minutes. Snagging is not for the weak of heart either.

The Missouri snagging season generally starts in mid-March and runs until the end of April. The daily limit is two. There is a 34-inch minimum length limit on Lake of the Ozarks and its tributaries. Check regulations before fishing.

Unlike in neighboring Missouri, the Oklahoma paddlefish season runs year-round. “That makes for a lot of paddlefishing time,” says Grove resident Rusty Pritchard. “I guide for paddlefish from December first until the middle of May.” Pritchard was not born into a fishing family. However, a fishing neighbor, Ernie Bennett, introduced him to the sport at age 10. It changed his life forever. Pritchard took paddlefishing to a new level two decades ago when he began guiding on Grand Lake and the Neosho River, which, he says, offer incomparable opportunities. His bragging board provides some serious confirmation. Pritchard’s clients boated more than 1,500 spoonbills in 2014 and more than 1,000 in 2015.

During the winter, Pritchard trolls the channels and drop-offs of Grand Lake. “Spoonbills hang in deep water most of the time,” he says. “I commonly troll in water 120 to 170 feet, and good electronics help me avoid snags.

Pritchard has decades of experience on Grand Lake and generally knows where paddlefish are located. He refines his search by trolling drop-offs until he spots fish on his fishfinder. Although traditional paddlefish-snagging tactics can be effective, Pritchard leaves the heavy weights at the dock.

“I developed a system of trolling where the boat does all of the work,” says Pritchard. “I utilize Dipsy Divers—metal discs—which pull the snagging hooks down to the depths I need.”

Pritchard’s tactic takes out the monotonous strain of jerking heavy terminal gear through deep water, but leaves in the thrill. It’s also very effective. His customers have accounted for four of the top five fish taken out of Grand.

As the spawn approaches, Pritchard moves to the Grand and Neosho rivers. “Paddlefish often stage in deep holes preparing for the spawn,” he says. “The action on the rivers is great fun, and a lot of memories are made there.” Mixed with a little bit of pain, of course.