How to Catch (and Eat) Eels

To most anglers, eels are bait. To others, they’re a damn good fighting fish and prime table fare 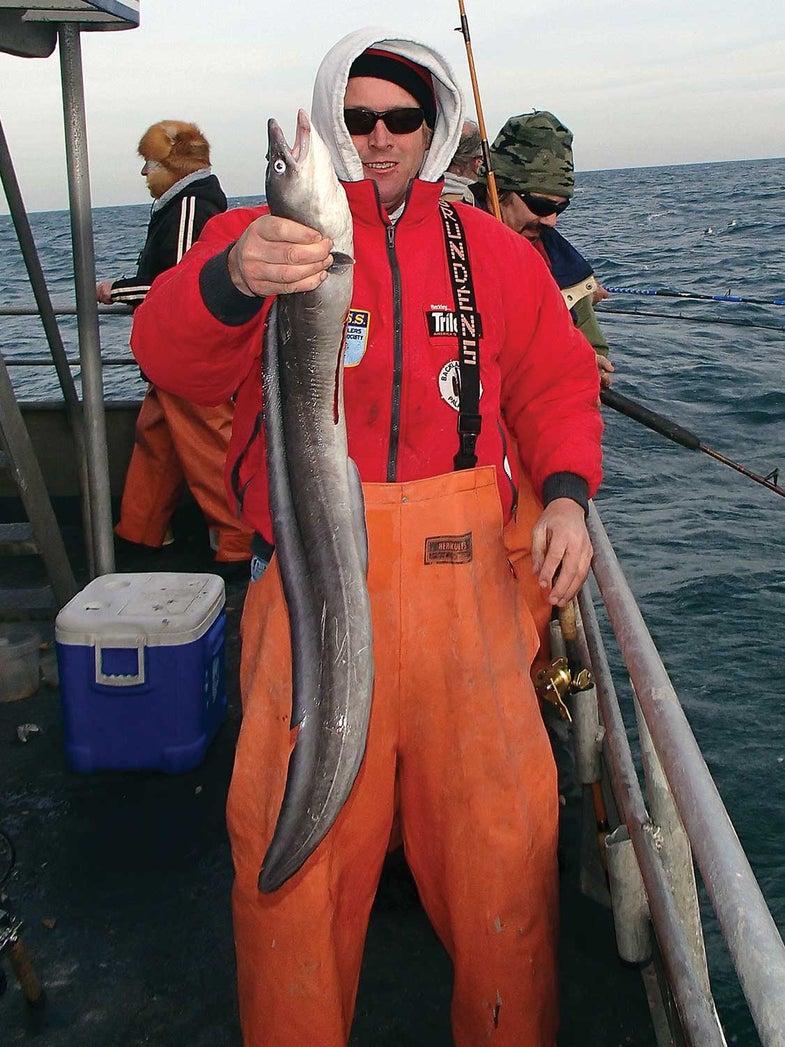 Conger eels about to hit the deck aboard the party boat Dauntless off the coast of New Jersey. Nick Honachefsky
SHARE

Eels aren’t glamorous. In fact, among fishermen, eels generally fall under the classification of undesirable—unless you’re using them to catch stripers and cobia, but that’s an entirely different story. But here’s a quick story about eels—at least, one of my earliest remembrances of them—that may make you appreciate their virtues.

It was a sweltering summer weekend in Hunterdon County, N.J. I was just out of high school, and after cutting the grass for Mrs. Scheier, our former high school health teacher, Chris “River Rat” Lido and I had big plans. We “borrowed” a half-empty bottle of Jameson whiskey from the Scheier’s liquor cabinet and set up tent stakes on the muddy banks of the South Branch of the Raritan River for an overnighter. There, we rigged up and cast out nightcrawlers, gently laying our rods down on V-sticks broken from the nearest oak tree. It didn’t take long for the excitement to begin. Almost immediately, Lido reeled in a 2-foot-long slimy, slippery, snakelike creature. Excitement turned to pure elation a short time later, when the thick chunks of eel meat hit the bacon grease in our cast-iron skillet. We eagerly picked the meat off the thin bones, added a whiskey topper, and feasted like kings. It was a righteous meal.

The range of the American eel probably spans a wider group of latitudes than any other species in North America. They are currently found in 36 U.S. states—mainly east of the Rockies—but are most prominent in freshwater streams and lakes along the Eastern seaboard from Maine to Florida, the Gulf States, and the Mississippi River basin.

But why, you might ask, would anyone purposefully fish for eels? For one, they fight like mad. For another, sometimes you just have a yearning to fish for anything that pulls.

“Eels are opportunistic feeders,” says Lido, who is now media coordinator for the New Jersey Outdoor Alliance. “American eels feed by scent, and catching them requires a stinkbait—whole, juicy nightcrawlers, herring or shiner chunks, or even nontraditional offerings like chunks of firepit hot dogs.”

The eeling rig is simple: 10-pound-test main line, a No. 4 to No. 2 baitholder or Carlisle hook, and a couple of split shots.

“The biggest of eels are most effectively targeted in the deepest fallen-tree, snag-infested holes off riverbanks and in coves of lakes and reservoirs,” says Lido. “The best daytime conditions are high, muddy-water periods. But if you really want to tangle with an anaconda-size slimer, focus your efforts on hot, humid summer nights when they feed under the cover of darkness.

“Cast a stinkbait into a slow-moving part of a river and let the rig settle on the bottom,” says Lido. “Aim a flashlight beam at the rod tip and be alert for subtle tapping bites. They will poke at the bait first before they abruptly devour it.”

The New Kid in Town

Two-foot-long American eels are fun to mess with on a hot summer’s night (check local regulations before targeting eels), but the slime does not end there. In the ocean, among the offshore shipwrecks and deep-water submarine channels from New England and to the Jersey Shore, swim eels that at first glance appear to be true mutants. Here, the conger eel is king and grows up to 7 feet long and 25 pounds.

Captain Butch Egerter of the headboat Dauntless out of Point Pleasant, N.J., sees conger eels come up from the crags and crevasses of the wrecks on nearly every 10- to 20-mile offshore trip throughout the spring.

“Put a chunk of herring, bergall, or salted clam down on a bottom rig with a 50-pound monofilament leader, a size 4/0 octopus hook, and an 8- to 10-ounce bank sinker, and you’ll get knocked by a conger,” says Egerter. “They’ll fight like no other fish, usually snapping lines or giving anglers a good up-and-down battle. If the fisherman manages to get the eel to the surface, we gaff it. Most guys love to eat the eel’s tender white meat.” Egerter cuts the eel into chunks and suggests boiling it down, to soften the meat, and then preparing it in a stew.

Eels, freshwater or saltwater, aren’t for everyone. But if you know how to fish for them and, more important, skin and cook them, you’ll be surprised what your gut says after you down a tender, succulent piece of eel meat. It’s best with a whiskey chaser.