How to Catch Largemouth Bass on the Ice this Winter 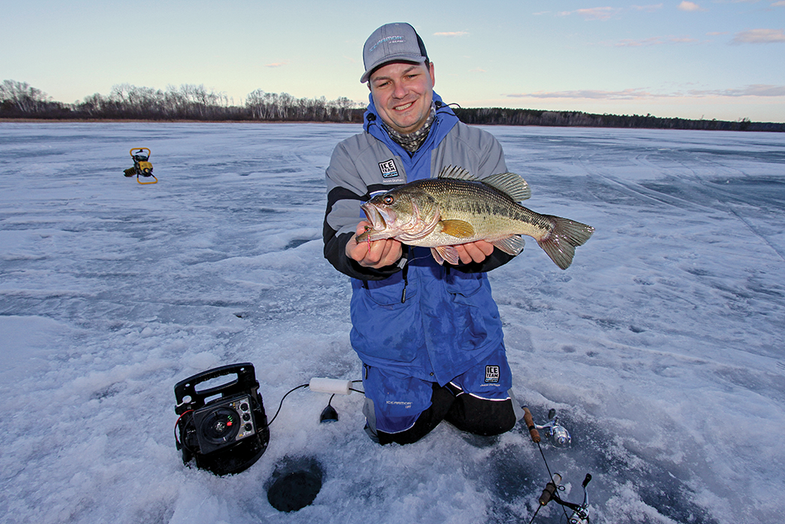 Among winter-fishing targets composed of popular eater species like walleyes, trout, and panfish, largemouth bass generally get short shrift. That’s a shame—whether due to the catch-and-release mindset of many bass anglers or the largemouths’ undeserved reputation as a muddy-tasting morsel. However, icefishing and largemouth bass need not be mutually exclusive. Hard-water season concentrates your opportunities, and if you’re inclined and it’s legal to keep a few fish for the table, they will never taste any better than they do in winter.

“I think largemouths are an absolute blast,” says Clam Ice Team pro Jason Durham. “A lot of anglers believe that once the water dips below 50 degrees, bass are no longer active, but that’s not the case at all. They’re very active and not that difficult to catch.”

Durham, too, looks for largemouths in remaining weeds like water cabbage and coontail. Crisp, green vegetation is a must, as the fresh stuff holds the tiny forage that attracts the baitfish and bugs bass seek. Milky water in the hole indicates a lot of dying weeds, so look elsewhere.

Largemouths are inherently structure-oriented, so if there are no weed lines, North Dakota guide Jason Mitchell targets sharp breaks that come out of deeper water. Brosdahl adds humps, rock piles, and river channels cutting through shallow bays to the potential largemouth spots. His favorite: inside turns on a point.

Bass typically avoid the shallows during early ice, as toxins from massive weed die-offs push them to deeper flats. In bowl-shaped lakes ringed with dying vegetation, Brosdahl expects the bass to hold on whatever structure the lake’s middle offers.

Later in the season, bass often move shallower, as melting ice and cracks yield oxygen and nutrients that fuel a food chain.

Bait ‘Er Up
▶ Winter bass won’t pass up an easy shot at schooling baitfish, like plump golden shiners, but slower winter metabolism decreases their nutritional needs—along with their interest in chasing chow. That explains why panfish anglers often take bass on jigs as tiny as ¹⁄₆₄ ounce.

“Under the ice, largemouths are looking for morsels, not mouthfuls,” Durham says.

Noting the importance of a slow fall rate, Brosdahl says he likes the Northland Impulse Water Bug or any tiny creature bait with wiggling appendages on ¹⁄₁₆- to ¹⁄₈-ounce jig heads. Below the light-muting ice, glow jigs help bass spot your baits, especially in stained water.

Durham likes the flash and flutter of a ¹⁄₈-ounce Clam Rattlin’ Blade jigging spoon, and he finds that lightly shaking the bait beats ripping or pounding the bottom. Subtle natural colors top his selection, but he feels a bright finish might help draw in distant fish.

For added appeal, Durham tips the spoon with either a Clam Maki soft-plastic or a maggot trio. Maggots often convince sluggish bass, while aggressive fish dig that plastic trailer action. Also, plastics don’t freeze in extreme cold, and you don’t have to expose your fingers when changing baits. With either option, Durham tips only one hook on the spoon’s treble. This bunches the bait, minimizes the overall profile, and maintains the lure action.

For live presentations, Brosdahl hooks shiners under the dorsal on a 1/0 Kahle-style hook.

Bedeviling Details
▶ Cold water dampens a largemouth’s vigor, so in light weeds, a 30-inch rod with 3- to 4-pound fluorocarbon will handle even the big ones. If he anticipates hefty largemouths, Brosdahl uses an 8-inch auger bit and cuts a double hole, with the second opening overlapping the first. He’ll then use a hammer and a spud bar to whittle down the center points where the two holes meet.

“It’s twice the work, but if you get a real hog, you can get him up easier,” Brosdahl says. “You want to avoid pulling a hook, but you also want to return these fish to the water in good shape.”

Unless you’re planning to keep a couple for a midwinter fish fry.

Photograph by the author