How to Catch Muskies from Shore

It’s prime time for muskies. Now, get off the boat 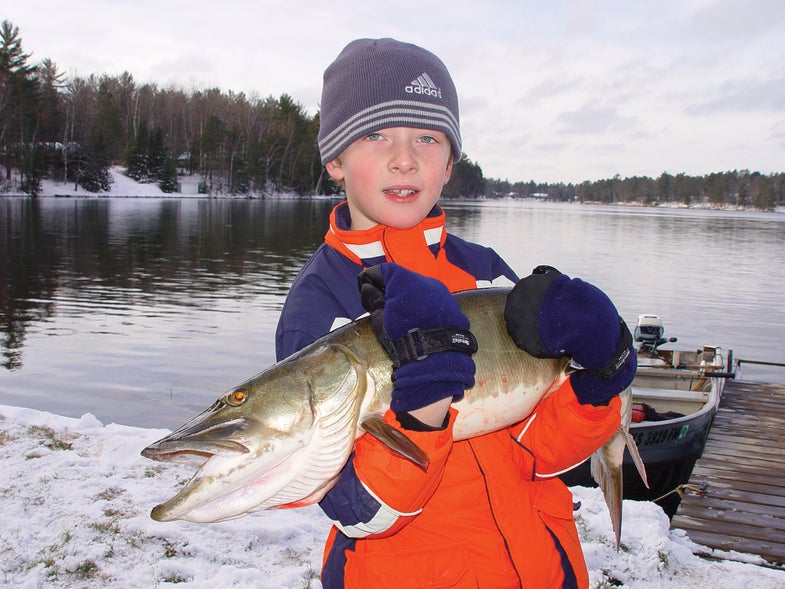 Skim ice sealed Little Saint Germain Lake in northern Wisconsin, but Ken Jackson had the itch to go muskie fishing. Looking for a friend to join him on what would most assuredly be a lark, he called fellow muskie nut Rick Mai. “Well, I needed someone whose weight could help me make some open water,” says Jackson with a smile.

“We used my boat like an icebreaker to create an open piece of water,” he explains. “It was the only fishable spot on the entire lake—and we caught a 40-inch muskie. Don’t know that I’ve ever worked harder to reel in a fish.” What makes the catch even more surprising was the location where it was caught.

Jackson—a full-time guide whose family owns Jackson’s Lakeside Cottages on the lake—broke the ice in front of the resort in order to fish from shore. As he and his buddy proved, shore-fishing for muskies need not simply be a passing impulse in late fall or early spring—it can be a very effective strategy to use on the days when the weather is bad. “As a guide, I can still take people shorefishing who don’t have the physical or mental toughness for the weather on an all-day boat trip,” says Jackson. “I can build a fire and cook food to warm everybody up. But the bottom line is, it’s an effective way to catch fish.”

Jackson certainly isn’t the first shorebound angler to catch a huge muskie on a miserable day, but he may be one of the few to actually concentrate on refining the technique—which includes beaching a boat, canoe, or kayak nearby.

In late fall, after turnover, much of a lake’s fish population begins to relate heavily to bottom structure. Muskies, in particular, use breaklines as travel routes, so Jackson looks for places with a steep breakline not far from shore. Typically, he wants to fish 18 to 32 feet deep, with some kind of woody cover nearby.

“Utilizing side-imaging electronics, I hunt for potential fishing spots all year,” he says. “I’ll bookmark them for later use. Then, in the fall, I use an underwater camera to pinpoint the exact location of those cribs and logs.”

Jackson baits his lines with big suckers measuring at least 13 inches. He prefers quick-strike rigs and uses his boat to place the suckers a short distance from the cribs or logs to best prevent hang-ups. A ½-ounce sinker keeps each sucker in place.

“If you don’t know the cribs’ and logs’ exact location, you’ll be snagged,” he warns. A line-counter reel ensures the correct distance from shore. When a muskie hits, seconds matter.

The exact bait placement required for shore-fishing has its advantages. Jackson recalls several times when he and his partners had a successful day, and then compared notes with boat anglers. “Their reaction is, ‘You caught how many?!’” Jackson says with a smile.

Studies by the Wisconsin Department of Natural Resources have proven that a swallowed live bait rig is usually a death sentence for a muskie. When used properly, however, a live bait rig causes no more harm to the fish than a bucktail. Since all serious muskie anglers want to safely release their fish, Ken Jackson advises they do the following:

—Use only quick-strike rigs.

—React quickly to a bite and set the hook as soon as the fish is moving away. Waiting longer does nothing but increase the odds of deeply hooking the fish. Even if you’re doing things right, a good hook-up rate is around 50 percent.

—Fish in a group of at least three anglers—while two are tending lines in the boat, someone is available to watch lines on shore.

—If the muskie is hooked in deep water, take your time fighting it to allow it to acclimate itself to the change of depth.

—After netting a muskie, leave the net bag in the water and unhook the fish there. Only lift it from the water for a quick photo.

Muskie quick-strike rigs typically consist of a single hook through a sucker’s nose plus one or two trebles.