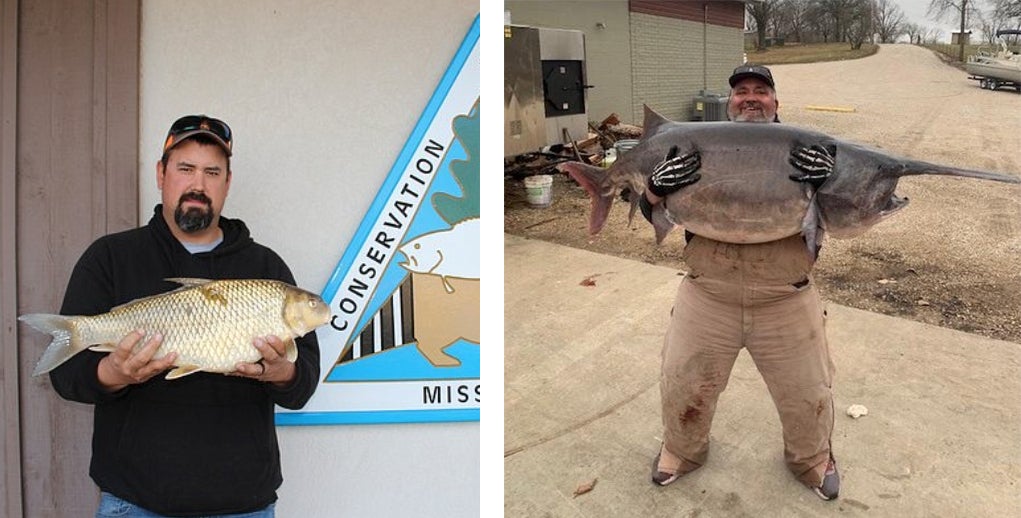 The Missouri Department of Conservation just added two new record fish into its State Record Fish Program. Josh Lawmaster’s quillback and Jim Dain’s paddlefish were both caught using alternative methods last week, and the records were officially confirmed by the agency on March 23.

Lawmaster became the first state-record holder of 2022 when he arrowed an 8-pound, 5-ounce quillback on Table Rock Lake on March 15. The Missouri resident told MDC that he was out with his bowfishing team targeting common carp when he shot the quillback, a species of carp that’s often confused with a river carpsucker.

“We knew it was [a] pretty good size,” Lawmaster told MDC. “But it wasn’t until the next morning we were thinking about it and decided to contact the department.”

After bringing in the quillback, MDC staff verified the fish’s weight on a certified scale in Springfield. The 8-pound, 5-ounce fish broke the previous record of 7-pounds, 10-ounces that was set in 2015.

The second state-record fish of 2022 was landed three days later at the Lake of the Ozarks. Jim Dain of Pittsfield, Illinois, snagged the monster paddlefish while on a fishing trip with his family, according to a press release from MDC.

“We weren’t having much luck but decided to fish for another hour, so we took another turn,” Dain said. “And that’s when the drag on the reel started. It felt like there was a tree on the line!”

Dain went on to explain that it took at least 20 minutes to land the fish. Back at the ramp, he just happened to run into a local angler by the name of Steve Henson, who currently holds the state record for a river carpsucker. Henson told Dain to contact MDC, and when he did, the agency directed him to Tom’s Slaughterhouse in Montreal, which had a scale big enough to weigh the behemoth.

Dain’s fish weighed in at 114-pounds, 10-ounces, which barely edged out the previous state-record paddlefish by one ounce.