Bowhunters and Crossbow Hunters Are Killing More Deer. Is That a Bad Thing? 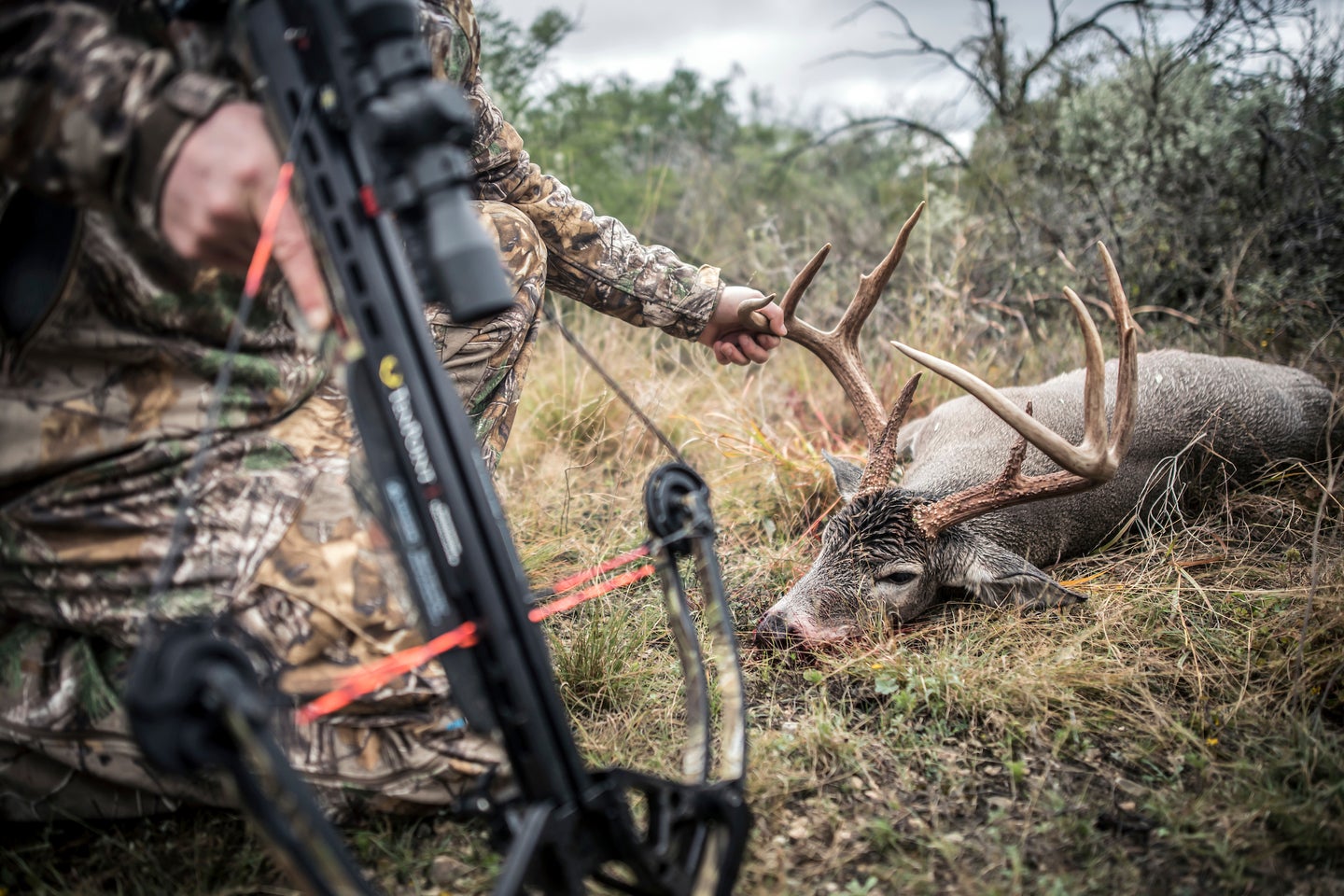 Bowhunters are taking an increasingly larger percentage of the harvest in many states. John Hafner
SHARE

When Roy Case recorded Wisconsin’s first bow-kill on Dec. 6, 1930, he was carrying written permission from the state’s chief game warden to hunt during the gun-deer season with his homemade longbow. Wisconsin didn’t hold the nation’s first archery-deer season until 1934. When bowhunters stalked the nation’s deer woods in 1969, just months after mankind’s first moon walk, they likely bagged less than 6 percent of all whitetails taken that fall.

That estimate is probably generous, given that it’s based on Wisconsin data, and few other states tracked bow-kills back then. More specifically, Wisconsin’s bowhunters in 1969 registered 5,987 (5.75 percent) of the state’s 103,995 deer-kill.

Fifty years later, bowhunters have crossbows, cellular trail cameras, digital bow sights and technology so advanced it would make Neil Armstrong jealous. Now, bowhunters take 25 percent of the 5.86 million whitetails killed in the U.S. and Canada, according to data compiled by the National Deer Association.

But no matter the era, modern hunters have always argued about archery equipment and its role in deer hunting—and deer harvest rates.

Even as today’s hunters debate archery’s impact on deer harvests and gun-season participation, biologists at universities and wildlife agencies mostly roll their eyes and consign the arguments to sociology and personal preference.

Wildlife managers might express concerns about archers’ focus on bucks, but none cite biological harm to deer herds as more hunters pick up archery gear, including crossbows. After all, overall hunter numbers keep declining across the U.S. while whitetail deer herds keep growing in towns and cities from Omaha to Atlanta to Hartford, Connecticut.

Regionally, the Northeast’s bowhunters accounted for 33 percent of their states’ 2019 deer harvests; followed by the Midwest, 27 percent; and the Southeast, 16 percent. (Deer-harvest reports from Western states generally don’t provide complete data by deer species or weapon type.) Even Massachusetts—which only allows crossbows for those with doctor-certified permanent handicaps—reports bowhunters accounted for over 40 percent of its deer harvest every year since 2013. All other Northeastern states except New Hampshire allow crossbows during at least part of the archery season.

John McDonald, a wildlife professor at Westfield State University in Massachusetts, said most increases in U.S. archery harvests are by design.

“Massachusetts isn’t the only state with growing suburbs, growing deer herds, and fewer places to gun-hunt,” McDonald said. “Our state responded to those challenges by opening archery season earlier and closing it later to increase bowhunters’ success rates.”

Howard Kilpatrick, a biologist with the Connecticut Department of Environmental Protection, notes that guns can’t be fired within 500 feet of occupied dwellings in his state. “In Greenwich, that means only 13 percent of the land area could be opened to gun-hunting, but it’s still impossible because that’s mostly parks, golf courses, and water-company land.”

Bowhunters, therefore, manage much of Connecticut’s deer herd. To provide more opportunities, the state in 2015 opened private lands to archers on Sundays for the first time. Kilpatrick said towns and residents also help by granting access.

“If you provide more time and places to hunt, you give hunters more incentives to go bowhunting,” he said.

Even though Connecticut has lost two-thirds of its licensed hunters since 1990, its bowhunters are controlling the deer herd. Connecticut drivers, for instance, used to road-kill 18,000 deer annually. That toll fell to 1,500 in 2019, and Kilpatrick credits bowhunters.

Their success renewed a different criticism, of course:

“Now our hunters complain that we knocked the deer population down too low, and they want bowhunting restrictions,” Kilpatrick said. “We’ll do some aerial surveys to assess the herd.”

Connecticut initially reported crossbows lagging behind compounds and other “vertical” bows after legalizing them in 2010. Crossbows then grew increasingly popular.

Kilpatrick said crossbows accounted for 28 percent of Connecticut’s archery kill in 2013, but their contribution climbed to 57 percent in 2020. C.J. Winand, a Maryland biologist who tracks bowhunting data for Bowhunter magazine, said that’s a common trend. He said crossbows generally become the archery season’s “weapon of choice” within three years of legalization.

Winand’s latest report shows crossbows in 2019 accounted for 50 percent or more of the archery harvest in 11 states. Ohio, which legalized crossbows for archery season in 1972, attributed 67 percent of its archery kill to crossbows in 2019, as did Michigan. Crossbows also accounted for 65 percent of Pennsylvania’s bow-kill, and in Delaware, 64 percent; New Jersey, 63 percent; Maryland, 56 percent; Wisconsin, 54 percent; Virginia and West Virginia, 53 percent; Indiana, 52 percent; and Tennessee, 51 percent.

Winand said crossbows typically plateau near two-thirds of the archery kill, but it’s often lower in states with longer, more varied firearms seasons. “All Southern states allow crossbows during archery season, but on average they account for 46 percent of their bow-kills,” he said.

“States are selling more archery licenses but most are still losing more hunters than they’re gaining,” Adams said. “We’re killing as many deer as a decade ago, but we’re spreading it out over the fall. We’re no longer concentrating it around opening weekend of gun season. Those extra opportunities cause changes not everyone likes. Some die-hard archers scream about crossbow hunters crowding ‘their’ season, and some die-hard gun-hunters think gun season has lost its buzz, its electricity.”

How much have bowhunter numbers grown this century? During the 1990s, most industry and outdoor-media estimated bowhunter numbers around 3 million. Dan Forster, the Archery Trade Association’s vice president and chief conservation officer, thinks current numbers are higher, but pinpointing a national total remains frustrating. He said some states include bowhunting privileges with general or firearms licenses, muddying the data. Many other states don’t track how many archers use crossbows, compounds, or other bows.

Forster said recent telephone surveys estimated the bowhunter population as high as 9.9 million. The ATA, however, doesn’t use such estimates because they’re widely disputed within the archery/bowhunting industry.

Winand’s estimate for Bowhunter magazine’s 2020 “Deer Forecast” put North America’s bowhunting population at 3.6 million. That’s a 17 percent increase from his 3.06 million estimate in 2001. Is Winand’s estimate solid? Forster chuckled and said: “Prove him wrong. Given all the ‘noise’ in license data, we can’t nail down that number. The most accurate approach is to evaluate each state individually.”

Whatever the actual total, Winand attributes much of bowhunting’s growth to expanded crossbow hunting. In 2002, only Ohio, Arkansas, Wyoming, and Georgia allowed crossbows during archery seasons. In contrast, 32 states now allow crossbows in all or part of their archery season, and only Oregon maintains a total ban.

Elsewhere, Minnesota allows crossbows for those 60 and older; five states allow handicapped hunters to use them during archery season; and 11 states, mostly in the West but also Iowa and New Hampshire, allow them during firearms seasons.

In fact, only 11 percent of Ohio’s deer hunters exclusively hunt its traditional seven-day December gun season. Tonkovich said that season remains popular, but participation rates have fallen from 85 percent to 70 percent, likely because many hunters prefer crossbows and archery season. He notes that crossbows are easy to sight in, they stay sighted in, and they don’t require regular practice—an inconvenient task in many suburbs.

Hunters are also changing. “Our hunters are getting older, on average, and they’re feeling colder, so they’d rather hunt earlier in fall when it’s warmer,” Tonkovich said. “Our gun-hunters also now hunt like bowhunters. They’re not doing drives. They’re sitting, waiting and watching bait. They’re placing trail-cameras and cutting shooting lanes. Our gun-hunters average 3.7 days of hunting. Many of them would rather pick and choose when to hunt during our four-month archery season.”

What Lies Ahead for Bowhunting Seasons?

And contrary to popular fears, the crossbow’s popularity is not shortening archery seasons. Crossbows, in fact, usually extend and protect long archery seasons. Kilpatrick said hunter support for crossbows hovered around 40 percent in 2010 when first allowed during archery season, but jumped to 80 percent by 2013. Likewise, Wisconsin deer hunters in 2020 rejected a proposal to restrict crossbows to October and December by a 47-44 percentage. By a 54-35 vote, they also rejected a proposal to close crossbow hunting from Nov. 1 until gun-deer season’s opener the weekend before Thanksgiving.

Forster, an agency veteran, isn’t surprised by such support. He joined the ATA after 30 years with the Georgia Department of Natural Resources, including 12 years as its wildlife resources division director.

“Wildlife agencies really don’t care whether hunters use bows or guns to reach the state’s deer-harvest objectives,” Forster said. “Hunters are the agencies’ constituents. Agencies listen to their desires as much as possible. If hunters like hunting with crossbows, and agencies have no scientific evidence that crossbows harm the resource, the agency has no reason to shorten the season. It’s easier to regulate the harvest by reducing or increasing antlerless quotas.”

“Crossbow technology seemed kind of stable in recent years, but then those devices came along,” Adams said. “I worry when we go north of limb-driven technology. Where do we draw the line?”

Forster said the ATA can’t tell wildlife agencies where that line belongs, but the ATA Board of Directors uses five specifications to define a crossbow. The first requires that it have a bowstring, energy-storing limbs, and the “geometry of a longbow, recurve bow, or compound bow that’s affixed to a stock.”

In other words, if the device doesn’t look like a longbow, recurve, or compound bow is mounted horizontally on a stock at a 90-degree angle, the ATA won’t deem it archery equipment. Likewise, if the device doesn’t meet the Internal Revenue Service’s definition for archery equipment, the IRS won’t  impose the 11 percent federal excise tax that’s mandated by the Pittman-Robertson Wildlife Restoration Act. Vertical bows, crossbows, arrows, and most archery accessories have been subject to that tax since 1972.

Even so, the IRS and archery industry don’t determine what hunters can use during bowhunting seasons. That duty belongs to each state wildlife agency and its hunting constituency, and both take the job as seriously today as 50 years ago.