Watch: Brown Bear Attacks Sow in Brutal Fight Over Cub, Dies After Both Fall Down Mountain

A huge male brown bear and sow bear are recorded fighting on a mountainside in Spain, resulting in a mortal plunge for one of the bruins 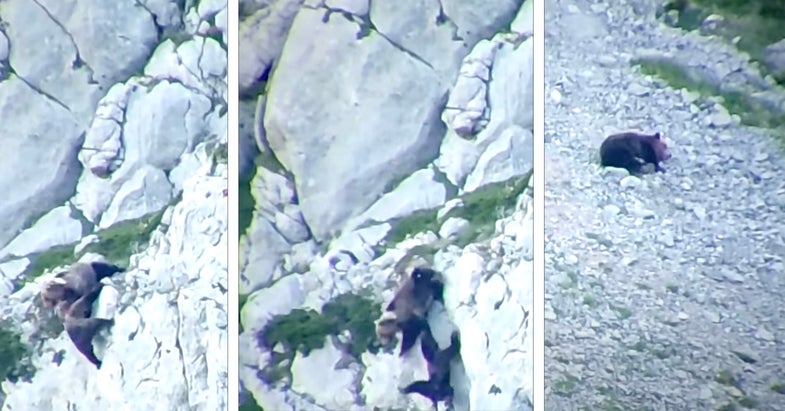 The bears fight for nearly two minutes before falling a long ways off the side of the cliff. via YouTube
SHARE

This three-and-a-half-minute video was recorded by Claudio Sordo Velasco on June 5 while he was hiking in the rugged and rocky Palencia province of Spain, north of Madrid. The footage shows a nearly 500-pound Iberian brown bear climbing a steep path along a rocky cliff up toward a much smaller female brown bear. A young cub is trailing behind her.

The male bear is moving fast toward the female bear, presumably to get at the much smaller cub behind her. The sow engages the larger male. The cub retreats backward over boulders and the overhangs along the steep and rocky mountainside, while the two adult bears fight ferociously on the cliff side.

The face-to-face fight between the two adult brown bears lasts over a minute, with the much larger male bear clearly in control. Several times it appears the boar will push or throw the smaller sow off the cliff. But the female bear holds her ground as the cub backs mostly out of view.

The fight is brutal, and the bears leave bloodstains on the rocks. About two minutes into the video, both bruins lose their footing and fall off the mountainside, tumbling, bouncing, rolling, and crashing end-over-end down the boulder-strewn cliff.

The smaller sow falls much farther down the mountainside, sliding to a stop on the scree and lying there without moving. The boar stops farther up the mountain, lying still beside large boulders it has hit on the way down. Eventually the battered boar stands, looking stunned and injured. Both bears appear to survive

There Velasco’s remarkable footage ends. Another version of the same video on Fox 5 TV concludes with a series of photos from Castile and Leon local governments. Velasco alerted government officials of the incident, who later found the boar dead from its injuries, according to a press release. The authorities reportedly learned that the cub and sow had survived and were hiding in a mountain cave, where Spanish officials were trying to aid the bears with fruit and water.

Male bears commonly kill cubs so they can then breed the female, who cannot breed while she has cubs with her. Just last month a male grizzly killed a sub-adult cub that was with a sow bruin in Yellowstone National Park.