New guns and cartridges are great, but sometimes it’s more fun to hunt with an old reliable 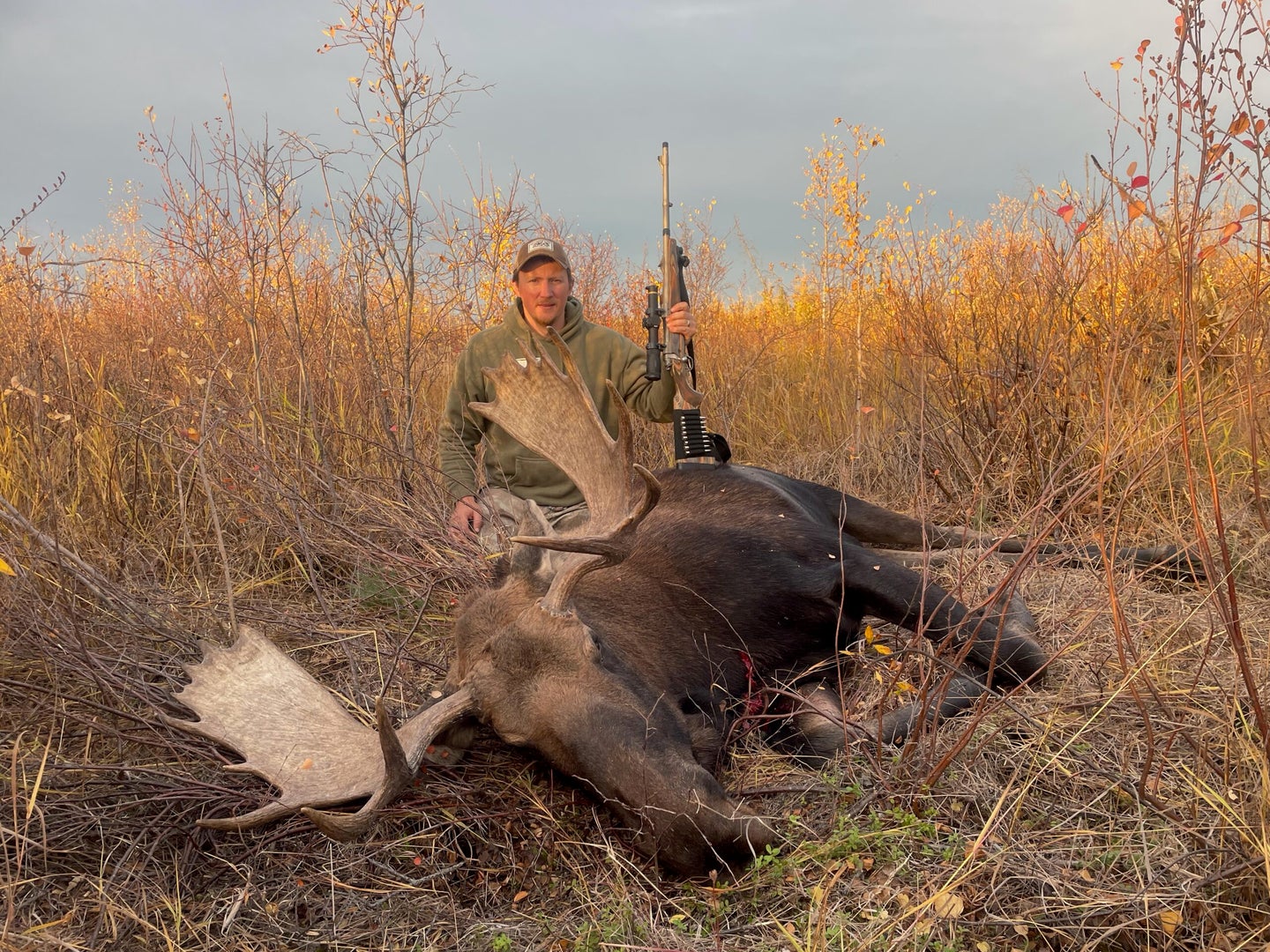 The author with his unremarkable, and even unattractive, old moose gun. Tyler Freel
SHARE

September is a special time in interior Alaska. It’s a short-lived transition between summer and winter, often with clear skies, frosty mornings, yellow falling leaves, and grunting bull moose. For a hunter, it’s paradise. And for many Alaskan hunters, moose camp is the most anticipated, most painstakingly prepared for, and most sentimentally valued hunting trip of the year. It’s a time to have fun, collect hundreds of pounds of meat, and hopefully not do too much overthinking.

But leading up to this year’s hunt, I was doing just that. For the life of me, I couldn’t decide what rifle I wanted to take moose hunting. This shouldn’t be a complicated issue, as anything from a .243 Win to a .375 H&H will work just fine. I thoroughly enjoy using and testing new rifles and cartridges, but sometimes it’s nice to take a break from all that.

So, finally, I went with a rifle that doesn’t stand out in any way, except that it works — all the time. It’s a battered Ruger M77 Guide Gun in .338 Win. Mag. that I acquired through some bartering. It’s just the type of rifle that sheds off any sort of sentimental attachment that someone would be foolish enough to set on it. Even brand new, this rifle probably wasn’t particularly good-looking, and after a few years of hard use, it’s nothing short of a beater. Plus, it’s heavy. Being well-traveled now, the barrel and stock are covered in dings and scratches and when I got it, I noticed the Ruger was missing its rear iron express sight.

But still, my initial interest in this gun was threefold. First, the M77’s controlled-feed actions are popular here in Alaska. They are ultra-reliable, and once you get them broken in, the action is very smooth (I’m very attached to an M77 Alaskan in .375 Ruger that I’d already had).

I liked the idea of using this .338 as a boat and bear-baiting rifle, considering the barrel is significantly shorter than that of my .375, making it much more maneuverable in the brush. Although it’s no .375, it will still bring plenty of performance with 250-grain round-nose bullets loaded to the max.

Lastly, the rifle was already beat up pretty good, and getting the “new” off a rifle is the scariest part. I have a soft spot for used, beat-up, and underappreciated guns.

After acquiring the rifle, I immediately replaced the muzzle brake with a thread protector and ordered a new rear sight. I had been using the rifle with iron sights, and had no idea how well it would really shoot beyond self-defense range, so I set it up with a Leupold VX6HD 1-6X scope, which is a great balance of magnification and field of view for a rifle like that.

On the bench, this gun really surprised me. It has a good trigger and it averaged just under 1 MOA groups with Federal Premium 200-grain Trophy Bonded Tip factory loads.  It was hard to believe, considering the green and brown laminated stock foreend was slightly off-kilter and clearly not floated. After a few consistent groups, I decided I wasn’t dreaming, it really was shooting that well.

I decided that this rifle was going to moose camp with me. (Though, I’ll admit that I made one more trip to the range after that to check again).

It’s easy for me to get sucked into focusing on preparation, and the specifics when it comes to hunting rifles, and being prepared is vitally important. However, it’s also important to remember that the rifle is just a single factor in your success and having something you know will get the job done is more important than the flashiest new cartridge or chasing the next new model of rifle. There are lots of moose hunters who pull the same moose rifle out of the closet year after year and keep their freezers packed.

In our moose camp, we rely heavily on calling. We aren’t in an area where we have high vantage points to glass from. It’s so swampy that we wouldn’t be able to get anywhere even if we wanted to. So, each morning and evening we spend hours calling from the same spot, and we set up a tripod stand to gain some visibility over the tall brush.

After a few days of calling, and at the end of a few cow calls, I noticed a rump sticking out from the alders in a stand of dead timber about 300 yards away. Soon enough, I saw it was a bull. Not wanting to spook him, I cow-called softly. I don’t think he was able to hear me in the high winds, but he continued to gradually feed in our direction, angling toward an opening that might offer a 200-yard shot. He gradually kept coming and was just stepping into the open when I set up to shoot. As I got behind the rifle, I noticed the wind blowing the top of a small tamarack tree back and forth, right in front of my muzzle. I couldn’t shoot. The bull continued my way and got into some tall brush, with only the tips of his antlers visible. After about half an hour, the wind laid down and I cow-called again. He immediately locked onto us, and steadily made his way closer, grunting and tearing up brush and small trees with his antlers. He finally presented a clear shot at just 25 yards, and that old .338 did what it was supposed to do.

It was fun to give an old rifle a chance. I love new guns, cartridges, and other gear, but there is something to be said for hunting with an unremarkable, and even unattractive, old rifle that you know will get the job done.