Watch: Everglades Tourist Films 15-Foot Python. Critics Say She Should Have Run It Over

Some think the invasive snake should have been turned into roadkill. Wildlife officials recommend shooting a python in the head and scrambling its brains with a screwdriver 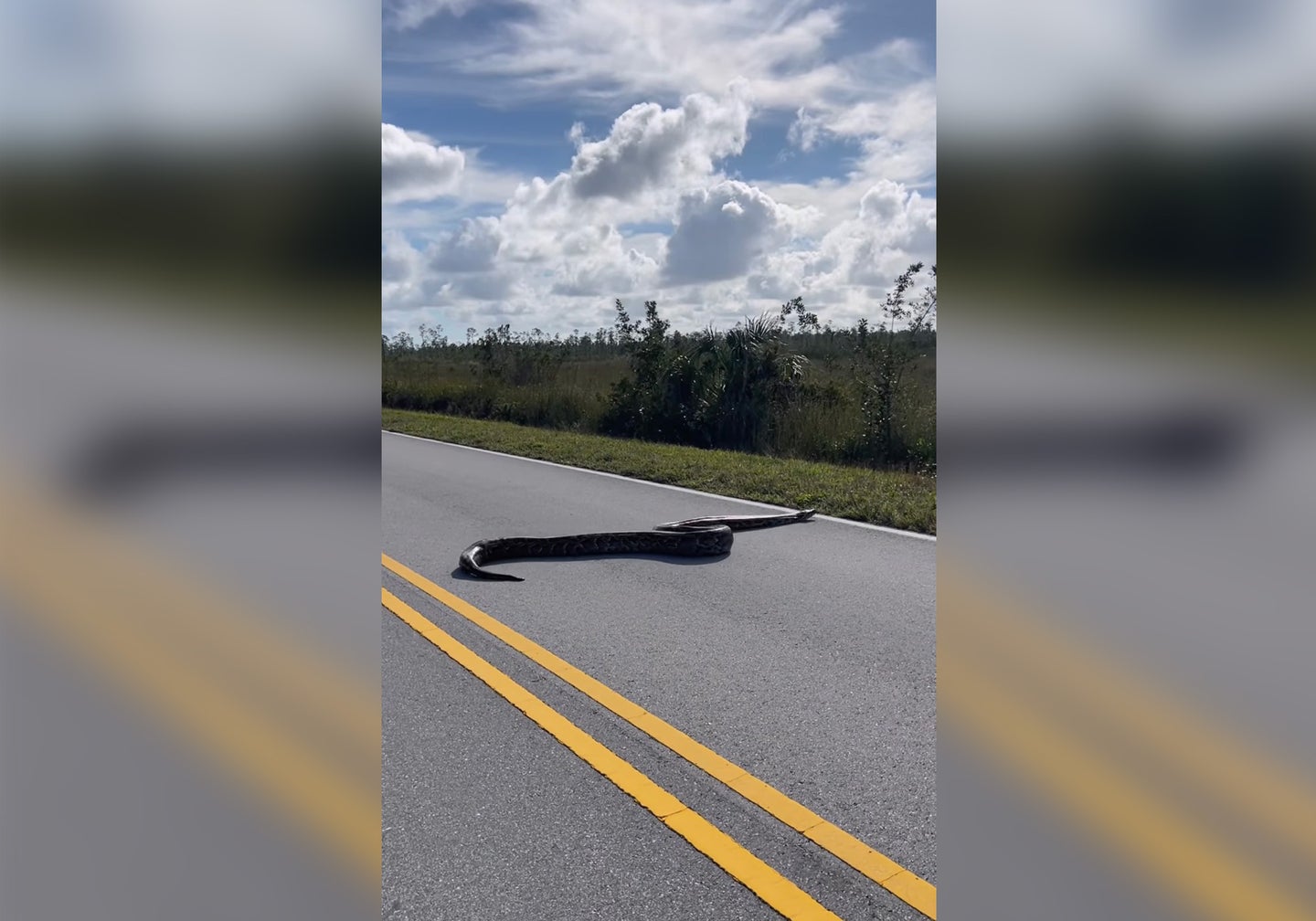 The Florida Fish and Wildlife Conservation Commission encourages the public to kill Burmese pythons. So naturally, when Kymberly Strempack Clark posted this video of a 15-foot-long chunker of a python sliding into the grass on the side of a two-lane road, she was met with accusatory comments about letting it get away.

Clark writes that she and her friend pinned the location and reported the snake to officials. But some viewers were annoyed that she didn’t run the python over with her vehicle. One commenter wrote:

Did you kill it?…If you love the Everglades, you should. (assuming you have a tool to do so. I guess a car would work)

But in Florida, even nonnative reptiles are protected by anti-cruelty laws. Intentionally running it over might have left the python wounded and could have prompted an animal cruelty charge. FWC also only encourages citizens to kill pythons on private property and FWC-commissioned land. Generally, killing animals in a national park is complicated, if not outright illegal.

The FWC website has recommendations for how to humanely kill invasive Burmese pythons. The first step is to use a weapon that “result[s] in the animal losing consciousness immediately.” The second step is to “destroy the animal’s brain by ‘pithing’ which prevents the animal from regaining consciousness.” In more specific terms, the FWC recommends shooting or stunning the python in the head and then stirring its brain to a pulp with a screwdriver. (If you think I’m kidding, just look at these diagrams.)

The state agency touts these zombie warfare tactics for a reason: snakes can be difficult to kill. Decapitation is discouraged because their heads can stay alive for quite some time after being severed from their bodies. For poisonous snakes, that can mean a deadly bite when you aren’t expecting one. For nonpoisonous ones, it can mean an unnecessary suffering that most conservation-minded folks try to avoid. Burmese pythons are nonvenomous constrictors. These monster invasive snakes can grow up to 18 feet long, and prey on deer, alligators, pets, and even the occasional human.

The FWC started the Florida Python Challenge in 2013 as a way to rally support and awareness around the issues invasive reptiles pose to the Everglades ecosystem. Since then, hundreds of hunters kill as many pythons as they can find over a 10-day period in August. The Challenge requires that hunters use the state’s recommended humane tactics and hunters must pass an online training before being eligible to participate.

In other words, it’s a much bigger deal to kill a 15-foot-long snake than some of the commenters on Clark’s post make it out to be. Instead of attempting to run it over, she reported the siting and GPS location to authorities.

“No, Siri,” she joked in the caption. “We don’t want to proceed to the route!”