Idaho Fish and Game has an experimental new strategy in its continued effort to eradicate brook trout from certain watersheds: Flood these areas with males 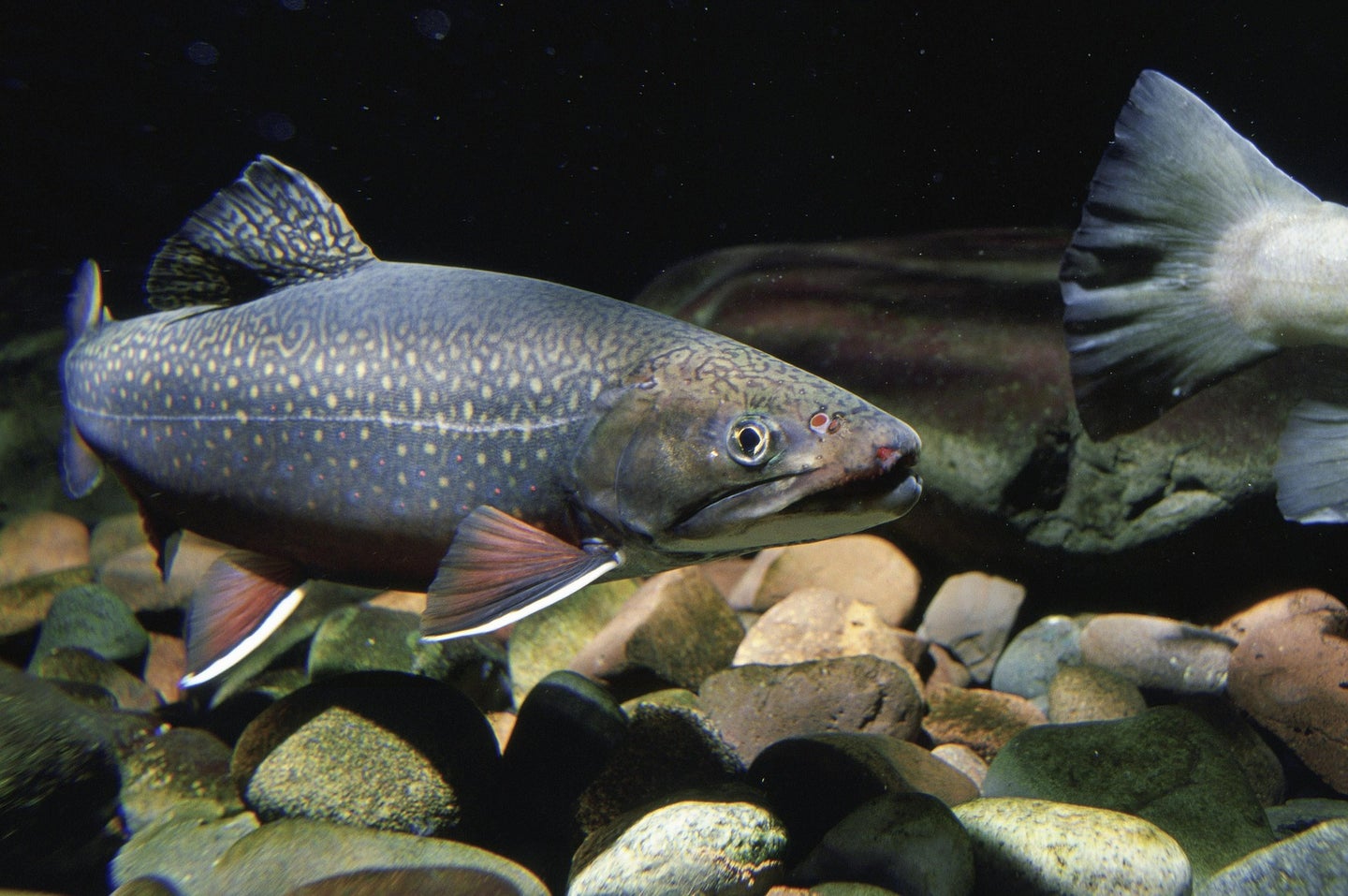 Idaho and other states in the Rocky Mountain West are working to eradicate eastern brook trout from watersheds where they are competing with native trout populations. USFWS
SHARE

Brook trout are easy to love. They are prolific, aggressive, and usually eager to grab a dry fly or well-presented lure. Brookies thrive in the lakes, beaver ponds, and creeks of the high country, where they are one of the easier and more plentiful species for anglers to target.

Ironically, it is precisely because of these characteristics that some fisheries managers and native-fish advocates in the Rocky Mountain West have come to hate the little buggers—and are now looking for ways to eradicate them from certain watersheds. With this goal in mind, the Idaho Department of Fish and Game has come up with an experimental and novel strategy involving the creation of a new type of brook trout. Biologists are calling it the “super-male” brook trout.

Gregg Anderson is one of the hatchery managers for Idaho Fish and Game, and he explained the brook trout dilemma in an interview with the Idaho Mountain Express. “They are an introduced, prolific species from the Eastern Seaboard that did better than they should have,” Anderson said. “And what happens is that they’ll overpopulate and cut out what is supposed to be in our streams: cutthroat trout, bull trout and rainbow trout.”

There are a couple of simple explanations for this overpopulation. First, brook trout reproduce at a much younger age than native trout species. IDFG has found that brookies can reach sexual maturity within their first year, while research conducted on westslope cutthroat trout shows that the majority of female cutthroats don’t become sexually mature until five years of age, with some reaching maturity by age three. Add in the fact that brook trout spawn in the fall and not the spring—when most other trout in the West spawn—and it’s easy to see why these invaders from the East Coast have such a leg up on the western natives.

In Idaho, as well as in other states like Wyoming and Montana, where brook trout have either harmed native cutthroat populations or replaced them entirely, fish and game agencies have tried electroshocking rivers and removing brookies by hand. They’ve introduced predator species like tiger musky and tiger trout to chip away at the populations, and in some specific areas they’ve made it illegal to release brook trout alive. They’ve even poisoned whole stretches of rivers and creeks with rotenone, but none of these efforts have been enough to put a significant dent in local brook trout populations.

So, in 2013, IDFG started asking the questions: Why not use the brook trout’s fecundity and high reproductive rates to their own disadvantage? Why not use the hatchery program to somehow create a sterile population of brook trout?

The wildlife agency’s answer to these questions is the “super male”, which is a male brook trout that has two Y chromosomes instead of the usual XY arrangement. The effect of this change is that fish with two Y chromosomes can still fertilize eggs from females, but this fertilization will only produce male offspring.

IDFG began rearing the super-males in 2015 at its Hayspur Hatchery in Central Idaho. The somewhat complicated process of rearing these YY males involves exposing young brook trout to low doses of estradiol, a female sex hormone. This hormone does not affect the females but it causes the males to sexually develop as females, giving them the ability to lay eggs. Hatchery technicians then use standard XY males to fertilize the male eggs, and roughly one in four of these eggs produces a YY super-male.

Theoretically, the introduction of super-male brookies will lead to fewer and fewer female offspring over generations, which will eventually cause a brook trout population to die off completely.

Read Next: The Future of Trout Fishing in the West Could Be in Hot Water

The state is now producing thousands of super-males at the Hayspur Hatchery, and IDFG has already begun testing this theory by releasing super-male fingerlings via helicopter into some of the high mountain lakes located in the central part of the state.

It will be some time before researchers see the effects of the super-male experiment on brook trout populations in Idaho, but one thing is for sure: fisheries managers from other states in the Rocky Mountain West will be watching as this experiment unfolds. In fact, some of these states, including New Mexico and Wyoming, are already working on their own super-male populations.