Possible Year in Jail, $10,000 Fine for Tourist Who Got Too Close to a Grizzly In Yellowstone 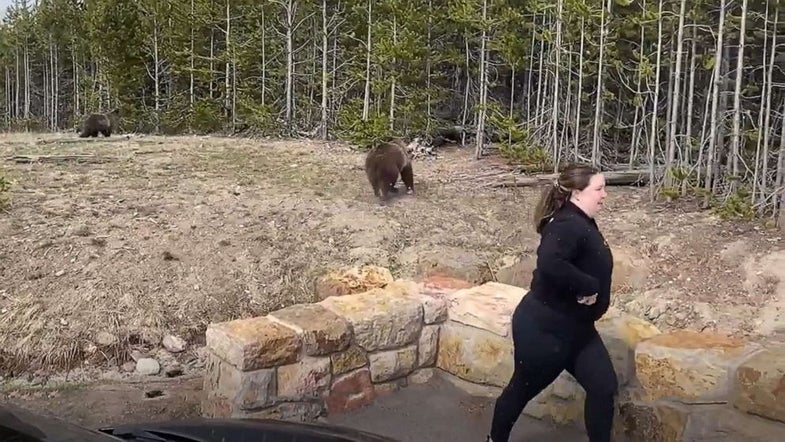 Officials have charged an Illinois woman for approaching a grizzly sow this spring in Yellowstone National Park. Yellowstone NPS
SHARE

For months officials have been trying to identify the person who was shooting video too close to a very wild and not too happy sow grizzly bear with cubs in Yellowstone National Park. The woman shown in the video, recorded in May at the Roaring Mountain area of Yellowstone, was in violation of park and federal regulations that require visitors to stay at least 100 yards from bears and wolves.

Social media sleuths helped federal authorities track down 25-year old Samantha Dehring of Carol Stream, Illinois, who is shown in the video approaching the bears. Investigators secured a warrant to search Dehring’s social media posts after receiving a tip from someone who had seen a video posted with her name tagged, reports CBS-TV 2 in Chicago.

Witnesses told investigators that Dehring was with a group of tourists who spotted the bears. When they saw the bears coming closer, other tourists returned to their vehicles and warned Dehring to get back. But she did not until after the mother grizzly charged to within 15 feet of Dehring, as you can clearly see in the video.

Federal attorney Bob Murray announced August 2 that Dehring is charged with one count of willfully remaining, approaching, and photographing wildlife within 100 yards and one count of feeding, touching, teasing, frightening, or intentionally disturbing wildlife.

Dehring is expected to appear in front of Judge Mark Carman in Mammoth Hot Springs, Wyoming, on August 26, for her arraignment. She faces up to one year in jail and a $10,000 fine if convicted.

Darcie Addington, who recorded the scene from her car window, said that other visitors tried to warn Dehring not to get too close to the bear, but she didn’t listen. “It was terrifying,” Addington told USA Today in May, after Yellowstone officials posted her video in May. Many commenters ridiculed officials for attempting to find the then-unknown offender, with one writing:

“How can we all sleep at night, knowing there is such a dangerous criminal out there in the community? 😱 I hope she gets locked up ASAP and spends no less than 25 years behind bars. Or, ideally, life without parole or even death sentence! I’m sure this is a death sentence-type crime! Absolutely heinous! Well done, park officials. Go get her 😂”

But Dehring’s violation was deadly serious. Not only do Yellowstone NPS officials deal with a constant string of wildlife viewing violations—which harass animals and endanger parkgoers often for the sake of a photo—but Dehring could have easily been attacked and killed by the sow. There have already been several fatal grizzly encounters in 2021, including the death of a Montana camper in Montana, and the mauling of a Yellowstone guide in mid-April, who died from his injuries. The guide, Carl Mock, was attacked by a grizzly roughly 35 miles from where Dehring approached the sow on May 10.

The grizzly population continues to climb in the lower 48, where they remain protected. While hunters, anglers, and other outdoor recreationists can do everything right and still be attacked by a bear, part of the equation for reducing human-grizzly encounters means not knowingly approaching dangerous wildlife and inviting opportunities for conflict.