Researchers Are Scaring Invasive Mosquitofish to Death with This Robotic Bass 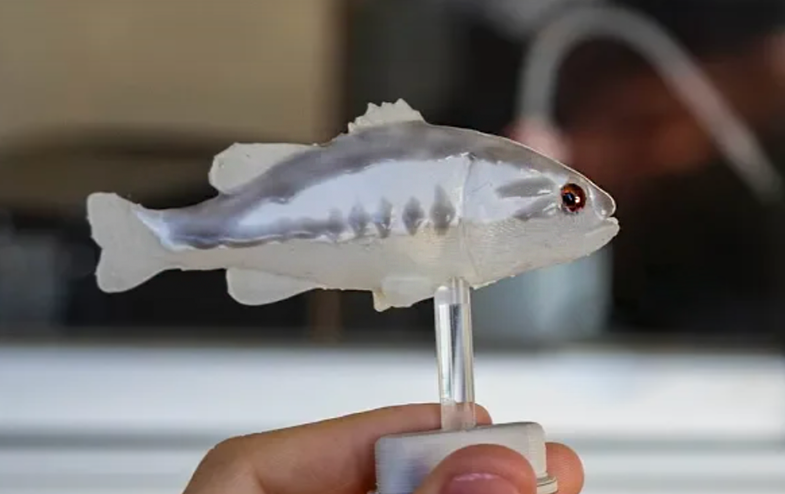 Polverino's robotic bass, which he and his research team used to reduced mosquitofish numbers. Giovanni Polverino, via YouTube
SHARE

As part of a scientific study that was published in iScience on Dec. 16, an international team of researchers placed robotic largemouth bass in the same tanks as tadpoles and eastern mosquitofish (Gambusia holbrooki). The study confirmed that gambusia were so scared of the robotic predatory fish that they actually lost weight, changed their habits, and reproduced less. By effectively scaring the pants off (on?) these mosquitofish, the study’s lead author, Giovanni Polverino, and his team proved that robotic fish could be an effective tool in the global effort to combat invasive fish species.

Eastern mosquitofish, which are native to the eastern and southern United States, have been introduced all over the world to control mosquito populations. Ironically, their introduction in places like Australia has had the unintended consequence of making mosquito problems worse. That’s because instead of primarily eating mosquito larvae, they tend to eat the tadpoles and other native amphibians that evolved to eat mosquito larvae in the first place.

The study that was conducted at the University of Western Australia is one in a series of studies that looks at the relationship between eastern mosquitofish and robotic largemouth bass. A 2019 study placed mosquitofish and robotic bass in the same tank and found that by simply exposing them to the robots, the mosquitofish had lower energy reserves, and became less effective at reproducing. Physiologically speaking, the male fish became thinner and more streamlined, and they had lower sperm counts, while the females tended to produce lighter eggs.

Polverino’s more recent study added tadpoles to the mix and found that, in addition to changing their physiology and reproducing less, the mosquitofish spent more time worrying about the robots and less time chasing tadpoles. Since the tadpoles did not evolve to recognize largemouth bass as predators, they were mostly unaffected by the robot. If anything, researchers found that the tadpoles became less afraid and more willing to explore their surroundings when the robot was in the tank.

“Mosquitofish is one of the 100 world’s worst invasive species, and current methods to eradicate it are too expensive and time-consuming to effectively contrast its spread,” Polverino said in an interview with Science Daily. “Instead of killing them one by one, we’re presenting an approach that can inform better strategies to control this global pest. We made their worst nightmare become real: a robot that scares the mosquitofish but not the other animals around it.”

Invasive fish harm fresh- and saltwater environments worldwide by threatening biodiversity and throwing a proverbial wrench into the intricate inner workings of aquatic ecosystems. They tend to out-compete native predators, and they wreak havoc on other species that evolved without contact with the invasive species, and are therefore unequipped to defend themselves against foreign intruders.