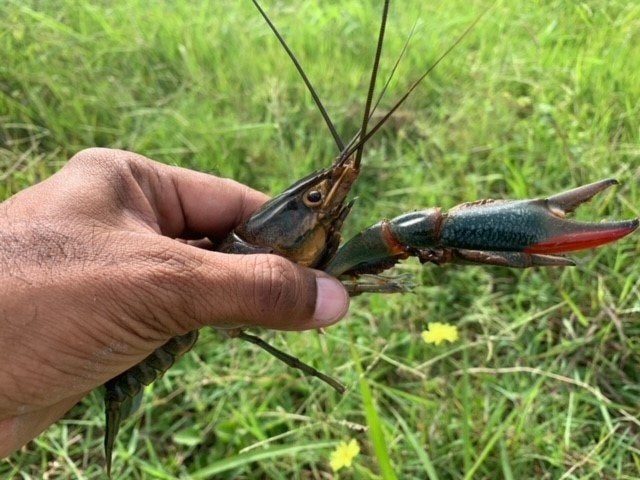 This smaller redclaw was one of the specimens found in south Texas last month. TPWD / Facebook
SHARE

Researchers from the University of Texas Rio Grande Valley and the Texas Department of Parks and Wildlife recently came across a giant species of crayfish in a pond near Brownsville. The redclaw crayfish, which comes from Australia, has been in the United States for some time, but these are some of the first to be documented in the wild in Texas.

Between January and March of this year, a team of researchers at UT collected three of the crayfish from an apartment complex pond that connects to a local resaca near Brownsville, which is located in South Texas near the Mexican border. (A resaca is a small, isolated lake that results from seasonal flooding.) Then, in July, aquatic biologists from TPWD collected three more specimens from the same location.

“We don’t know when these invasive crayfish were first introduced or how far they have spread, but we do know they can have a negative effect on local species and biodiversity,” TPWD aquatic biologist Dr. Archis Grub said in a press release.

These weren’t the first Australian redclaws found in Texas either. In 2013, Seth Patterson found and recorded a female crayfish with a few babies on iNaturalist and reported the encounter to TPWD. Patterson’s crayfish was also found in the Rio Grande Valley.

Australian redclaw crayfish are much larger than their North American counterparts. The species can grow as large as two pounds, which is roughly the weight of an average-sized Maine lobster. This size difference is one reason the species concerns local biologists.

“Because of their larger size, they can have a bigger ecological imprint on habitat modification,” Grubh explains. “One good thing is these are not burrowers, so we’re not too concerned they are going to start digging through the stream banks in a larger way, but they are definitely known to alter the vegetation.”

In addition to their massive size, Australian redclaw crayfish are prolific reproducers, and healthy females will drop thousands of eggs per year. At this rate, the species can alter habitat, outcompete native crayfish species, and directly feed on native fish communities. Once the crayfish establish their population, they are nearly impossible to eradicate, according to the Australian New South Wales Government.

The species is also known to carry crayfish plague, a disease that has decimated crayfish populations in Europe and elsewhere. The disease is a concern for aquatic managers, but the risks are currently unknown.

Read Next: Rats Are One of Alaska’s Worst Invasive Species. Centuries Later, Wildlife Managers Are Working to Eradicate Them

Redclaws are farmed in aquaculture operations worldwide, including Belize, Indonesia, and China. There have been attempts in the United States to raise the species in captivity, but most have failed. Today, Florida is one of the only states that allows the species to be farmed.

Texas officials consider the non-native crayfish an exotic species and it is illegal to raise them for purchase, sale, or release in the state. For this reason, TPWD officials believe the species was most likely released through the aquatics trade.

“Release of aquarium life is unfortunately a key means by which invasive species such as these crayfish are introduced,” TPWD senior scientist Monica McGarrity explained in the press release. She added that well-meaning aquarium owners sometimes think they’re doing the right thing by releasing their pets into the wild, but doing this usually results in harm to the ecosystem.

“Right now, it’s just making the public aware and getting some information so you can put pins on the map to see how far the spread is,” says Grubh. “Spreading the word about this invasive species and reporting sightings to TPWD can help us better understand where it is distributed so we can potentially take steps to help prevent its spread.”