Wisconsin Waters Are Warming. Its Walleye Fishing and Stocking Programs Are in Trouble

Walleye are the state's most popular gamefish, but warming waters put walleye management practices into question 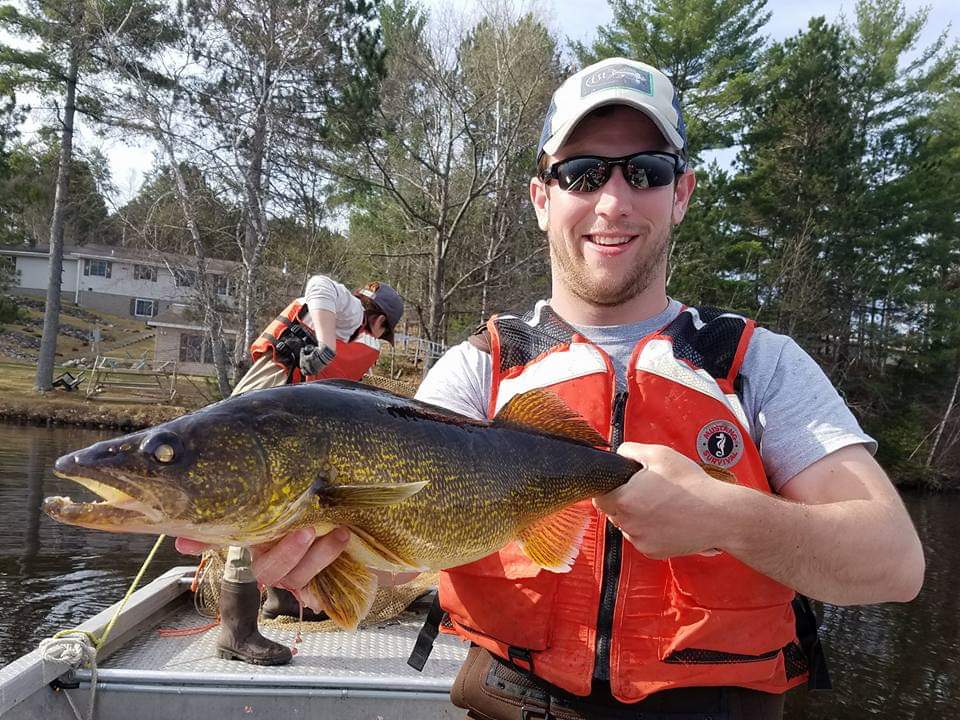 Alex Latzka, one of the co-authors of the study, holds up a healthy Wisconsin walleye. WDNR
SHARE

Wisconsin’s lakes are getting warmer, and a recent study looks at how rising water temperatures are taking a toll on walleye populations across the state. The study also suggests that as these lakes continue to change, fisheries managers will have to adapt their management strategies and direct their focus toward other fish species that are better suited to warming Midwestern waters.

“Moving forward, climate change is probably going to outstrip our ability to resist it in its entirety,” Zach Feiner, a research scientist with the Wisconsin Department of Natural Resources and the lead author of the study, told Wisconsin Public Radio.

Feiner clarified during a recent interview with Outdoor Life that he doesn’t think walleye will disappear from Wisconsin anytime soon—but that there are certain lakes where the time-tested approach of stocking and regulating harvest won’t be enough to sustain walleye. These lakes will turn into warm-water fisheries that are more conducive to species like bass and bluegill. In these places, he says, it’s important to rethink management strategies by accepting and directing ecosystem changes rather than resisting them.

“There are only three things we as managers can do,” explains Alex Latzka, another DNR fisheries biologist and co-author of the study. “We can resist that change, we can accept it, or we can understand that it’s happening and direct it into some new direction toward a new outcome.”

A Tale of Two Strategies

The study, which was published in the Journal of Fisheries Management and Ecology in March, points out that over the past half century, the DNR has primarily focused on resisting ecosystem changes and supporting walleye populations through the use of hatcheries and harvest regulations.

Since 1972, roughly 2.3 billion walleye have been stocked in Wisconsin’s lakes and rivers. In 2013, the state launched the Wisconsin Walleye Initiative, and last year the Initiative funded the stocking of 835,005 walleye across 151 bodies of water. While it hasn’t been cheap to churn out this many fish, the program has received plenty of public support from the state’s angling community.

But the stocking of walleye in Wisconsin’s lakes was never meant to be a long-term solution, according to Max Wolter, who co-manages the DNR’s statewide walleye management team. And he says that in certain lakes, the ecosystem isn’t healthy (or cold) enough to support a naturally reproducing walleye population.

“Natural reproduction is a really important part of delivering our best walleye fisheries,” Wolter says. “In most cases, stocking is seen as a temporary action to get [fisheries] back to natural production.”

Fisheries managers in Wisconsin have also worked to support walleye fisheries by implementing more harvest regulations over the years. This regulatory model, which is used widely throughout the country, relies on bag limits and size restrictions to protect vulnerable fish populations.

Looking back, harvest regulations were fairly liberal across the state until 2015, when managers implemented a statewide minimum length of 15 inches and a daily bag limit of five fish. Harvest restrictions have only increased since then. Many lakes are now subject to stricter size limitations and smaller bag limits, and there have already been a number of changes made going into the 2022 walleye season, which opened in May.

New Fish on the Block

Regardless of whether or not all fishermen are willing to accept it, research has shown that Wisconsin’s lakes are changing along with the climate. By looking at historical trends, climate scientists with the Wisconsin Initiative on Climate Change Impacts have already reached the consensus that the Badger State will get noticeably warmer and wetter in the years to come.

“In particular, [our] studies find that Wisconsin is likely to become a much warmer state over the next few decades, with average temperatures more like those currently experienced in states hundreds of miles to our south,” according to the WICCI’s projections.

Looking toward the future, some researchers are projecting a near-complete loss of the state’s cold-water lakes by the end of the century. A report that was released by the Great Lakes Indian Fish and Wildlife Commission in 2018 projects that only 35 percent of Wisconsin’s lakes that support naturally reproducing walleye today will still be able to do so by 2050.

That doesn’t mean these lakes will be devoid of fish in the future. But it does mean that as walleye continue to lose ground, other species will come in to take their place.

Holly Embke, a USGS research biologist and another co-author of the study, says that walleye already face serious competition from warm-water species like largemouth bass and bluegill, which have thrived in many of Wisconsin’s traditional walleye waters as they’ve warmed.

Embke just wrapped up a three-year project that helped remove 300,000 panfish and black bass species from McDermott Lake, where walleye have been on the decline for years. But she says these removals didn’t make much of a difference for McDermott’s walleye population.

“We didn’t find any changes in walleye,” Embke explains. “Even with the intensive reduction of competition and predation of warm water fishes, it isn’t necessarily enough to [reduce] the pressure on walleye.”

Embke does point to some silver linings, though. She says that yellow perch—another cold-water species that is popular among Wisconsin anglers—responded well to the experiment and could be more resilient to future environmental changes in these lakes.

Embke and the other co-authors of the study explain that one of the biggest problems with changing the state’s management strategies around walleye—and directing its efforts toward bass, sunfish, and other more climate-resilient species—is rooted in public perception. In other words, many Wisconsin anglers just want to keep catching walleye.

Past WDNR surveys have shown that walleye are the most popular species in the state, with roughly 63 percent of respondents naming walleye as their favorite fish to catch. Wisconsin anglers spend a combined 1.8 million hours every year targeting them, and these efforts contribute well over a billion dollars annually to the state’s economy, according to the American Sportfishing Association.

So, while the recent study doesn’t assume that Wisconsin anglers will change their preferences overnight, it does point out that a change is coming either way. Which means that Wisconsin’s fisheries managers—and its anglers—will have to learn to change with the times.

“The fishing we did as kids in Wisconsin is not the kind of fishing my daughter is going to be doing when she’s my age,” says Feiner. “There’s going to be fish, they’re just going to be different fish.”