By way of introduction: I am a long-time inhabitant of a gateway town to the GSENM (Grand Staircase Escalante National... 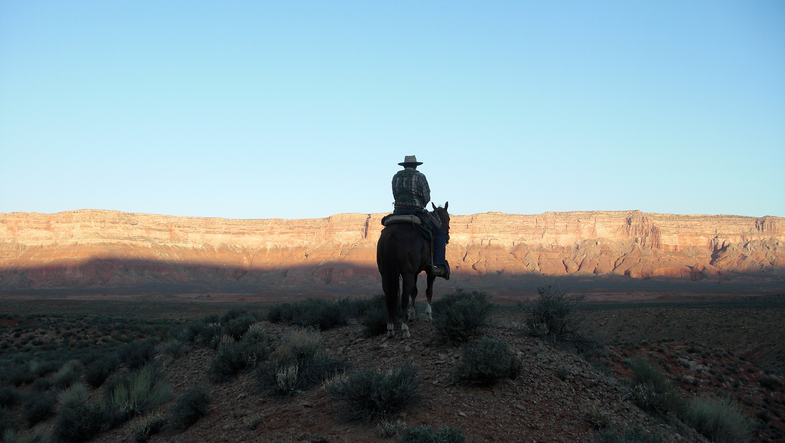 A Utah cowboy deep in the GSENM, on what used to be his ranch.. Aram von Benedikt
SHARE

By way of introduction: I am a long-time inhabitant of a gateway town to the GSENM (Grand Staircase Escalante National Monument). I’ve lived here since my childhood, and have seen the changes that come with the creation of a large-scale monument. I’ll leave you to decide whether they are positive or not. My personal feelings on the subject of monument reduction are mixed. I do, however, have some first-hand observations that may be of interest.

Boulder (my hometown) in pre-monument days was a laid-back agricultural town. It was also key winter habitat for deer and elk.

Immediately after the monument designation, land prices went up tenfold. Farms and ranches were sold, subdivisions created, winter habitat lost. Boulder is still a small town if you go by the Census Bureau population estimate (225), but that number doesn’t count the flood of seasonal workers, vacation-home owners, and tourists who pass through the area each year. The additional human pressure has left its mark on the land. Land prices continued to rise and are now 25 to 30 times what they were before—farming and ranching is unaffordable. Many of the people who lived off the land were forced out, because their livelihoods were no longer feasible.

Now, I know the same thing is happening all over the West, but the accelerated rate here was unprecedented.

The new population of Boulder is predominantly wealthy, retired, or both, liberal, and opposed to shooting and hunting. Most of the ponds, fields, and creeks that used to be open to fishing and hunting with just a courteous phone call are now closed to hunting and fishing.

Pre-GSENM, this part of Utah was quiet, game-rich, and, in a way, pristine. Sure, you might find a cow pie on a trail, or see a cowboy’s horse tracks reaching off into the distance. But after the monument was designated, people came in droves to see the fantastic new “discovery.” Now, two decades later, they are still coming in droves. Sure, some people make lots of money off of the tourists (is that a good reason to have a monument?), and maybe there are other hidden linings that I simply can’t see. But what I can see is the human feces crowned with a TP flower along the trails where cow pies used to reside. I see the lasting marks and erosion caused by off-road vehicle abuse. I see the wonderful earth-oriented people I grew up with sadly pulling up roots and wandering away, searching for a simpler, kinder place to try to re-root, someplace they can live with and care for the land without someone regulating them out of business. Sure, the GSENM protected the land from some things. But has the monument actually kept and preserved this land as the close-to-pristine place it was two decades ago? From my up-close, live-on-the-edge perspective, the answer is a resounding Hell No. On the contrary, it has done irreparable damage.

Now, I know that change and “progress” are inevitable, and in many cases good. But in my opinion, the GSENM was worse than a failure—it was catastrophic for the wildlife, the land itself, and the good folks who lived on or near it. In the absence of a hunter/gatherer culture and society, the real environmentalists are the agricultural folks who still depend upon the land for life. Not the city-dwelling, agenda-driven people who live disconnected, supermarket-fed lives, ignorant of the land and the real meaning of sustainable beauty and health for that land.

Now, the big ranches, farms, and fields where wildlife used to winter are cut into 5-acre ranch-etts. The elk no longer come into town at all. And when you see a deer you’ll have a hard time getting a photo of it without a building in the background. The desert and canyons that I grew up hunting deer and following cattle through are full of trash, tire tracks, and the people that leave them.

In closing, let me assure you that I have every desire to protect and conserve our wild land and wild places. Hunting and fishing and mountain living are my greatest passions. I believe in doing everything we can to preserve the limited resources we have left. But I do wonder if the GSENM has accomplished any of that.

Aram von Benedikt is a BM (before monument) resident of wild places in Southern Utah.