Video: Colorado Angler Catches a Trout While Stuck in I-70 Traffic

If you’re stuck on a bridge in bumper-to-bumper traffic, might as well wet a line 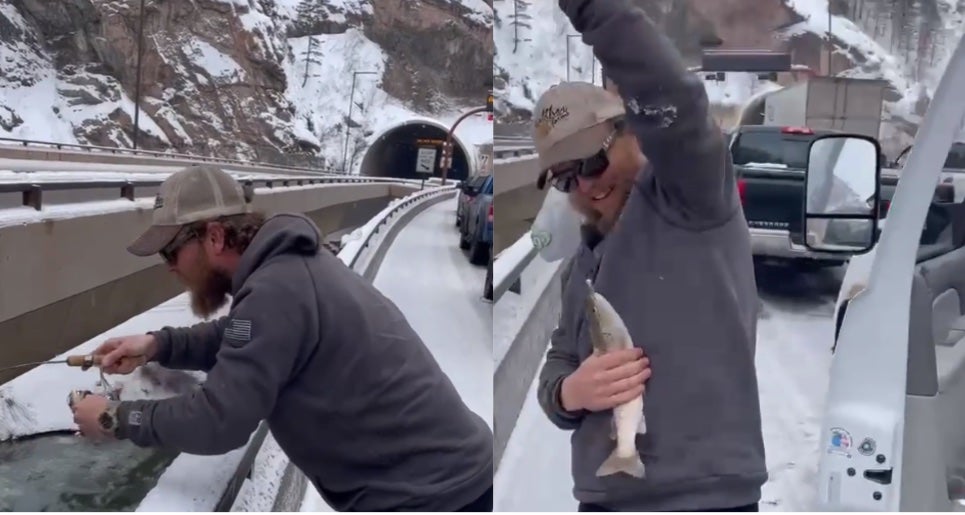 Just casting a line and killing time while stuck in traffic on I-70. Dylan Hayes, via Instagram
SHARE

Dylan Hayes was one of many Coloradans stuck in a traffic jam on I-70 in Glenwood Canyon last weekend. While he was parked in bumper-to-bumper traffic on a bridge, the Colorado River beckoned from below. Hayes clearly had some time to kill, and he happened to be a fishing rod stashed in the back of his truck. So he stepped out of the vehicle and wet a line.

The dedicated angler then became a commuting legend when he hooked a healthy rainbow trout and landed it in front of everyone.

Hayes later shared a video of his catch to Instagram and he quickly received over a dozen compliments and attaboys. One commenter called it “one of the most productive traffic jams in history.” The video was then shared to I-70 Things, a feed that features “all the wild things that happen on I-70”, where it has garnered more than 20,000 views.

Looking at the roughly 40 seconds of video footage, Hayes hands the ultra-light rod off to one of his buddies after he sets the hook. Then he proceeds to handline the trout all the way to the bridge from the river’s surface. Dressed in sweats and Crocs, the fisherman is able to grab hold of the fish—which looks like a respectable, 12-inch rainbow—before traffic starts moving again. The video ends abruptly as the other passengers get back inside the vehicle and Hayes hurries back to the driver’s seat, fish in hand.