Learn How to Read Your Sonar for Better Spring Walleye Fishing

Photo by Doug Stamm Today’s space-age sonar and GPS units can seemingly make us better fishermen overnight. However, as with... 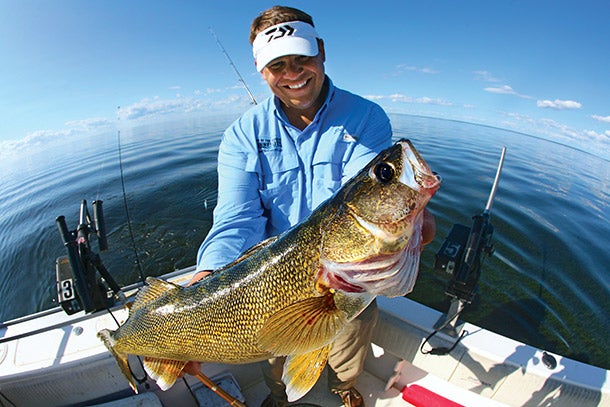 Today’s space-age sonar and GPS units can seemingly make us better fishermen overnight. However, as with cell phone technology, many of us harness only a fraction of the potential. Then there’s Bruce Samson, aka Doc Sonar. Capable of interpreting sonar imaging in plain terms that any angler can understand, Samson has made a living teaching anglers how to better understand their electronics.

Below are four actual screen shots depicting spring walleye fishing situations–and how to interpret them.

Finding Fish at High Speed The left side of the screen is with the boat at roughly 20 mph; the right side shows the exact same scene at 2.5 mph. The faster you travel, the more the marks become vertical because you are moving through them more quickly. At faster speeds, you will still see a small ball of color indicating the strongest signal return. This is a keeper-size walleye.|

Bottom Huggers After the spawn, walleyes like to hug the bottom and are almost impossible to see much of the time, even with the best electronics. A slight bottom separation provides a clue but doesn’t necessarily mean that’s exactly where the fish are–they may be suspended anywhere from 1 to 3 feet higher in the water column. Run lures accordingly.|

Weed Whacking On many reservoirs and inland lakes, walleyes like to hide in the first weed growth of the season. The image on the left shows these weeds on a drop-off. On the right, the side-view image of the same drop-off allows you to see weeds more clearly, and you also can make out what is likely to be one or two fish suspended between the left two clumps.|

Fish High and Low This screen shot shows a half dozen walleyes on a mud flat near a break. However, take particular notice of the baitfish balls in the upper 12 feet of the water column. It’s a good bet that there are walleyes feeding on those baitfish in that upper 10 feet of water. So if you mark one fish, it means there are likely many more present.|