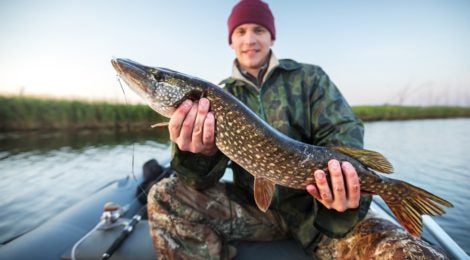 For the first time in 50 years it's safe to eat fish from the Illinois river. Illinois Department of Natural Resources
SHARE

For the first time in nearly half a century the Illinois Department of Public Health doesn’t have a “do not eat” warning for folks consuming fish from the 270-mile long Illinois River, reports the Chicago Tribune.

Department of Health advisories were made following a fish sample study collected from the Illinois River at various places. It issues annual advisories for about 50 rivers and streams, plus lakes and portions of Lake Michigan.

The Illinois River is an important Midwest waterway stretching diagonally across the state from just southwest of Chicago to where it enters the Mississippi River north of St. Louis.

The previous advisory for the Illinois River suggested people should not ingest fish from it during a given length of time, such as once per week or once per month. Now the most limiting advisory for Illinois River fish consumption is along two regions of the river for those eating channel catfish, which the department has now relaxed, advising one meal per month.

All of this suggests a positive direction for diminishing pollution in the Illinois River, which for nearly half a century had fish deemed unfit for human consumption. According to the Tribune, state officials say concentrations of polychlorinated biphenyls, or PCBs, have declined, leading to the advisory’s removal for the first time since the 1970s.

PCB toxic contaminants were used as insulating fluids for electrical equipment, and were banned in 1979 because they harm the environment and are detrimental to humans. Prior to the ban, PCBs entered the air, water, and soil during manufacture and use. Wastes containing PCBs often were placed in dumps and landfills.

PCBs in water contaminate fish, as they build up in fatty fish tissue that can be consumed by humans with toxic consequences. Traces of PCBs have been found in people and animals world wide – even in the remote Arctic.

But according to NOAA, PCBs break down over time and diminish in the environment, which likely is what is helping the Illinois River.

PCBs degrade in the environment by sunlight or by microorganisms, says NOAA. Sunlight plays an important role breaking down of PCBs when they are in the air, shallow water, or surface soils. Microorganisms, such as bacteria, algae, or fungi, biodegrade PCBs when found in soil or sediments.