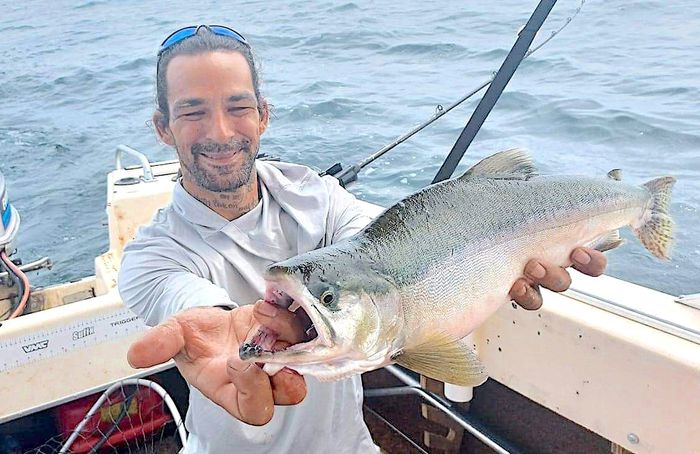 Fishing guide Anthon Hyvarinen caught the new Ohio pink salmon record fish August 17, 2021, while trolling for walleyes off the town of Geneva in Lake Erie, according to Cleveland.com. Hyvarinen’s 22-inch pink salmon weighed 4.3 pounds and has been accepted as an Ohio species record by the state Division of Wildlife.

In the world of salmon, pinks or humpbacks, are much smaller and generally not as prized as coho or Chinook salmon which average several times larger and fight considerably harder. For that reason pink salmon have not been stocked in the Great Lakes in such abundance as other Pacific Coast salmon species.

But a record is a record, and Hyvarinen’s fish takes the top spot for pinks in Ohio.

Hyvarinen is a fishing guide from Madison, Ohio and was trolling a purple spoon in 74-feet of Lake Erie water, eight miles off Geneva, located northeast of Cleveland.

Pink salmon are commonly called “humpies” because of a pronounced hump on the fish behind the head. The hump is especially pronounced in male salmon during their autumn spawning runs up tributary streams. Pink salmon are noted for their large runs, when thousands of fish mass in natal rivers for spawning, especially in Alaska.

But pink salmon never have been found in large abundance in the Great Lakes. Stocked in the 1950s in Lake Superior, pinks spread to other lakes in the region. They were first discovered in Lake Erie in 1979, and today are considered very rare throughout the Great Lakes.