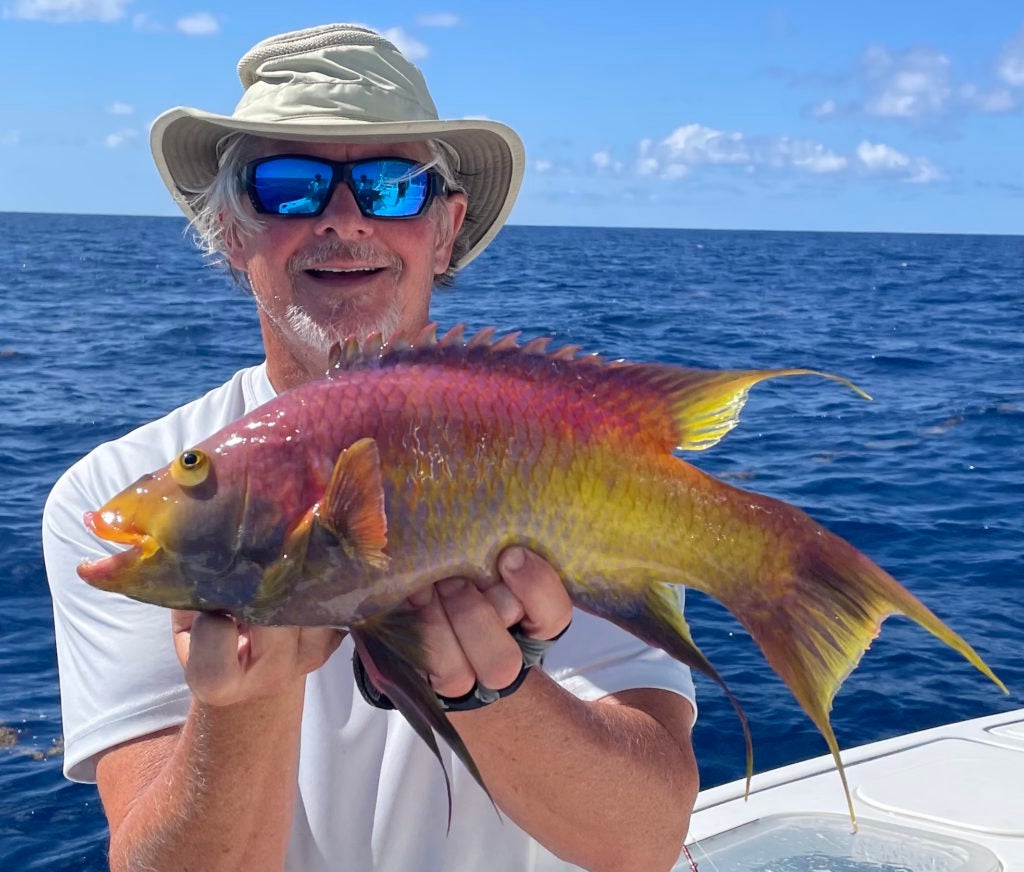 The anglers had been catching grouper, when Timson noticed a piece of crab in the boat.

“The crab was laying on the deck and looked good ,” the dentist from Southport told newsbreak.com. “One of the other fish had regurgitated [the crab]. So I put it on the hook and dropped it back down. That apparently was the right thing to do.

“We were fishing in 200 to 250 feet of water offshore of Frying Pan Tower when the fish hit. There really wasn’t anything special about the fight, except that once near the surface, it got a burst of energy and pulled some drag. We had been catching larger fish and were a little surprised at this. But some offshore bottom fish save a burst for when near the boat and we didn’t think anything of it.”

Timson’s fish was odd looking, with plenty of pink and yellow colors over a mostly green body. None of the anglers knew what it was, though their best guess was a parrotfish. Timson checked an app on his cell phone to identify his fish, and learned it was a Spanish hogfish, and a big one. The current record for the species was only 1-pound, 8-ounces, and a boat scale they used showed Timson’s fish weighed over 2 pounds.

Back on shore they took the fish to Island Tackle & Hardware in Carolina Beach where on IGFA certified scales officially weighed it at 2-pounds, 11-ounces, shattering the old all-tackle record for Spanish hogfish. Timson filled out all paperwork and submitted proper documentation to IGFA, which verified Timson’s  all-tackle world record for his Spanish hogfish on Aug. 31.

Read Next: How to Break a Fishing Record

Spanish hogfish are one of five hogfish species that IGFA recognizes. The Spanish hogfish is classed as a species of wrasse that inhabits rock and coral reefs out to depths of 230 feet. While chiefly an aquarium species, they’re caught throughout the Western Atlantic Ocean from Brazil through the Caribbean, Gulf of Mexico and north to the Carolinas and Bermuda.