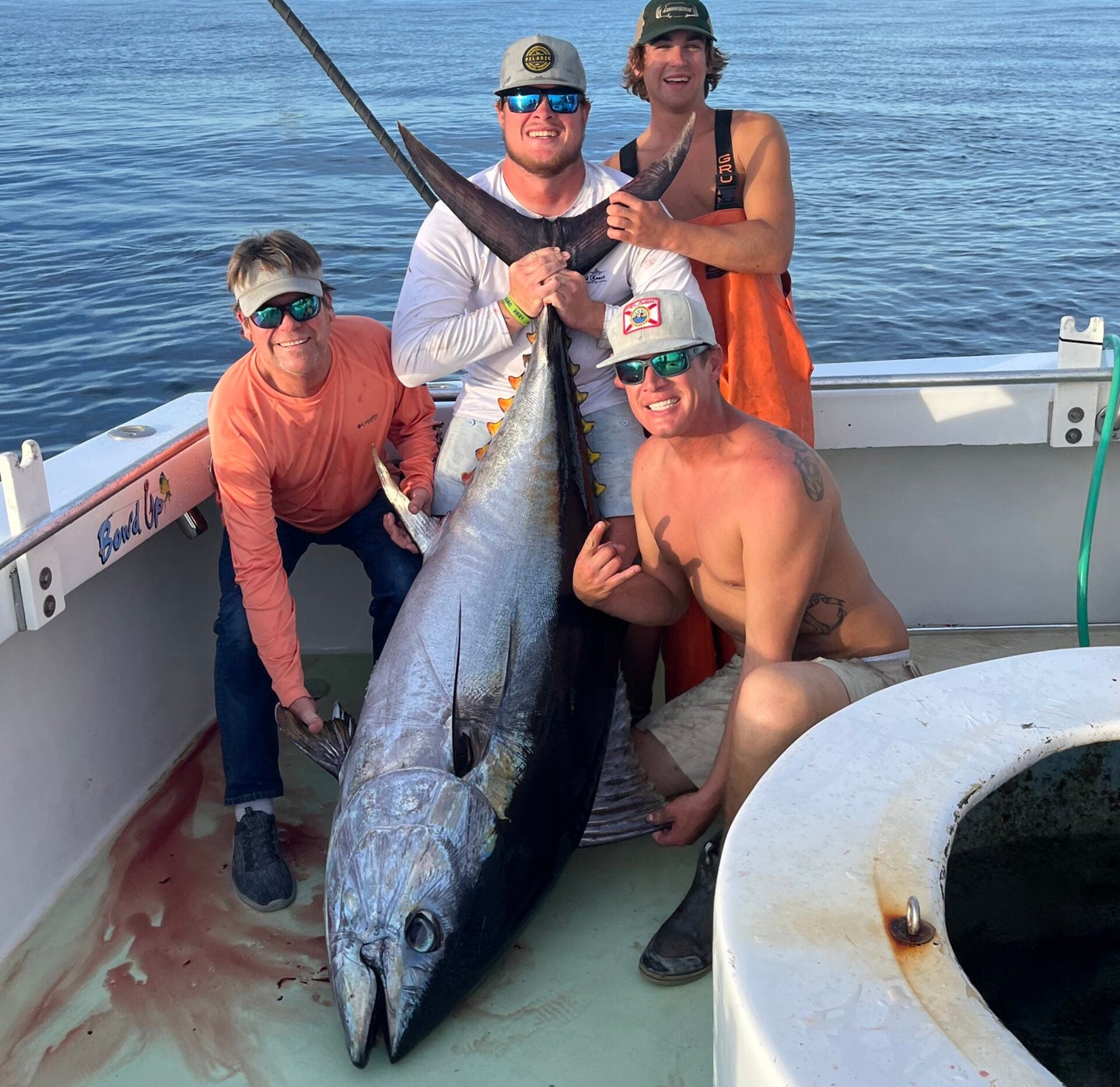 The Bow'd Up crew with a record bigeye tuna. Brady Bowman
SHARE

Anglers and crew aboard the 52-foot Destin-based boat “Bow’d Up” pulled away from the Florida Panhandle port on Nov. 29, excited about a three-day offshore trip for bottomfish and tuna. Little did they know that their heaviest catch of the trip would become a likely Florida record for bigeye tuna.

The group bottomfished on Nov. 30, and began tuna fishing that night.

“We started out chunking for tuna and we caught three yellowfins that night, so we were doing great,” says Bow’d Up Capt. Brady Bowman. “At 9:30 a.m. that next morning [Dec. 1] we caught a very nice 125-pound bigeye tuna near an offshore oil rig, and lost a couple other big fish I thought were yellowfins. My sonar was just lit up with big fish deep, and we stayed on ‘em.” The Bow’d Up crew was fishing 145 miles off the Florida coast, in 7,200-feet of water, with big fish “marking” on sonar down below.

“We were near a drilling ship, and bait was everywhere,” says Bowman. “We caught a small skipjack tuna, rigged it as bait, and dropped it down 200 feet with a downrigger. That’s when the biggest tuna I’ve ever seen walloped it. It turned into the most epic offshore fish fight I’ve experienced in 35 years of doing this.”

Local angler Lloyd Chism was on the rod, and he was in for a grueling, hours-long battle.

“We had a heck of time getting that fish away from the drill ship, which I thought might cut the line,” Bowman says. “The fish dove so deep and was so strong, I thought it was a blue marlin. Four or five times Loyd fought the fish close to the surface, only to have it doggedly pull line off the reel and dive straight for the bottom again and again. I’ve had marlin do that. There was just no stopping this fish.”

Bowman says the heavy tackle outfit Chism used was spooled with 1,200 yards of 80-pound test line, and several times he thought the fish was going to take it all and break off.

“Lloyd was wore out, and I didn’t know how it was going to end,” Bowman says.

“The fish was so big that for a minute I thought it might have been a bluefin tuna, which shouldn’t be in the Gulf at this time of year, but you never know,” says Bowman. “Finally, we saw it was a massive bigeye, and my crew got three gaffs in it and hauled it into the boat.”

The fish hit the deck, and immediately started thrashing its tail so loudly and quickly that the anglers couldn’t believe it had that much energy still left after battling 80-pound tackle for nearly five hours.

Back in Destin on certified scales at Harbor Walk Marina the tuna weighed 244 pounds, smashing the current Florida bigeye tuna record of 194.8-pounds caught by Anthony Kelly in March 2020 out of Juno Beach.

Proper paperwork has been filled out and currently is being submitted to Florida officials for the catch to be certified as the state’s record for bigeye tuna.

While Chism’s fish is massive, it’s well short of the IGFA all-tackle world record Atlantic bigeye tuna, a 392-pound, 6-ounce fish caught off the Spanish island of Gran Canaria, located near the northwest coast of Africa in 1996 by Dieter Vogel.

The Pacific bigeye tuna is another IGFA classed species, which generally run larger and many line class records for them have come from California. The 435-pound IGFA record was caught off Peru in 1957.

“That was one bad fish,” Bowman said about Chism’s bigeye tuna. “I tried lifting just its head for a photograph and my back still hurts.”