A Florida Spear Fisherman Set the State Hogfish Record with a 21.7-Pound Giant

James Michaelin cleaned and gutted the hogfish before weighing it, and it was still a state record 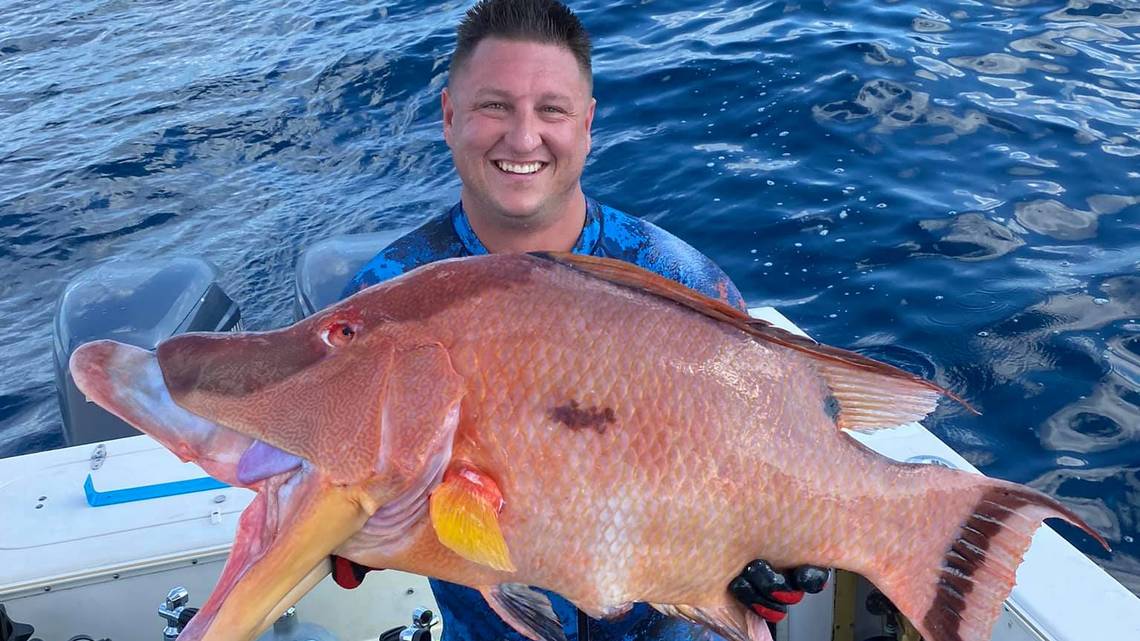 James Michaelin's hogfish weighed more than 20 pounds. Hogfish are also known as the "Captain's Fish" since charter boat captains rarely give them up. They are one of the best tasting fish that swim.
SHARE

Veteran Florida diver James Michaelin was spear fishing for prized hogfish on Sept. 28, 2021 in 120 feet of water, 100 miles off Florida’s Gulf Coast. He hadn’t seen much that day, and was about to give up when he saw the bright colors of a hogfish.

“Getting close to the end of the second dive I said there’s no way I’m coming up without something to shoot [with his speargun]. I had 1,000 PSI left and started swimming away from the big [reef] structure to some smaller stuff. Right when I started to call it, I saw a big hog[fish] come to the left of me,” Michaelin told the Bradenton Herald.

The giant hogfish was curious and swam right up to the tip of Michaelin’s speargun. That’s when he took the easiest shot of his life, and shot the fish through its gills.

“I was really excited when I saw it. It was a big male, I thought about 18 pounds,” he said.

Michaelin placed the dead hogfish on a stringer and swam toward the surface where his dive partners Wil McCraney, Dave Butts, and Fred Grunden helped him aboard the boat and admired the size of the hogfish. The other divers also had shot nice hogfish, but none the size of Michaelin’s.

They continued spear fishing into the night, filling their coolers with grouper, snapper, and other species before heading home.

During the run back to port Michaelin kept thinking about the big hogfish he had shot, and what it might weigh. Wednesday morning at the marina dock they put the heavy hogfish on the scale.

“The hogfish was so big on our scale we thought the scale might have been off,” Michaelin said. “So we wanted to get an official weight on a certified scale and took it to Don’s Dock on John’s Pass [inlet to the Gulf of Mexico], and it was 21.7 pounds. The Florida record was 19.8 pounds; it was much bigger. We got all the documentation and are submitting for the new [Florida] record.”

Read Next: Bizarre Spanish Hogfish Catch Off the Coast of North Carolina Is a World Record

Michaelin’s fish weighed considerably more than 21.7 pounds when he shot it, but he had gutted the fish, and put it on ice so he could continue to spear fish.

Florida marine records allow for speargun shot non-gamefish species, such as hogfish, which are rarely caught on hook and line.

The IGFA all-tackle record hogfish is 21-pounds, 15-ounces. Michaelin’s hogfish likely would have bettered that world-record fish if he hadn’t gutted and cleaned it, but it would not have received a world-record distinction because it was not caught on hook and line.