Despite nasty weather and a slow morning, this father-daughter team toughed it out to boat the blue catfish of a lifetime 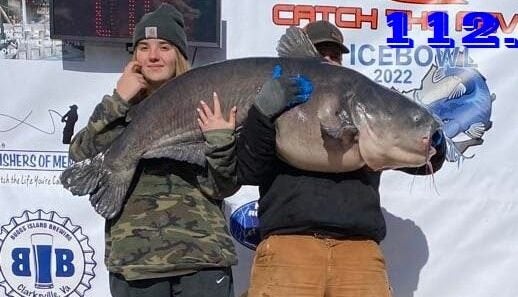 Bill Sutton and his 13-year-old daughter, Georgia, were fishing Saturday’s Icebowl Catfish Tournament on Kerr Lake, which straddles the North Carolina-Virginia state line, despite the weather. The windchill was in the teens, and only the toughest catfish anglers were on the water at dawn. But Sutton’s Starcraft 190 Fishmaster boat is rigged special for catfishing, and he’d installed an enclosure set-up in the boat that was heated with a small propane unit to keep them warm and cozy.

“It was cold and snowing, and Georgia kept telling me we should go in because we weren’t going to catch anything anyway,” says the 54-year-old angler from Pittsboro. “I was just getting over COVID from two weeks earlier, and I wasn’t as strong as usual. But I told her I don’t quit at anything, and we were going to catch a 100-pound catfish that day.”

Sutton has fished the 50,000-acre reservoir for more than 30 years and knows the lake well. He began the day by looking for drop-offs in deep water out of the 30-mph wind. He found a spot behind an island that offered a little shelter from the weather, where his sonar unit marked some large fish at 40 feet.

“We anchored and started fishing, but the anchor pulled free, and I had to reposition the boat again to get situated just right,” says Sutton. “But we finally got anchored, and I set out some cut gizzard-shad baits for blue cats.”

In time, a rod bowed tight showing a strike, and the Suttons caught a 12-pound blue cat.

“It was about noon, and 10 minutes after I re-baited that rod and threw it out, the same rod bowed again, and I knew it was a huge fish,” he says. “I fought the fish and got it near the boat and saw it was a giant. I knew Georgia couldn’t net the fish and lift it, so I handed her the rod, I got the net, and scooped it. But I couldn’t lift it into the boat because it was too heavy for me.”

Georgia grabbed the net to help her dad, and together they hauled up the netted catfish, which was nearly as big as Georgia. Together they rolled it into the boat, then rolled the fish into a specially built 100-gallon metal water trough Bill uses as a catfish live well.

Bill turned to Georgia and said, “we just won the Icebowl,” and they started celebrating as they pulled anchor and ran their boat back to the tournament weigh station. The Icebowl is a team event with only one fish eligible for weighing-in per team, and it drew 126 boats. The Sutton’s 112.54-pound catfish was nearly twice as large as the second-place blue catfish, which weighed 59.23 pounds. According to tournament rules, fish brought to the scales must be handled carefully and released alive into the lake.

The Suttons stood watching as their 112-pound blue cat was released. Bill put his arm around his daughter, saying, “God sent you a message today about never quitting, which is why we won this tournament.”

“She’s really pumped about going catfishing again, which I think winning $1,200 had a lot to do with it for a 13-year old girl,” said Bill, chuckling.

While the Sutton’s 112-pounder is massive, bigger blue cats have been caught from Kerr. During an Icebowl event in 2017, another angler caught a 141-pound blue cat from the lake, which is just two pounds shy of the IGFA world-record. The 143-pound world-record blue catfish was also caught from Kerr Lake in 2011.