The Science of Hearing Loss for Shooters and Hunters, and How to Prevent It

The science behind hearing loss and what to do about it 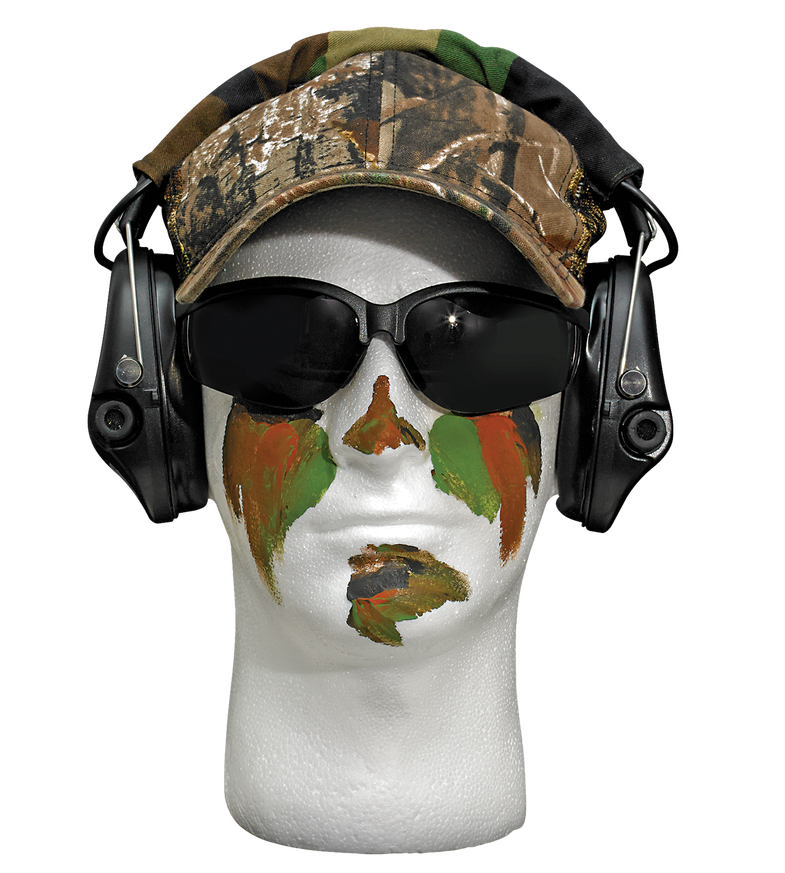 Many of our most beloved outdoor writers of the 20th century shared something in common beyond their mutual love of hunting and shooting and their skill with a pen. Many—including such greats as the late Elmer Keith, Jack O’Connor, and Nash Buckingham—were nearly deaf from the cumulative effects of gunfire that they sustained over a lifetime of shooting.

How Hearing Loss Occurs
Hunters and shooters are at particular risk for noise-induced hearing loss (NIHL). This can occur after a single exposure to gunfire or, as in the case of our esteemed outdoor writers, over a lifetime. NIHL occurs when a person is exposed to sounds above 85 dBA, and the sensitive hair cells in the inner ear, which transduce sound waves into nerve impulses, are either damaged (temporary hearing loss) or killed (permanent hearing loss). These delicate hair cells will not regenerate in humans, as they do in fish and birds.

Factors Affecting Shooters
Hearing loss may not affect both ears equally. Because of acoustic shadowing by the head, those shooting rifles and shotguns typically suffer greater hearing loss in the ear that is nearest to the muzzle. For a right-handed shooter, the left ear is generally exposed to 3 to 7 dBA more noise than the right ear. Other factors that affect the amount of noise a shooter is exposed to include the barrel length of the firearm (shorter barrels are generally louder), cartridge intensity, bullet speed (subsonic vs. supersonic), and the presence of a muzzle brake, which can add up to an additional 11 dBA. Your shooting environment is also an important consideration. Enclosed areas with hard, acoustically reflective surfaces, such as an indoor shooting range with inadequate sound baffling, increases reverberation and sound exposure. Sound is also directional, so those standing beside a rifle, particularly if that rifle has a muzzle brake, receive considerably more noise exposure than the shooter.

The caveat here is that how well any hearing-protection device works depends on proper fit. Earplugs must completely seal the ear canal. Earmuffs must completely encompass the ear. Further, hearing protection devices do not reduce all frequencies of sound to the same degree, so the NRR, while useful, is still just a general guide to the amount of noise attenuation they provide.

Types of Hearing Protection
Passive hearing protection takes the form of either earplugs or conventional earmuffs. These can reduce actual noise by 5 to 13 dBA (see “Actual Levels of Protection,” opposite). For noise that exceeds 105 dBA, the combined use of both earplugs and earmuffs is recommended. However, the degree of noise attenuation is not simply the combined NRR values for each type of hearing protection. For example, earplugs may have an NRR of 29 dBA and earmuffs an NRR of 27 dBA, but the additive effect is only about 34 dBA. This is because bone conduction allows a certain amount of sound to bypass the outer ear and directly stimulate the middle and inner ear. A good approximation of combined attenuation can be determined by simply adding 5 dBA to the higher of the two NRR values (see “The Numbers Behind Noise,” opposite).

A third choice of passive hearing protection is custom earplugs. Molded in silicone or rubber, they conform precisely to the wearer’s ear, thus ensuring a perfect fit. These are generally considered to be more comfortable than conventional earplugs. They are as effective (or more so) as regular earplugs and range widely in price from about the cost of a good set of passive headphones to several hundred dollars.

Active noise reduction (ANR) works through a process called destructive interference, and occurs when an incoming sound wave is met with an inverse sound wave produced by the headphone, thus cancelling out the incoming sound. These noise-cancelling headphones are no better at protecting your ears than passive hearing protection, and have NRR ratings ranging from 15 to 30 dBA. They are also considerably more expensive than passive forms of hearing protection. However, they do offer the advantage of allowing normal conversation by amplifying useful sounds like voices while reducing high-impulse sounds.

So which form of hearing protection is best? Earplugs are simple to use, inexpensive, disposable, will not get in the way of your stock, and are as effective as any other type of protection. However, some shooters find them uncomfortable to wear and difficult to properly fit. Passive earmuffs are more expensive and more bulky, but they are generally more comfortable than earplugs. Nevertheless, combining the two remains the most effective way to reduce exposure to noise.

Impact Sport
These lightweight electronic muffs are a great value, have low-profile cups, and fold down small. ($60; howardleight.com)

Walker’s Pro Low-Profile
These simple muffs are affordable and shaped to work well with shotguns and rifles. ($18; gsmoutdoors.com)

The Numbers Behind the Noise
Understanding decibels
The decibel scale is logarithmic, so perceived loudness of sound increases by a factor of 10 for every 10 dBA increase. For every 3 dBA increase in sound-intensity level, the intensity doubles.

Calculating noise reduction
To determine the actual degree of sound attenuation from hearing protection, take the NRR value, subtract 7, and divide the remainder by 2. So for a set of earplugs that has an NRR of 33 dBA, the actual noise reduction is only 13 dBA. If the ambient sound exposure was 150 dBA, the earplugs would reduce that sound to 137 dBA.

What doubling-up does
To figure out how much sound attenuation you get when doubling up on hearing protection, take the higher of the two NRR ratings and add 5 dBA. Then apply the formula above to that figure. 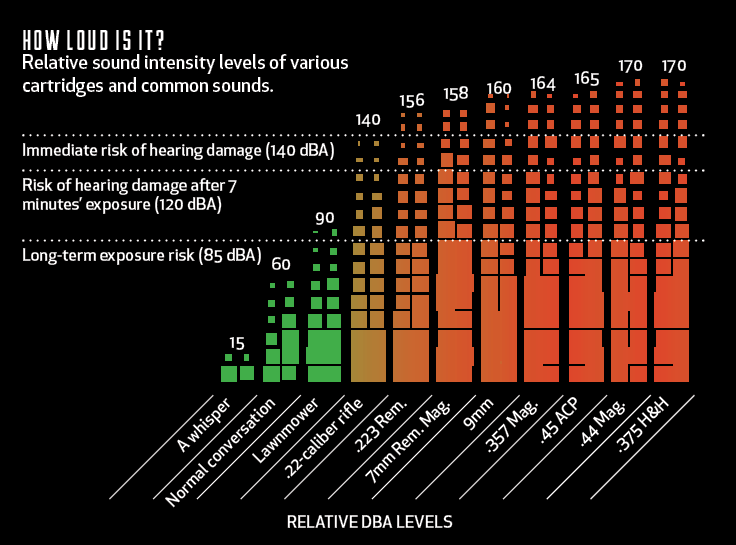 How loud is it?
Relative sound intensity levels of various cartridges and common sounds.

Actual Levels of protection
Typical NRR values and the real-world sound attenuation for various forms of hearing protection when used singly and in combination. 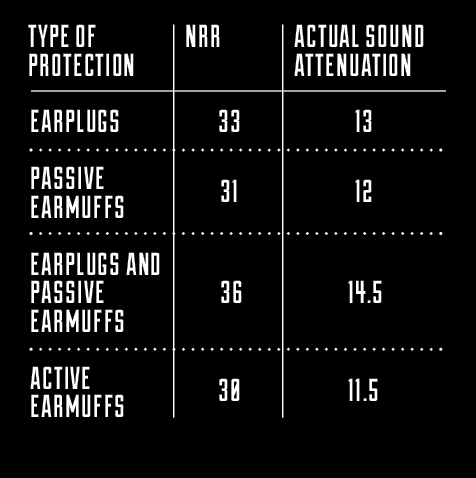