How to Make a Shooting Pillow for Cheap 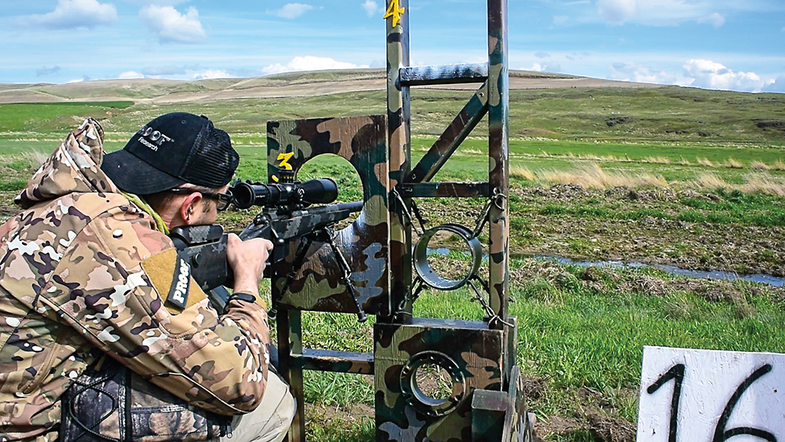 Though ready-made tactical pillows are effective and durable, I’ve struggled with shelling out $100 for one. Recently, while packing for a PRS match, I realized that my procrastination had left me without a good shooting pillow. Panic began to set in. In mere hours, I was most assuredly going to be required to shoot small targets from kneeling positions.

Last-Second Find
As I entered my garage, I thought, There has to be something around here I can use. After some rummaging, I found one of my kids’ soft, insulated lunch boxes. It still had the $7.99 tag on it. It was roughly the size I needed, and was camouflage to boot.
I stuffed it with an extra jacket, granola bars, and jerky, and threw it into my gear pile.

I started the match on Stage 4, which required the shooters to shoot from the tops of four fence posts, all of varying heights. This would be a perfect time to try out my DIY pillow. I said a quiet prayer that the pillow would not fall to pieces in the middle of the stage, scattering jerky at the range officer’s feet.
I strode confidently to the start line with gun and gear. “What is that?” asked the RO. “It’s my tactical lunch box,” I replied matter-of-factly. I could see the wheels in his head turning. After about five fairly uncomfortable seconds, he sighed and shook his head, “Whatever. Let’s go.”

The Tactical Lunch Box (TLB) proved its utility over three days of shooting. At one point, an RO called it “Gucci equipment.” I laughed as I remembered cutting the $7.99 tag off in my garage.

Mods to the System
The TLB has become a staple in my kit, and I’ve discovered ways to improve it. First, I shortened the shoulder strap and installed side-release buckles so that I could strap it to my gun or arm. Next, I sewed corresponding side-release buckles on the corners so that it clips easily on and off my pack.

After shooting a match that only allowed the use of one rear bag (no stacking of rear bags), I decided to fill the TLB with smaller pillows of various sizes, kind of a Russian matryoshka of TLBs. That time the jacket and jerky found a home elsewhere in my pack.
I purchased some bulk Cordura online, raided my daughter’s pink beanbag chair for lightweight fill material, and tracked down the family sewing machine.

Even with rudimentary sewing skills, it is easy to sew two pieces of Cordura into a square, turn it inside out, stuff it with plundered fill, and sew it shut.
Just remember to say that prayer when you step up to the line with your new TLB. If it explodes, you can always buy some replacement jerky with the money you saved.