The Gas Pedal thumb rest comes from the competitive shooting world, but it can make your carry gun easier to shoot too 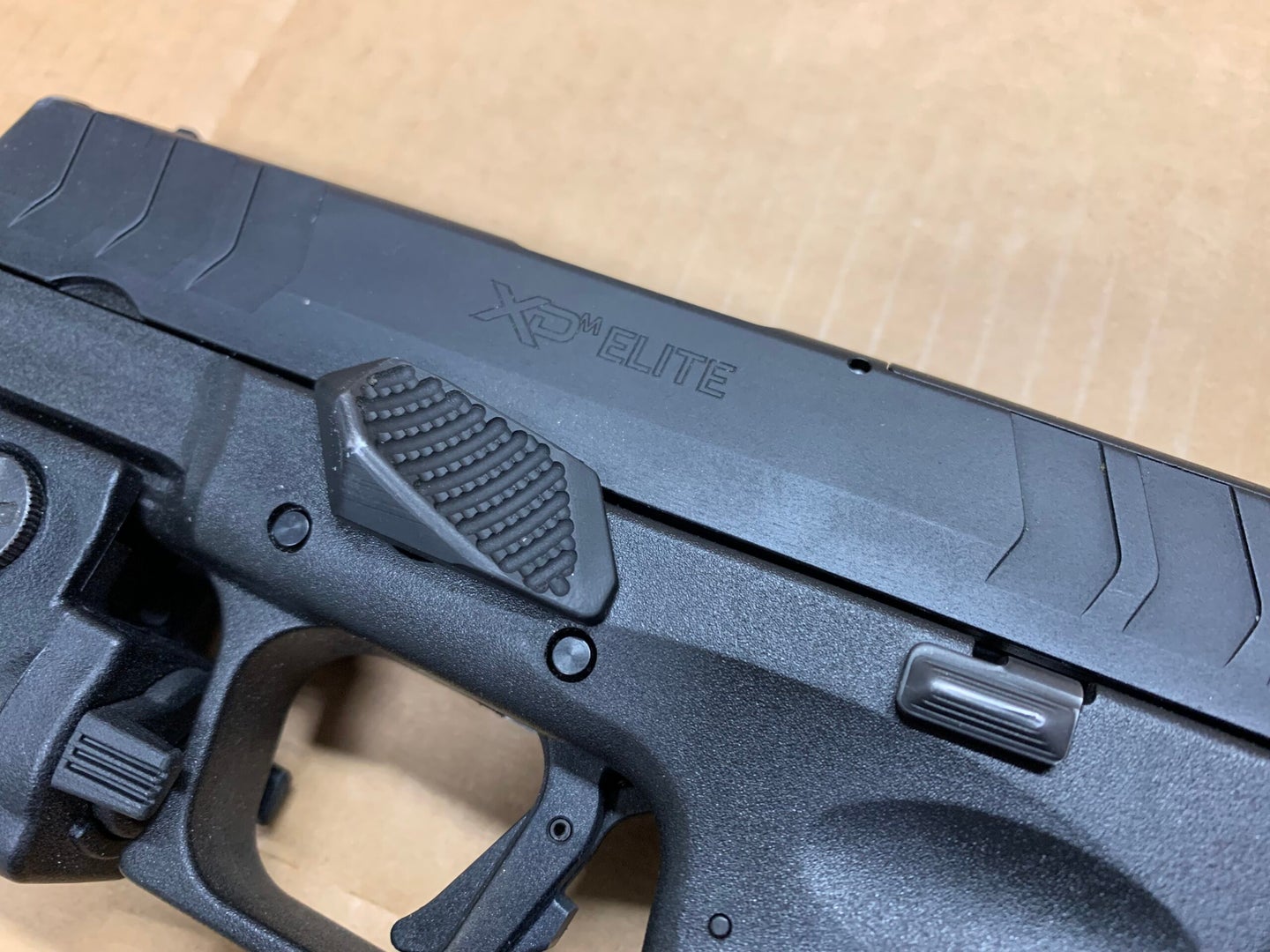 We live in a time of plenty when it comes to customizing and accessorizing our firearms, and the GoGun Gas Pedal is a fine example of that. The performance we can squeeze out of our modern designs would flabbergast pistol shooters of decades past. Contemporary handgun designers approach their task with a completely different mindset about how a pistol is meant to be fired than those in the early 20th century. I don’t think John Browning envisioned IPSC or USPSA shooters blazing through ammunition as quickly as they can stuff magazines in their pistols.

I still love classic pistols, but modern modifications mean more accuracy and performance. Many popular modern designs like lines from Glock and Sig possess dedicated followings of aftermarket parts manufacturers, some constructing whole guns that are “upgraded” from the original designs.

Don’t get me wrong, many of these “upgrades” are as much about cosmetics as they are about performance. But the GoGun Gas Pedal is just the opposite. It’s designed specifically to improve recoil management, which will allow you to get back on target more quickly.

What Is the GoGun Gas Pedal?

In a nutshell, the GoGun Gas Pedal is a thumb rest. More specifically, it’s a landing spot for your support-hand thumb when shooting a pistol. With properly applied pressure, it can give you better control of the gun and seriously reduce muzzle flip—at least that’s the selling point.

The Gas Pedal has its roots in race guns—highly customized and hot-rodded competition pistols designed to be shot with lightning speed. The thumb rest doesn’t do anything on its own, but with what’s called an opposable grip, it allows the shooter to utilize the stronger muscles in their support hand to counteract the forces of recoil. When executed properly, it allows for a more relaxed “strong hand” grip and better trigger control too. Rather than pressing down on the Gas Pedal—which might be intuitive to counteract muzzle flip—you press at 45 degrees forward towards the bore.

I first saw the Gas Pedal—shown to me by a co-worker—mounted on a Sig. He had just arrived in Alaska to work on a project with me, and naturally, I wanted to check out his choice of carry gun.  I hadn’t heard of the Gas Pedal, but having shot some USPSA, the concept made sense to me.

It went on the backburner for a few weeks, but when I got a new Springfield XD-M Compact 10mm, I ordered one immediately.

The GoGun Gas Pedal for race guns is a substantial and obtrusive thumb rest, but the version they make for carry guns—the one I first was turned onto—is much more practical for the everyday shooter. For some handgun models, the Gas Pedal is available as a replacement takedown lever. They install in seconds and will probably fit in the kydex holster you already have—with a little heating.

The GoGun Gas Pedal in Practice

As mentioned, I first ordered the gas pedal to compliment my new compact Springfield 10mm—a gun that was sure to have some substantial recoil. Upon seeing that they made a compatible model, I ordered one and had it installed in short order. It included some instructional paperwork on proper grip, and it only took me a few shots at the range to be sold completely.

The “opposable grip” isn’t what I was used to, and it took some practice, but I was shocked at how well the Gas Pedal allowed me to control the sharp flip of that 10mm. I was giddy. The short 3.8-inch barreled Springfield was now significantly more controllable than my full-size G20-style build. It was also more controllable than the Smith & Wesson M&P 2.0 10mm that I was testing at the time. In fact, with the Gas Pedal and proper grip, it’s the most controllable 10mm pistol I have ever fired. Even though there’s still plenty of recoil, I’ve been able to get the muzzle flip down to the point that the gun hardly even comes off target.

I wasted no time and subsequently ordered another to compare with my Glocks, and another for a Sig P320. The less-fortunate thing about the Gas Pedal is that it’s not exactly universally-fitting. In the form of a replacement take down lever, it’s highly dependent on the pistol’s design, and aside from Sigs and Springfields, you’re stuck with a model that clamps onto your pistol’s accessory rail. This was the case on my Glock G17, and there’s not much that can be done about that. That model Gas Pedal does have a rail on the bottom, so I was still able to attach a light, but it’s positioned a little low. Such is life.

I was equally impressed with the bump in controllability on my 9mm pistols. Both my G17 and P320 run like Singer sewing machines when I’m doing my job properly, and it’s a drag for me to go back to shooting anything without a Gas Pedal. The clamp-on model would certainly require a custom holster, but I was able to fit both my P320 and XDM 10mm in the holsters I already had. I simply had to get a hair dryer to warm up the kydex and do a little form-fitting.

The GoGun Gas Pedal is a Game Changer for 10mm Auto

The GoGun Gas Pedal helped me achieve drastic improvements in recoil control with every gun I tried it on, but the most significant impact to me was with the 10mm pistols. Although it’s more shooter-friendly than high-test revolver cartridges, the 10mm’s recoil is still substantial. In field defensive applications, anything that makes it easier to shoot well is a benefit.

The clamp-on version absolutely makes the Glock G20 easier to shoot, and in the case of the Springfield XD-M compact 10mm, the addition of the take down lever Gas Pedal takes it from being a good option to a fantastic option.

I think that due to the heavier recoil of the 10mm, you might see some increased levels of wear-and-tear—particularly on Glocks which have a polymer contact surface forward of the slide rails that the slide hits upon recoil. Because the frame is being supported more rigidly, more of the energy will be absorbed by the frame rather than your wrists. Using a heavier 24-pound recoil spring would likely reduce that. I’m going to monitor my take down lever Gas Pedal in my Springfield for any signs of wear and replace if necessary. It’s worth it.

What the GoGun Gas Pedal Does Well

The Gas Pedal-when combined with the intended grip drastically improves recoil management and control. It reduces muzzle flip and helps you get back on target more quickly. It’s a game-changer for cartridges like the 10mm Auto.

Currently, the take down lever Gas Pedals are only available for select models of pistols. I think they could successfully be designed for some other pistols, but it’s a factor of demand. Other pistols are limited to the clamp-on version because of their design.

Many accessories on the market lack pith and are predominantly ornamental—that’s not the case here. In a compatible pistol, the GoGun Gas Pedal can help you achieve tangible gains in control and performance. It’s a relatively inexpensive accessory that can have big impact on your shooting. Moving forward, I won’t own a compatible handgun without one.