How to Spool a Spinning Reel

Learn how to properly put line on your reel 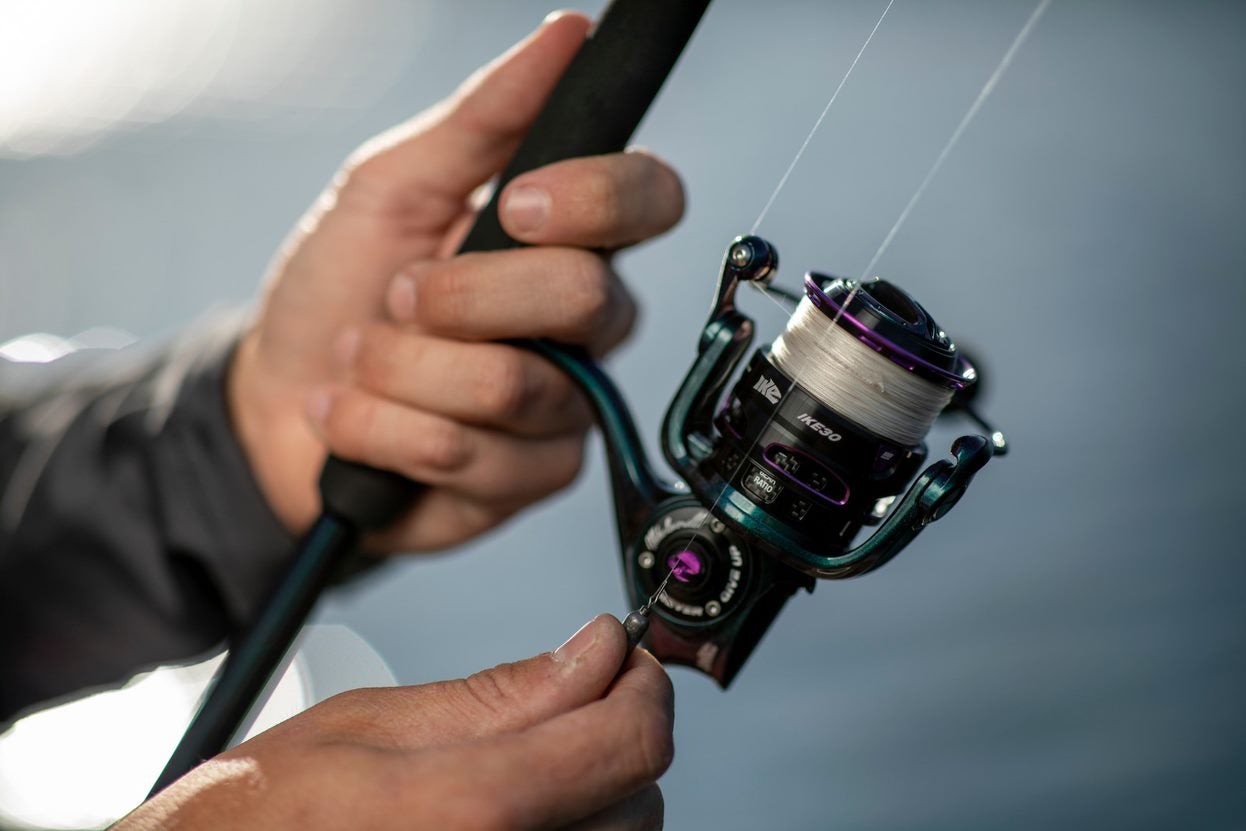 Open-faced spinning reels have been an important part of the North American fishing landscape—in both freshwater and saltwater, for species ranging from minuscule to gigantic—since they came to America after World War Two. They come in a wide range of sizes, at an equally wide range of price points, with corresponding features to best fit the intersection of your quarry and budget. The key to spinning reel bliss is learning how to spool a spinning reel properly to avoid day-ending line twists.

Unlike baitcasting (aka, conventional) reels in which the spool spins to peel off or retrieve line, a spinning reel’s spool stays in a fixed position during the cast and line flows off of it as resistance is eliminated. After the cast the wire, called the bail, is closed by hand or with a turn of the handle. Then an angler can start to pick up the line once again.

The one consistent hobgoblin of spinning reels is line twist. Twisted line, especially if it is monofilament, copolymer, or fluorocarbon, can cause tangles, limit casting distance and reduce your line’s strength. While manufacturers have taken all sorts of preventative measures and developed technological advances to minimize this problem, the number one thing an angler can do to prevent it is to spool their line on properly. Here’s a simple guide on how to spool a spinning reel.

How to Pick the Best Fishing Line for Your Spinning Reel

Most spinning reels have their line capacity printed or stamped somewhere on the reel’s spool. If it’s not there, check the box that it came in, the internal documents or on the company’s website. While spinning reels are often thought of as a light-line alternative to baitcasting gear, especially in freshwater applications, they can also be used to tame sailfish, tarpon and other massive species, so there’s no reason to think that you can’t use heavy line on some of them. Just be sure that it’s suited to the particular reel. You can go outside of the manufacturer’s specifications by a bit, but if you go much heavier the spool will likely be too small, causing the line to come off in loops that are too short, and if you go much lighter the line may work its way under the spool housing, causing all sorts of tangles.

When you check the line capacity, you’ll also want to know what type of line your reel is rated for. Ten pound test monofilament has a much larger diameter than 10 pound test braid, so if your reel is rated for one and you try to spool it up with the other, you may end up with far more or far less line than you expected. Make sure that the spool you’re filling it up from has ample line on it; while there are “filler” spools available, if you’re going to respool your line frequently, as you should, a bulk spool of your preferred brand and size may be a more cost-effective purchase. Once you’ve selected your line, you can move on to spooling a spinning reel with it.

How to Put Line on a Spinning Reel

Your spinning reel may hold 175 yards of 8 pound test fluorocarbon, but for many of us the bottom half or even bottom two-thirds of that capacity will never see the light of day during an actual fishing trip. Accordingly, you can add a bit of backing to your reel to avoid wasting precious line. If you’re using braid, a mono or fluoro backing is always essential because the slickness of the braided line will often prevent it from getting a grip on the spool. Thus your line will slip more than your drag would otherwise allow. If it’s your first time filling the spool with fluorocarbon or mono, just fill it up all of the way. On subsequent restringings, you can just remove a portion of the line. Some anglers use electrical tape in place of backing, but this is just likely to leave a sticky mess.

While there are some inexpensive consumer line stringing apparatuses, and some tackle stores offer more advanced versions, all you really need to string your reel up properly is a spinning rod. How do you tie fishing line to a reel? It’s a simple process. Put your reel on it, thread your line through the guide closest to the reel, open the bail, and then attach it with a few loops around the spool, finished off with a simple overhand knot. Close the bail by hand, make sure that the line is taut, and then put the spool down on the table or the floor with an unobstructed path to the reel. Take note of the way that the spool spins when you retrieve it. You’ll want the line to come off in that same direction—so if you’re seeing it as clockwise, the line should be coming at it clockwise as well. If the proper direction is not immediately obvious to you, then start reeling. If you start getting “pigtails” or “curlicues” at the entering guide, then it means that you are going in the wrong direction.

At that point, there’s no reason to start over again, since that line will be at the bottom of the spool. Just flip over your filler or bulk spool of line and continue the process. As you reel, keep pressure on the line so that it goes on the spool tightly. Also, throughout the process you should assess how it’s lying on the spool itself. If the line is clustered toward the top or bottom, or in any way unevenly, then you’ll want to backtrack or guide the line with your finger to create a more even application.

Keep adding line until you are within about 1/8 of an inch of the spool edge. If you add too much, the line may billow off uncontrollably during the cast, but if you underfill the reel you will substantially limit your casting distance. It’s almost always better to go higher and then take line off as needed. The one exception to this rule is when you want to use braid as your primary line with a fluorocarbon leader. This minimizes line stretch as well as line twist, and allows you to change just a limited section of line each day while your main line stays supple for months. You can use a leader as short as 7 or 8 feet, or up to slightly longer than your longest cast for this process. You’ll want to affix it with a knot that has a high breaking strength and a minimal profile. For tying braid to mono or fluorocarbon the Double Uni and Crazy Alberto Knot are two of the most popular, but the somewhat difficult to tie FG knot may go through guides with the least resistance. For more fishing line knots click here.