Honestly, you should carry both. But if you have to pick one, consider these pros and cons before your next hunt 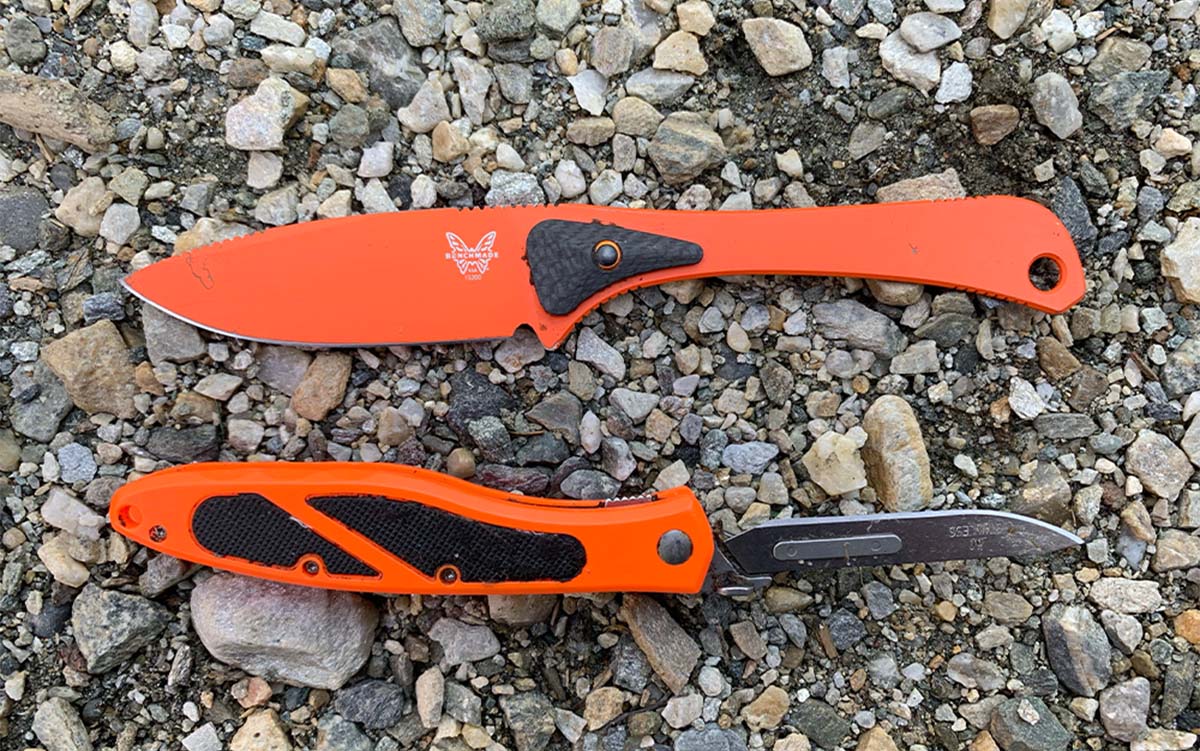 When it comes to choosing a fixed or replaceable blade hunting knife, the truth is that both are great.
SHARE

If you’re in the market for a hunting knife, one of the biggest choices you’ll run into is whether to pick a fixed-blade or replaceable-blade hunting knife. Great choices abound for both styles of hunting knives, and each is well-suited to meet the needs of almost any hunter. But you’re the hunter we’re talking about. And when you’re buying gear, it’s always best to get what’s optimal for you.

Making that choice can be relatively simple, but be warned—no matter the choice you make, some folks will tell you it’s wrong. Like bear defense pistols and the 6.5 Creedmoor, everyone has an opinion about whether fixed-blade or replaceable-blade knives are better. Most of those opinions are high on pretense and low on objectivity. The truth is that both are good, and neither is perfect.

Replaceable-blade hunting knives are exactly what they sound like: once dull, the blades can be swapped quickly and easily. There are many different designs, including folders and fixed-blade-type handles that act as scalpel-blade receivers. There are even scalpel blade adapters for some multi-tools. The best replaceable knives have become widely popular but have also drawn plenty of ire and criticism.

Any razor-sharp knife is going to be easier to use and more effective than a dull one. Another big advantage of replaceable-blade hunting knives is that you can keep that edge up and running in the field by quickly changing blades. Where this starts to really make a difference is in precision skinning and caping work. Every blade dulls and requires maintenance, and when it’s time for the precision work, you need an edge that’s at its best. Fixed or replaceable, there are few things better for precise skinning, caping, and taxidermy prep than the scalpel-style blades. Thin, flexible, precise, and sharp, they make short work of tasks that a full-sized fixed-blade hunting knife would fumble.

With the thin, fine edges of most replaceable-blade hunting knives’ scalpel blades comes a sacrifice in durability. The blades are very sharp, but the edges aren’t as durable as a fixed-blade hunting knife. With general use like skinning, field dressing, and breaking an animal down, the edge will dull much more quickly than many fixed-blade knife edges. That’s why you’ll pack replacement blades.

Another downside to replaceable-blade hunting knives is the disposable product that they are. The blades can usually be touched up and re-sharpened, but most people aren’t going to bother—it’s easier and cheaper to use a new one. If people are sloppy, blades that are discarded in the field can present a danger to other people and animals. It’s also just poor form.

Chances are that if you’re using a replaceable-blade knife, you’ll eventually have to change blades in the middle of a skinning job. It’s critical to be familiar with changing the blades on your knife—especially when it’s caked in blood and fat. Some blades are tedious to change, and if you mess up, you can cut yourself badly. That’s a recipe for disaster in the backcountry.

A common complaint about replaceable-blade hunting knives—namely the scalpel style—is that the blades break easily. It’s true that the blades can be broken more easily than a fixed blade, but I’m hesitant to list it as a true disadvantage. The user simply needs a little more culture and finesse. Did you expect to open old paint cans with your hunting knife?

Fixed-blade hunting knives don’t fold and use a sheath of some type to keep the blade covered. They’re simple, effective, and their basic design hasn’t changed for thousands of years—even longer than the .30/06 has been around. Some hunters can’t understand why anyone would mess with a good thing, and they have a point.

There’s a lot to be said for durability in a tool that you depend on in the backcountry, and that goes for knives too. Contrasted with one of the biggest drawbacks of replaceable-blade hunting knives, a good fixed-blade hunting knife can withstand much more abuse. It’s generally much more useful for all-around camp and cutting tasks, and it doesn’t require the same amount of finesse to avoid breaking blades.

The variety of steel that you can get in fixed-blade hunting knives is another advantage. Some knives have very hard steels like S30V or S90V, and once an edge is sharp, it will hold that edge for a long time. Other knives are made with softer steels that still hold edges better than replaceable blades, but are easily touched up and re-sharpened.

Proponents of fixed-blade hunting knives will often say that you should just learn to sharpen a knife and get something that will last. I don’t agree with the oft-implied sentiment that replaceable-blades are only for lazy hunters who can’t sharpen a knife. I do agree sharpening a knife is a skill you should learn. A good fixed-blade hunting knife will last you a lifetime. I have an old Puma Hunter that belonged to my grandpa, and that knife has skinned who knows how many moose. I still bring it to moose camp and use it. I doubt I’ll be passing down my Havalon to my kids.

Even among the lightest fixed-blade hunting knives like the Iron Will K1 Ultralight, you won’t get the precision and flexibility that you get with a scalpel blade. The differences begin to diminish when you’re getting down to the nitty gritty of fine detail work, but it’s a valid consideration. I’ve carried a Benchmade Altitude in my pack for sheep for a few years and used it to handle most skinning and cutting, but I still bring a Havalon to do the fine skinning work. Arguably, I can completely do without both, and objectively, I’m better off just using the replaceable-blade hunting knife for a sheep hunt.

Fixed-blade hunting knives will lose their edge in the field and need re-sharpening, but this happens more slowly than with scalpel blades. Once you’ve learned how to sharpen and maintain a blade this isn’t a big deal, but it can be inconvenient. Sometimes it’s difficult to get the edge as sharp as you want it.

Another downside to fixed-blade hunting knives is that they take a little more time to maintain and require you to carry at least minimal sharpening tools. If you have the option of swapping blades, it’s almost always going to be quicker than sharpening. One might think that guides who deal with lots of animals would always prefer a fixed-blade hunting knife, but that’s not always the case. On hunts in South Africa, New Mexico, and West Texas, I noticed the guides and skinners all used replaceable-blade knives for frequent daily field-skinning work.

If you’re skinning out the heads of your trophies in the field or prepping them for taxidermy, you’re probably better off using a scalpel-style knife. This is especially true if you don’t care to deal with edge touch-ups in the field and might be working on multiple animals.

If you don’t mind sharpening, want a larger or more durable blade, or won’t be doing any of the precise skinning work yourself, it’s hard to go wrong with a good fixed-blade hunting knife. Ultimately, the more you do, the more useful you will find each type of knife for certain things.

The Havalon is the standard for replaceable-blade hunting knives. Blades are standardized, simple, precise, and razor sharp. You can’t go wrong. I’ve cut up everything from hares to Alaska moose with them.

The Saddle Mountain Skinner is one of my favorite hunting knives when weight isn’t an issue. It’s a quintessential fixed blade with a drop point and great ergonomics. The S90V steel takes some skill and patience to touch up, but it holds an edge incredibly well.

Surprisingly, these kitchen knives are some of the best skinning and taxidermy prep knives you will ever find. They are light, with flexible and precise blades—better than even the scalpel blades if kept sharp. The caveat is that they require frequent sharpening. Keep them razor sharp though, and there’s no skinning task they can’t handle. I use these knives almost exclusively for any in-shop skinning or prep work.