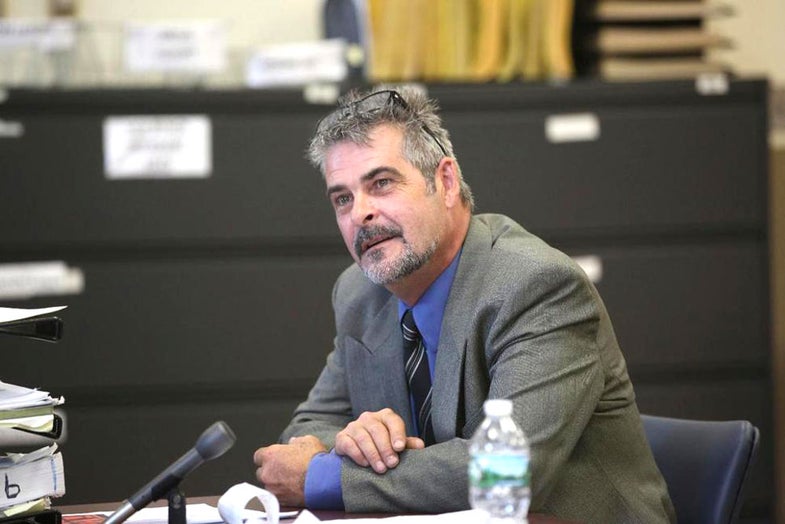 A bill proposed by Sens. Mike Lee (R-Utah) and Mike Crapo (R-Idaho) in the Senate, and Rep. Steve King (R-Iowa) in the House, would regulate suppressors as over-the-counter firearms accessories rather than require that they be transferred through federal firearms licensees after a background check.

The Silencers Helping Us Save Hearing (SHUSH) Act—S.1505 in the Senate and HR 3139 in the House—would remove suppressors from National Firearms Act requirements.

“Suppressors can make shooting safer for the millions of hunters and sportsmen that exercise their constitutional right to use firearms every year,” Lee said in a statement published by the Associated Press. “The current process for obtaining a suppressor is far too expensive and burdensome. Our bill would remove these unnecessary federal regulations and make it easier for firearms users to protect themselves.”

Like the Hearing Protection Act, HR 367, which has 154 co-sponsors and has been idling before the House Subcommittee on Crime, Terrorism, Homeland Security and Investigations since February, the SHUSH Act would eliminate the $200 transfer tax on suppressors by dropping them from NFA rules.

Unlike the SHUSH Act, however, the Hearing Protection Act still requires suppressors be transferred through federal firearms licensees after a background check, regulating them the same as firearms instead of as firearms accessories.

In addition to proposing a bill that makes sense in the real world, the bill’s two Senate sponsors are clearly advocating on behalf of constituents’ financial interests—which is their job in a representative democracy, despite the conjuring of sinister overtones by gun control zealots. Gemtech, a well-known suppressor manufacturer, as well as a host of smaller manufacturers such as StingerWorx, Ballista and Tactical Innovations, are based in Idaho while SilencerCo and OSS Suppressors are among Utah’s firearms industries.

— The Best Silencer Deregulatory Bill Ever! The SHUSH Act Introduced!

The House Energy and Water Development and Related Agencies Appropriations Subcommittee on June 28, issued its preliminary approval of a proposed $37.56 billion FY 2018 Energy and Water Appropriations Bill , which includes a provision that would lift the 40-year ban on carrying firearms for self-defense on 12 million acres of federal public land controlled by the U.S. Army Corps of Engineers (USACE).

Despite the claim by some in the gun-control lobby—such as the hysterics at the Center for American Progress—the provision is not being “buried” in the massive bill to avoid scrutiny, but merely being presented as procedure because the USACE itself announced in March that it is changing its policy to allow visitors to carry personal firearms, even when not hunting.

Of course, the corps has been forced to reconsider its policies after losing one federal lawsuit in the 9th Circuit Court—Nesbitt v. U.S. Army Corps of Engineers—and being challenged by another suit in the 11th Circuit. Bills proposing to change the policy for the USACE have been circulated for nearly a decade, including as a provision in the same annual appropriations bill it is currently “buried” in.

So, no surprise, no skullduggery, no chicanery here by the “powerful gun lobby,” just lawmakers proposing to do away with a dopey law that even the agency responsible for imposing it acknowledges is dopey.

Nor is the proposal anything nefarious or “new” in reference to firearms regulations on federal land. The National Park Service and National Wildlife Service restored the Second Amendment in national parks and wildlife refuges in 2010.

The proposed FY 2018 energy and water appropriations bill   states “the secretary of the Army shall not promulgate or enforce any regulation that prohibits an individual from possessing a firearm, including an assembled or functional firearm, at a water resources development project” overseen by the Army Corps.

President Trump, responding to gun owners and sportsmen wishes, promised while campaigning that he would do away with the USACE’s gun ban and could make the legislation and litigation unnecessary by simply changing the policy administratively.

— Second Amendment may be restored on Army Corps of Engineers land

John Cramsey, 51, of East Greenville, Pa., was arrested on June 29, 2016, when New Jersey police stopped his van because of a cracked windshield as it was entering the Holland Tunnel bound for Manhattan. Upon inspection, police found the van—emblazoned with neon-painted Second Amendment decorations—was loaded with long-range weapons, handguns, ballistic vests and a camouflage helmet with night-vision goggles.

Cramsey, a vocal anti-heroin activist whose daughter died of a heroin overdose last year, and fellow Pennsylvanians Dean Smith and Kimberly Arendt, were allegedly on a mission to rescue a teenaged girl from a heroin den in Brooklyn. Instead, the three were charged with various crimes because New Jersey has more stringent gun laws than Pennsylvania. It doesn’t recognize carry permits from other states, and guns in cars must be kept locked and unloaded in a trunk or secure container.

Smith, who publishes a local magazine, says he came along to film a video interview with Cramsey. Arendt was a former camp counselor of 18-year-old Jenea Patterson, who reached out to her after another girl she was with died of a drug overdose, prompting Cramsey to make his rescue attempt. Patterson later denied she was seeking help and died in January of a drug overdose.

Smith and Arendt have been entered into a pretrial intervention program. They were able to skip prosecution and can later have the arrest charges erased.

Cramsey’s lawyer, James Lisa, wanted the same for his client but was denied on July 6 by Hudson County Superior Court Judge Mitzy Galis-Menendez, who offered a plea deal that calls for five years in prison with a chance of parole after 3 1/2 years, followed by three years of probation. Lisa said he’d appeal, but if that failed, he’ll ask Republican Gov. Chris Christie for a pardon.

According to The Jersey Journal, “Christie has made fighting the opioid epidemic a top priority and has also pardoned other out-of-state residents caught up in New Jersey’s tough gun laws.”

The Journal has posted a poll to help Christie decide. As of July 7, more than 540 votes had been cast with those who say Christie should pardon Cramsey narrowly leading those who, somehow, believe it is a good and just thing that he spend five years in prison, 49 percent to 47 percent with 4 percent taking the time to actually click the “I Don’t Know” box.

Feel free to cast your vote.

— Anti-Drug Activist to Seek Pardon From Christie in Gun Case

— Should Christie pardon a man charged in the Holland Tunnel gun cache arrest?

— Oregon: Lawmakers pass bill to take guns away from those deemed at risk of suicide, shooting sprees

— What’s next for CA gun laws after SCOTUS turns down concealed carry case?

— Wisconsin: Do you favor a bill allowing gun safety to be taught in state public high schools?

— Chicago Defender: Trump Should Not Be Able to Use Executive Orders to Erase Obama’s Executive Gun Control

Florida Ruling: A Sudden Stand Down For ‘Stand Your Ground’

According to The Miami Herald, Hirsch’s 14-page order claims that changes to the law are “procedural” and, therefore, could only be legally crafted by the Florida Supreme Court instead of by the Legislature, making the revised law unconstitutional.

The Legislature modified the 2005 statute to require prosecutors prove by “clear and convincing” evidence that someone wasn’t acting in self-defense. Gov. Rick Scott signed it into law in June.

According to The Herald, Hirsch’s ruling likely will lead to legal wrangling in the appellate courts and the Florida Supreme Court. Kylie Mason, a spokeswoman for Attorney General Pam Bondi, told The Associated Press they would appeal the order. Scott spokesman John Tupps to The Herald that the governor’s office is reviewing the judge’s ruling.

Sen. Rob Bradley (R-Fleming Island) told The Herald he believes the Legislature acted lawfully. “I would be surprised if this decision were upheld at the appellate level,” said Bradley, a former prosecutor.

— What’s next for CA gun laws after SCOTUS turns down concealed carry case?