The 6 Best Hunting Shotguns of All-Time

These are the best autoloaders, pumps, and break-actions ever built 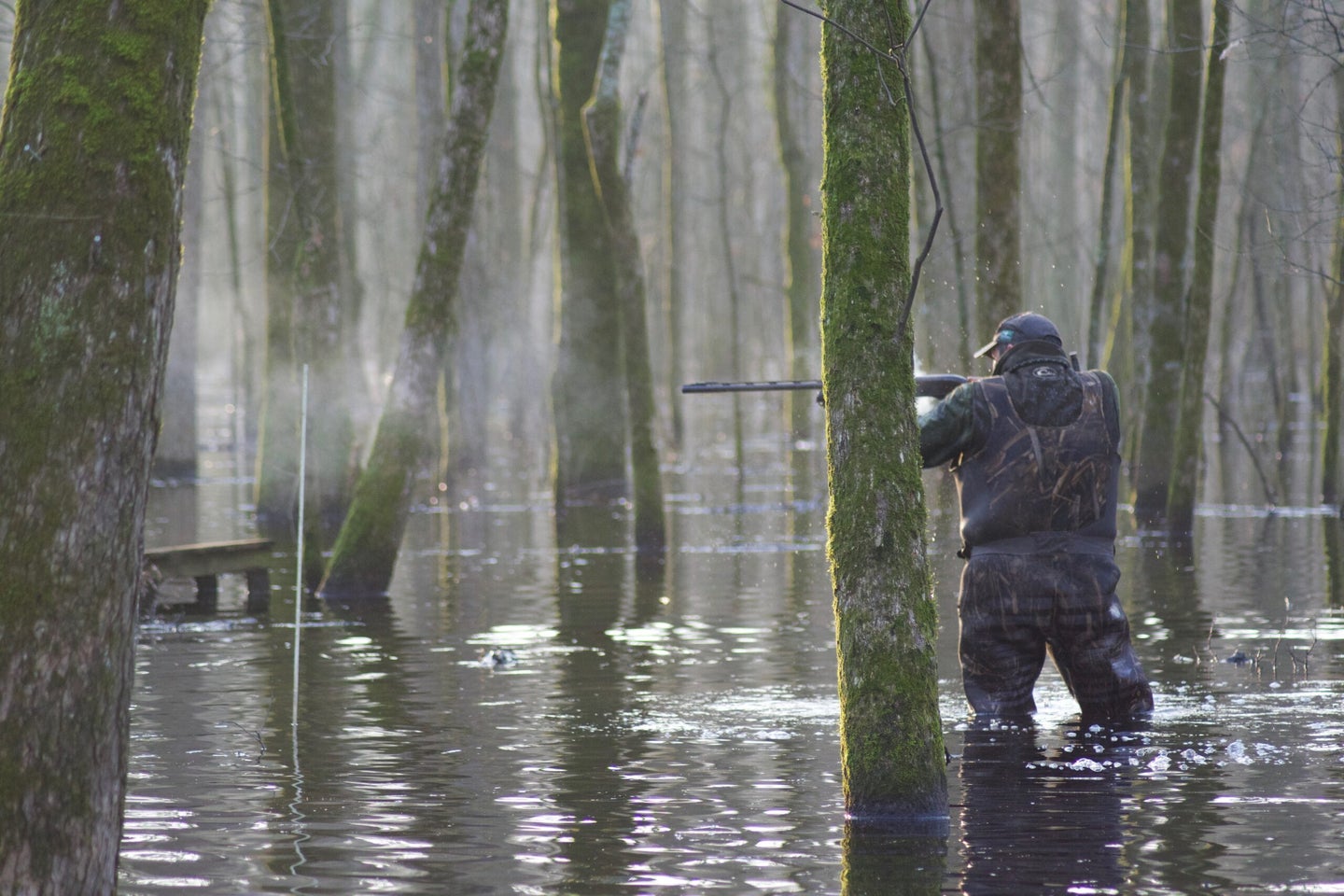 The best hunting shotguns in each class. Joe Genzel
SHARE

There are so many production shotguns—new and used—for hunters to choose from when there’s not a massive gun shortage going on. But what are the best 12-gauges in each category? I’m talking the best side-by-side, over/under, gas autoloader, inertia-driven autoloader, pump, and single-shot hunting shotguns that were ever built. Sure, it’s a subjective debate, and it also depends on what species of wild game you hunt. But for the purposes of this article, I’m going to select the top gun in each class based on design, affordability, aesthetics, and handling.

These are the best six shotguns (broken down by operating system) to ever come off an assembly line.

Hunters shoot gas-operated autoloaders because they allow us to shoot a variety of loads—from skeet to magnum turkey shotshells—without jamming. Modern gas guns also typically require minimal maintenance, though that was not always the case.

My gas gun of choice is Beretta’s AL 390. Beretta built other fine gas guns before the 390, but this is the gun that was the basis for today’s excellent Beretta semi-autos. The 390 was made to be a versatile gas-driven autoloader. You can use it for any kind of bird-hunting pursuit. It’s light enough to carry in the uplands, and it can cycle heavy waterfowl or turkey loads, no problem.

That may not be a major selling point now, but its ability to shoot target loads along with magnums was a big deal when the gun roared onto the scene in the mid-1990s. Remington’s 11-87 design had bridged the gas auto gap before the 390, but the Beretta debuted a more efficient gas system that only used a specific amount of gas needed to work the action with an individual load. Heavy 3-inch shells require less gas bleed off than a light 2¾-inch shell. The 390 was able to better regulate the amount of gas that exited piston holes and fore-end vents in accordance with the size of the payload, which allowed the gun to function more reliably.

I remember the reaction of fellow snow goose guides in Texas when I showed up with a 390. We were all pump gun stalwarts and they were skeptical of the 390. By the next fall, several of the guys were toting 390s because it held up so well. If you can convince snow goose hunters that a gun is dependable, it’s a good buy.

The Browning Auto-5 and Benelli’s Super Black Eagle were the two inertia-driven shotguns that changed the game for many hunters because both guns were such a step up in the reliability of semi-auto shotguns. But, because of its simple design, featuring a short recoil inertia system that can tackle 3.5-inch shotshells (and because it’s so easy to keep clean), the SBE gets the nod over John Browning’s iconic autoloader.

Browning’s design features friction rings and a large spring located in the fore-end that allow the entire barrel to move backwards into the receiver when you pull the trigger. The recoil ejects the spent shell and as the barrel moves forward, it loads a new one from the magazine. It works well, but if you install a ring improperly after field stripping it, don’t properly lubricate the spring, or shoot too light a load, the Auto-5 becomes a single-shot shotgun.

Benelli’s recoil spring is located inside the stock and is essentially maintenance free. You do need to worry about it rusting if the gun falls in the water. Just remove it and allow the spring to dry. It can wear over time and require a replacement. Every spring will lose some elasticity with heavy use. It’s an easy fix with a factory part or an aftermarket kit.

Engineer Bruno Civolani is credited with the inertia design that drives the Benelli line. It’s often said that imitation is the sincerest form of flattery and multiple brands build inertia-driven autos today, including Browning, that mimic Civolani’s concept.

Picking just one side-by-side was the most difficult task of all. There are countless high-end double guns from London, Italy, and Spain that could top this list, but hardly any of us can afford them. So, I chose a “reasonably-priced” shotgun, though buying a fine-shooting side-by-side will still cost you a few thousand dollars.

The Parker VH is not an ornate shotgun, but it’s not a base model either. It’s a solid example of quality gunmaking from a time in American history when craftsmanship truly mattered. Parkers got the nickname “Old Reliable” for a reason—they hardly ever failed.

Parker shotguns are solid and durable yet sleek enough for lively handling in the uplands. These guns are tough, built in an era where guns were expected to last a lifetime. Born in Meriden, Connecticut, in the 1860s, Parker shotguns were the brainchild of Charles Parker. Initially, the company focused on repeating rifles used in combat by Civil War soldiers. By 1868 shotguns were being built from machine manufactured parts and assembled by hand.

The lower in the alphabet the Parker model is, the lower the grade. The VH (the V stands for Vulcan, a reference to the barrel steel) is a workhorse. It may look plain on the outside, but it’s one hell of a double gun. There were over 78,000 VH models produced for an original price tag of $37.50. These guns are not rare, but a working VH will cost around $2,500 to $3,000. That’s considered affordable for a side-by-side, though you can certainly find them cheaper.

This choice was an easy one. No manufacturer makes a better over/under for the money than Browning. The Citori turned 50 in 2021, and it’s hard to imagine Browning would ever discontinue this line—it’s beloved by so many hunters and clays shooters.

When Browning decided to contract Miroku Corporation of Japan to produce the first Citoris, there was some blowback from American gunners. The “Made in Japan” label had hunters skeptical, but that quickly went away after folks started getting these over/unders in their hands.

Citoris are based on John Browning’s Superposed design. Both guns were built on box-lock actions, and the designs rely on barrels pivoting on full-length hinge pins and closing with bolts and underlugs. One place they differ is the fore-end. The Citori fore-end has to be taken off before the barrels can be removed and the Superposed barrels remain attached. The Superposed is also a better made shotgun than the Citori, but you will pay for that craftsmanship. A used Citori can be had for under $1,000. There have been dozens of Citori variations produced in .410 bore and 28-, 20-, 16, and 12-gauge. They’re all fantastic guns.

An interesting historical note: The Citori was not the first Browning gun to be produced by Miroku. That distinction belongs to the BL-22 rimfire lever-action rifle. Browning started Miroku with the BL-22 as a sort of test to see if the Japanese could handle making the Citori.

By far the best-selling American shotgun at over 11 million units, the Remington 870 is available in many configurations, including sporting, home-defense, and military configurations. There are two versions of the 870, the Wingmaster and Express. The Wingmaster is the better of the two. It was built with higher quality parts, the fit and finish are superior, and the action is butter smooth.

The Winchester Model 12 is a close second, but it’s a more expensive gun than the 870. It’s also more complicated to field strip, and can be a pain to maintain.

Read Next: 5 of the Best Production Shotguns of All-Time

The 870 Wingmaster came into production in 1950. It was built with a strong walnut stock and made of hardened blue steel. These shotguns are built for work and can take a tremendous amount of punishment. It’s almost impossible to wear them out. I know of a few hunters that have had to replace parts, but most Wingmasters are timeless. They are do-all shotguns. And if you can only afford one shotgun, buy an 870.

Winchester’s Model 37 is everything a single-shot should be: a no frills gun backed by American craftsmanship that was built for hardworking folks. It can handle any kind of small game, and though you wouldn’t buy one to specifically hunt deer, it can do the job on whitetails during gun season.

Winchester 37s were introduced in 1936 as America was coming out of the Great Depression and a lot of the country still lived in rural areas. People didn’t have money to burn, but they needed an affordable gun they could rely on to put rabbits or quail in the pot. Winchester had built the guns that tamed the American West, and then added a gun to keep the family fed with the 37. They were offered in 12-, 16-, 20-, and 28-gauge, plus .410 in a standard model. The 37 was later released in a boy’s model in 1958.

It’s elegant in its simplicity with a cool little charging hammer that clicks precisely into place when you cock it and pull the trigger. Interestingly, no 37 was ever produced with a serial number.

How to Pick the Best Shotgun for You

The fit of a shotgun is the most important component in selecting a shotgun. Before you buy any shotgun, make sure you are comfortable with it, and that the gun feels good when you mount it to your shoulder. It’s also smart to bring a friend along so they can stand at the muzzle (the gun must be unloaded, of course) and look down the barrel to see if your eye is alined properly with the front bead. Since most of us can’t shoot a gun before we buy it, this is a good way to know if you will be accurate with the gun, and thus will determine whether or not to purchase the firearm.