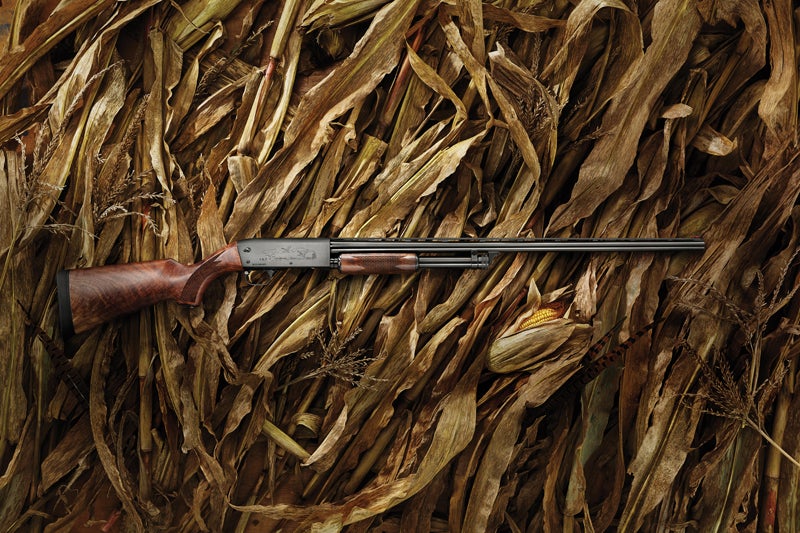 The Ithaca M37 is one of two bottom-eject shotguns still in production. Ithaca Gun Company
SHARE

Bottom-eject shotguns are unique in that the shotshells are loaded and ejected from the same port. On most pumps, two carrier “fingers” work with a magazine stop to allow a spent hull to eject while briefly stopping the new shell from entering the chamber before the fingers lift it into battery. Bottom-ejects have been proven to be versatile sporting and hunting shotguns. They have also been used by police, military, and civilians for home defense.

The Browning BPS and Ithaca 37 are the only two bottom-eject shotguns currently in production. Both have a niche, but loyal following. But they never would have come to fruition without the innovation of early gunmakers like John Browning, John Pedersen, and G.H. Garrison. Here is a closer look at the bottom-eject shotguns that have had the most influence on the evolution of the platform, and one semi-auto that didn’t.

Remington beat Winchester to the internal hammer pump shotgun with the introduction on the Model 10 in 1908 (production began in 1910). John Pedersen designed Remington’s first pump-action shotgun to include a five-round tubular magazine and bottom ejection in 12-gauge only. The popular pump at the time was Winchester’s 1897, a side eject with an exposed hammer. But Pederson wanted a create a pump that brought the hammer inside the receiver housing. To open the action, you simply pressed a button on the right side of the receiver. That button projected when a shotshell was sent into battery, so you knew that the gun was loaded and ready to fire. There was also a unique slide safety at the front of the trigger guard, making the gun user-friendly for right- and left-handed shooters. Remington 10s were built with a pistol grip stock and came in barrel lengths that ranged from 26 to 30 inches.

The Model 10 never became widely popular among hunters, but a limited number of them designated as the 10R (for riot) were used in World War I. These guns sported 22-inch barrels. A wooden hand guard acted as a heat shield, and the shotgun had lug adapters to affix a bayonet. Only 3,500 were made. An original condition 10R is considered a collectable and quite valuable. C.C. Loomis updated the 10 with the Remington 29 in 1930.

The Model 17 technically was born in 1913 from a John Browning design patented in 1915 and sold to Remington Arms. Remington couldn’t bring it to the civilian market until 1921 (post World War I) because much of its manufacturing was tied up in supplying military arms. This sleek pump-action shotgun was only available in 20-gauge. It was also a takedown. The fore-end cap could not be removed from the Model 17. You simply loosened it, and the barrel slid forward. The 17 had a four-shot magazine with barrel lengths that ran from 26 up to 32 inches. There was a “security” model manufactured in the 1920s that had a 20-inch barrel and cylinder bore choke.

A total of 73,000 were built between 1921 and 1933. Browning’s initial design was altered by John Pedersen and G.H. Garrison who both made improvements to the 17. The blueprint of this shotgun influenced many of the most noted pumps in history, including the Remington 31, Ithaca 37, Browning BPS, Remington 870 and Mossberg 500.

During the 1930s every gun company was trying to build a pump better than Winchester’s Model 12. Ithaca was no exception. Remington’s 17 gave birth to the Model 37. Ithaca liked the sleek lines of the 17 and the bottom-eject feature. The gun was based off John Browning’s design, but Harry Howland made a few changes to the firing pin and the ejection mechanism. Plans were made to debut the 37 in 1933 as the Ithaca 33. But Pedersen’s patent for the 17 didn’t expire until 1937. Since Howland used the 17 as the basis for his pump, Ithaca had to wait four years and called it the Model 37.

The shotgun, dubbed the “featherlight,” was built in several variations. Defense-style 37s with barrels as short as 13 inches have been used by the military and police forces around the country. It proved a reliable firearm during the Vietnam War because the chamber was enclosed, making it more difficult for the chamber to become compromised by jungle mud. For hunters, the M37, which is still being made, was originally available in 28-, 20-, 16- and 12-gauge. The Ithaca Deerslayer remains the favorite of many whitetail hunters during shotgun season. They were lightweight for shotguns made at that time. The 12 was only 7 pounds and the 20-gauge was 5 3/4 pounds. Model 37s can have a solid or ventilated rib depending on the year they were made and come with barrel lengths from 24 to 32 inches.

John Browning was a major player in the development of pump shotguns, but Browning Arms stuck to semi-autos (Auto-5) and double guns (Superposed) during the early days of the company. But eventually Browning (the company) saw a need to compete with Remington, Winchester, and Ithaca in the pump shotgun market, and developed the BPS (Browning Pump Shotgun).

In the 1970s, Browning shifted much of its manufacturing from Belgium to Japan. The BPS went into production at the Miroku factory in 1977. Designers used John Browning’s Model 10 blueprint to build the BPS. It has a top-mounted tang safety, which is equally convenient for right or left-handed shooters. A magazine cutoff was incorporated into some models, using a rear rotating ring on the magazine tube. Rotate the ring to “R” (repeating) position for normal use or turn it to “S” (single) and the chambered round can be ejected while keeping the remaining shells in the magazine.

Remington’s 105 CTi, which had a carbon and investment-cast titanium receiver, was the first—and only—bottom eject semi-auto ever devised. Introduced in 2007, the gun mimics the external dimensions of an 1100 but that’s where the similarities end.

A carbon-fiber cover is epoxied over the receiver opening which gives the gun a distinctive look. The bolt sits on a bolt slide, riding on dual bars, and a slot is cut on the right side of the receiver for the operating handle.

The 105 CTi has a speed loading feature that has been popular on Browning autos for decades. With the bolt open, you slide a round so it engages with the twin carrier arms but not the magazine stop. Pull your thumb free and the round lifts into the chamber. Remington called this function “Turbo Feed.” The gun’s chamber can also be loaded by inserting a shell into the magazine with the bolt closed, pulling the operating handle back, and letting it return forward.

A recoil spring slid over the magazine tube, which allowed for a hydraulic piston to be placed behind the 105 CTi bolt for recoil reduction. The oil-filled cylinder provides resistance as more energy is forced into it. Remington designers claimed a 48 percent reduction in recoil.

Feed failures doomed the 105 CTi. Remington revamped the gun in 2009 and recommended a 3-dram, 1 1/8-ounce shell as the lightest ammunition for the bottom-eject auto. The second version of the 7-pound gun was improved, but the platform continued to struggle cycling shotshells. The first shell would fire and be ejected, but sometimes the carrier would bounce up so that a fresh shell could not be collected from the magazine, effectively turning the 105 CTi into a single-shot repeater.