The Remington 105 CTi: A Semi-Auto that Almost Revolutionized Shotgun Design

Remington’s concept was on point, but the execution of this bottom-eject auto-loader was not, and so the CTi was a short-lived experiment in shotgun design 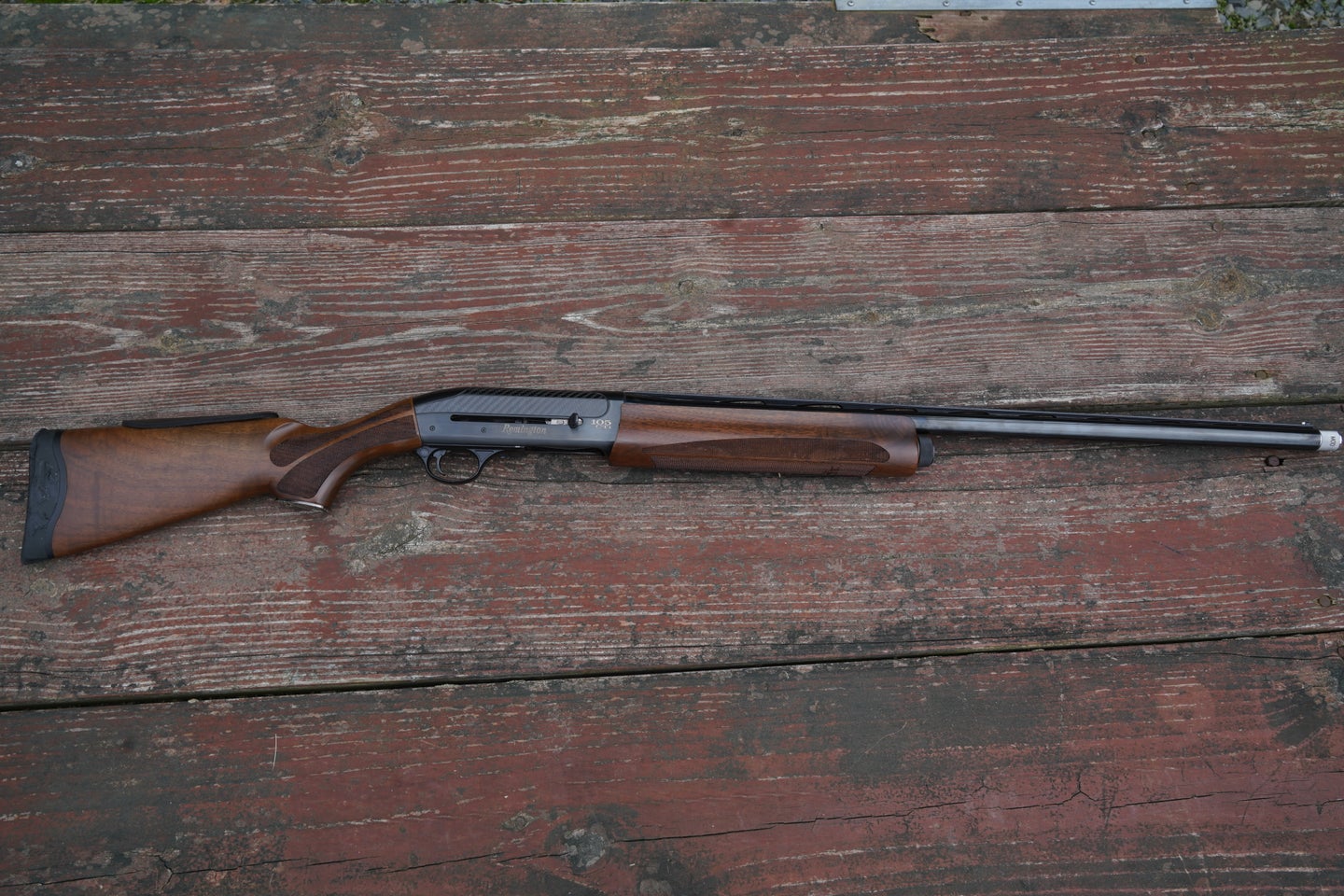 Introduced in 2006, the Remington 105 CTi was a soft-kicking, bottom-eject 12-gauge that could have changed the way auto-loading shotguns were designed forever. It was a sleek gas-driven semi-auto—the operating system was much the same as the Remington 1100—with an over-bored barrel (over boring typically results in more pellet-dense patterns). The receiver was made of investment-cast tungsten with a carbon-fiber coating, keeping the gun lightweight (7 pounds) but also durable. However, there was one problem with the CTi: It would not cycle reliably, which is a serious issue for any hunter that invests in an auto-loader. The engineers at Remington tried to remedy this malfunction with a second iteration—the CTi II—but that gun also had cycling problems and was discontinued in 2009. Since then, no gun manufacturer has brought a production bottom-eject auto with a single load and ejection port machined into the underside of the receiver to market.

The Makings of a Bottom-Eject Auto

The 105 CTi was the first production bottom-eject auto-loader. Of course, John Browning’s design influenced or was responsible for many of the most successful bottom-eject pumps in firearm history, such as the Remington 17, Ithaca 37, and the Browning BPS. Beretta made an auto-loading bottom-eject break-action target shotgun for a time. The unique UGB25—discontinued in 2017—kept one round in the chamber, and a second in an exposed loading tray on the right side of the gun. After the first shot was fired it ejected from the bottom of the shotgun, and a lever fed the second round into the chamber. Butler Shotguns, a Montana-based gunmaker, continues to produce a semi-auto bottom-eject trap gun, though there is a load port located on the right side of the receiver. The 3-inch CTi did not have an open port on the receiver, only a bolt handle that shooters pulled back to chamber the first shell. Like the Browning BPS—and every other bottom-eject pump—there was only one opening under the receiver for shells to be loaded and empty hulls to be ejected.

To function properly, bottom-eject shotguns rely on a yoke-shaped carrier that hangs out just under the top of the receiver. When the 105 is fired it uses the gas propellants from the shotshell (any extra gas is bled off) to send the bolt backward with the extractors holding the fired shell tightly against the bolt face. At the precise moment the bolt comes to rest at the back of the receiver the carrier swoops down (if the platform is operating properly), flipping the fired hull from the bolt and then stops at the bottom of its stroke to pick up a fresh round that’s released from the magazine. As the bolt moves forward, the next shell is lifted and loaded into the chamber.

What the Remington 105 CTi Did Best

The 105’s reversable safety, mounted in the rear of the trigger guard, made the gun attractive to both left- and right-eye dominant shooters. Some southpaws will flip the safety on right-handed guns, but they still must load them as if they were right-handed because the bolt opens on the right side of the receiver and is where the first shell must be chambered. With the CTi, shooters had the convenience of one loading port under the receiver. And since the shells eject forward and down, they don’t fly across your field of view if you are left-handed or into your buddy’s face during a duck hunt.

The 105 action-return spring slides over the magazine tube. This makes the spring more accessible so you can clean it of oil, dirt, and sludge and keep the gun functioning—at least that was the idea. It takes more time—and shooters are less apt to clean it—if the spring is located inside the stock because you must unscrew the butt pad to get to it. That also made room for an oil-dampened hydraulic recoil reducer in the buttstock, which combined with the CTi’s gas-driven platform, helped to mitigate recoil.

There are two phases of recoil in a shotgun; first from the fired shell and second when the bolt hits the back of the receiver. Gas-operated guns like the 105 spread out recoil better than inertia guns, hence they are softer shooting (because they don’t use the recoil to operate).

Unlike some production repeating shotgun triggers, the 105’s is smooth and light (3.5 pounds using a Lyman digital scale). Rather than using the traditional flat mating surfaces on the sear and hammer, Remington’s engineers designed the firing system using a round transverse pin that engages a hook on the hammer.

The 105 sported Remington’s ProBore barrel, back-bored to .735 inches as opposed to the .725 SAAMI-standard for 12 gauges. My test gun from 2006 measured .733 a mere .002-inch difference due to manufacturing variance. Over boring gives payloads more room as they are forced down the barrel at around 900 mph. This feature is especially helpful with larger steel shot for waterfowl and often results in more even patterns.

Where the Remington 105 CTi Failed

I was present for the unveiling of the original 105 CTi at the Remington plant in Kentucky and was given one of the first test guns. I shot skeet with the CTi and goose hunted with it on the Eastern Shore that year. Occasionally my gun became a single shot. There was only a click after the first shotshell was fired, an all-too-common occurrence with the first and second iterations of the shotgun.

The engineers tried to correct the issue: a bouncing carrier that would not consistently load the next shell. As the firing cycle passed the carrier, sweeping the fired hull off the breech face, the carrier bounced up instead of lying in wait at the bottom of the action for a fresh round to drop onto it. The magazine released the next loaded shell, but without the carrier to catch it, the shotshell simply dropped to the ground.

Remington went back to the drawing board, and a year or two later I received an invitation to attend the roll out of the 105 CTi II on a hunt in Alberta. The same malfunction occurred. The first shot went BANG; the second shot was just a click as the hammer struck the firing pin on an empty chamber. Remington’s bottom-eject shotgun essentially died right there on the Canadian prairie. It’s unfortunate, because the CTi was a wonderful design concept, but Remington just could not get the gun to cycle properly.

Here’s another anecdote that encapsulates the star-crossed history of the 105 CTi, as related to me by Outdoor Life’s current shooting editor, John B. Snow.

Each year Outdoor Life conducts an annual gun test, showcasing the year’s newest rifles and shotguns. When the 105 CTi was introduced, a senior engineer from Remington traveled with one of the new shotguns to Johnson City, Tennessee, the home of Jim Carmichel who was OL’s shooting editor in 2006.

The evening prior to the test, the engineer walked the OL shooting team through the features of the shotgun and the next morning he accompanied the shooters to the range. All the shooters were eager to put the Remington through the paces. While the engineer was talking with Carmichel and Snow in the clubhouse, the test team members reported the first malfunctions with the shotgun. After realizing there was an issue with non-Remington branded shells, the engineer turned pale and confessed that they had never tested the gun with any other type of ammunition. He called the plant in Kentucky from the club house and ordered them to halt production—certainly the most costly call a Remington employee could make.

Despite that they were never able to adequately resolve the cycling issue, dooming the 105 CTi.

Read Next: Remington 870 Fieldmaster Review: Torture Testing the Shotgun That Will Replace the Express

I still have my 105 CTi and recently shot it for point of impact on a 16-yard fitting plate. It shot low and left for me, so the CTi would need some stock correction for a proper fit. Sadly, Remington didn’t make an adjustable stock until their VersaMax came along in 2010, so I would have to get a custom stock made, which I am unlikely to do for a shotgun that doesn’t run properly.

I shot several 40-yard patterns through a Carlson’s ProBore aftermarket tube marked Modified. The choke measured .0175, a bit shy of the industry standard of .020. Shooting Winchester Supreme High-Velocity Steel 1¼-ounce No. 2s (156 pellets) the patterns averaged 40 percent at 40 yards, not great for any load at that distance (sometimes a particular shotgun, load, and choke are not meant for one another). But the pellets strikes inside the 30-inch circle were evenly distributed, likely do the over-bored barrel.