Shotgun Review: Remington’s Model 1100 Is Still One of the Most Versatile Auto-Loaders of All-Time

Capable of hunting ducks, upland birds, and busting clays, the old Remington 1100 is still a shooter 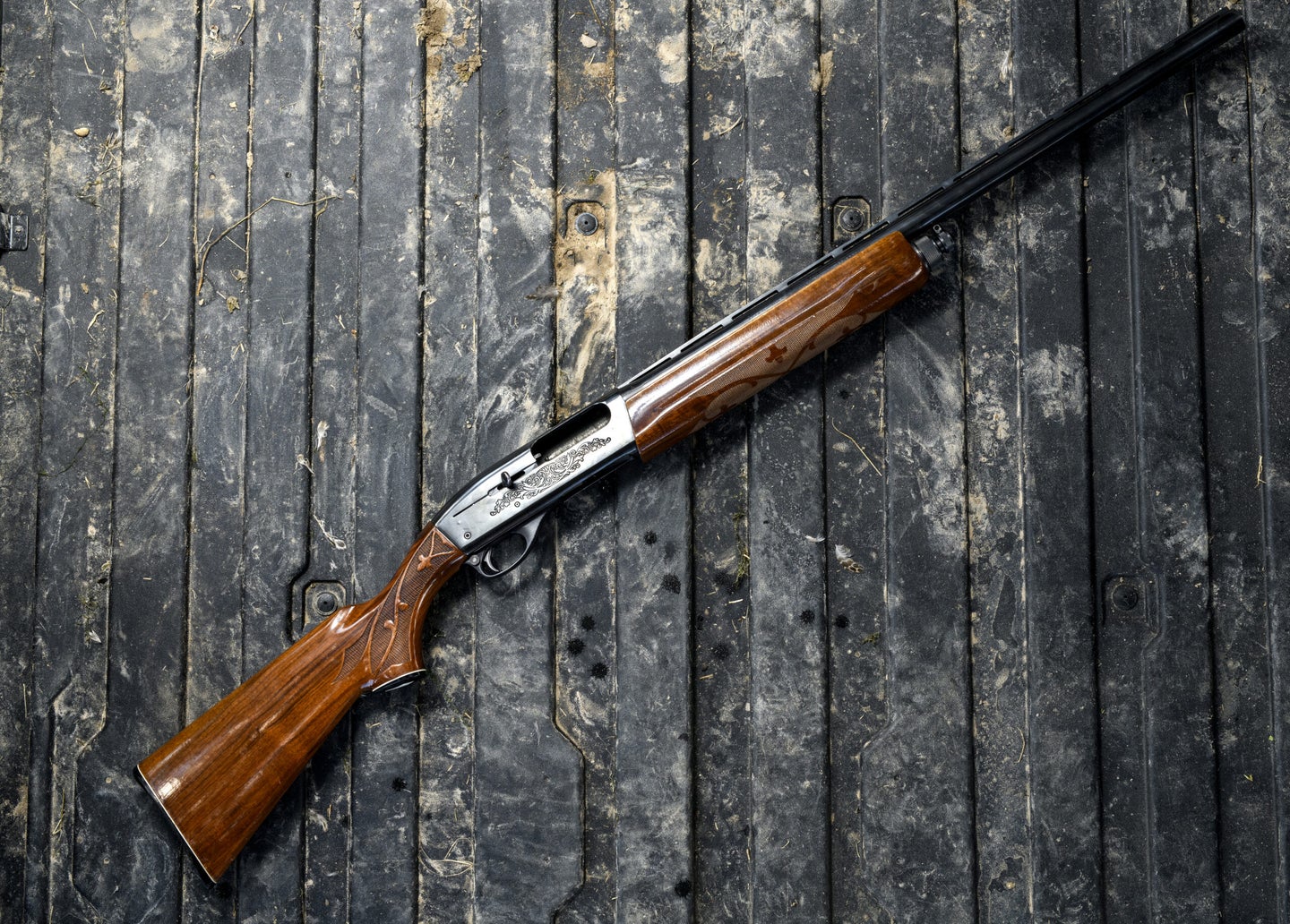 When a shotgun has been around for as long as the Remington Model 1100 has been—it was introduced in 1963—there are bound to be some good stories linked to it. One of my favorites is from 1975 when Patricia Malinosky, the wife of a Remington employee, became the first woman to post a perfect score (breaking 100 clay targets) in .410 registered skeet at the Great Eastern Skeet Championships. Her husband, Carl, also posted a perfect 100 with an 1100, and she went on to beat him in a shoot off to win the event.

The 1100 was one of the most popular clay-target semi-autos of all time, and countless records were broken with it throughout the 1970s. It’s value as a skeet and trap gun is also what makes it so appealing to duck hunters: The 1100 is a tank that weighs over 8 pounds, hardly produces recoil, runs clean courtesy of its gas-operated system, and is affordable, though you will have to find one on the used market since the gun is not in production at this time.

How We Tested the Remington Model 1100

In September 2020, four editors—Colin Kearns and Phil Bourjaily of Field & Stream and Alex Robinson and myself of Outdoor Life—traveled to Pintail Hunting Club in Garwood, Texas, to test 17 of the best duck hunting shotguns on the market. We hunted early-season teal in the mornings and shot five-stand in the afternoons. Bourjaily and I also patterned each of the shotguns from 35 yards, shooting at a 30-inch target. The industry standard for shotgun patterning distance is 40 yards, but that is on the far end of most hunters’ ability to kill a duck. We stepped it forward five yards so shooters can see what the pattern density looks like at a more effective killing distance.

Each editor considered five different categories while testing the 17 shotguns, including how the gun handled and its ergonomics, workmanship and aesthetics, versatility, reliability, and value. All of us tried to make the guns fail throughout the three days of testing, loading the guns at different angles and shooting them from multiple mounting positions, all things that occur while you’re duck hunting.

A majority of 1100s were offered in wood-and-steel models. But there are a few synthetic variants out there. The 12-gauge 1100s are primarily available with a 2¾-inch chamber, though there are 3-inch magnums as well. Remington also produced this auto-loader in 16-, 20-, and 28-gauge, plus .410-bore. It’s available in a variety of configurations, from sporting and field models to a deer-specific platform.

How the Remington Model 1100 Patterned

We patterned our test gun with Remington American Clay and Field 2¾-inch, No. 8s with a muzzle velocity of 1,200 fps and a 1-ounce charge weight. Due to issues with ammo availability, our test group was not able to obtain 2¾-inch non-toxic shotshells for patterning. And we could not hunt teal with the 1100 because we only had access to lead shot. But I’ve hunted ducks with the 1100 in the past and have plenty of experience with the gun.

If you buy an 1100, be mindful of shooting steel or tungsten through it. Remington 1100s made from 1963 to the mid-70s may not be safe for either of those non-toxics. If your gun has a fixed full choke you should only shoot bismuth or Kent Tungsten-Matrix. Remington 1100s with removable chokes should be safe for all non-toxics, but if you’re not sure, talk to a gunsmith or contact RemArms.

You can see by the pattern below why clay-target shooters love this gun. It distributed the pellets evenly throughout the 30-inch circle. The 1100 also shoots where you aim it. The core of the shot column is exceptional, and the 1100’s best pattern placed 320 or a possible 410 pellets (78 percent) inside the target.

How the Remington Model 1100 Handled

The 1100 is a heavy gun, which I like because they are easier to shoot than lighter, whippy autos that you can get moving fast but are difficult to keep swinging through the target. And I don’t mind carrying it on duck hunts, though I understand not everyone wants to haul an 8-pound gun through the marsh. Most of the weight in the 1100 extends from the end of the receiver to the muzzle. That forward weight will help you drive the 1100 past the bill of a duck (if you’re a snap shooter), or keep the muzzle in front of the bird (if you use continuous lead) just before pulling the trigger.

Now, the 1100 does come up slower to your shoulder and it’s harder to get the gun moving because of its heft. It’s not meant for small shooters and would make an awful youth gun. But I think a majority of adults can shoot this auto-loader without issue. Despite being such a heavy shotgun, the 1100 is not bulky. The fore-end is more rounded than any modern shotgun I’ve hunted with, and sits in the palm of your hand nicely.

Out of all 17 guns in the test, this one performed best for me on five stand. We didn’t keep track of the number of clays broken with each gun (because we shot so much), but I know there was no gun in the test I was more accurate with. Gun fit varies shooter to shooter, but some guns are built to fit a wider variety of folks, and the 1100 is one of those.

The Fit and Finish of the Remington Model 1100

Not to sound like your grandfather, but they just don’t make shotguns like this one anymore. The days of walnut-stocked semi-auto shotguns have passed, but after you shoot the 1100 and switch to a synthetic gun—which I did many times in Texas—there is a marketed difference in quality. The old Remington is simply built better than any of today’s semi-auto shotguns.

Our test gun was sent to me by OL senior deputy editor, Natalie Krebs. It belongs to her father. Mr. Krebs has kept this gun in pristine condition. There’s hardly a mark on the wood stock and fore-end. That is likely due to the bullet-proof coating Remington applied to 1100s. It’s similar to the finish on bowling pins and is hard to gouge or chip. The exterior of this wood and steel gun has all the durability of a synthetic option.

The Fleur-di-Lis checking on the pistol grip and fore-end isn’t just for show. It increases the aesthetic beauty of the 1100, but is also functional, giving shooters a better grip. I ran some cold faucet water on the wooden portions of the gun to see how it felt in my hands. Sometimes wood-stocked guns can get extremely slippery when wet, but the 1100 held firm.

Also, this gun field strips easy for a gas-operated auto. Just unscrew the fore-end cap, slide the fore-end off, and the barrel disengages from the action. There is also a gas piston on the outside of the magazine tube. To remove it, you must remove the bolt-handle. The bolt, action bars, and piston then all slide out.

The only thing you might not care for in the 1100 is where the receiver meets the fore-end. They don’t seamlessly transition into one another. The fore-end protrudes about a ½-inch all the way around the receiver, like a small shelf. If you like to put your non-trigger hand closer to the load gate when shooting, it may be slightly uncomfortable.

The Remington Model 1100 Is Versatile and Reliable

There are few hunting pursuits the 1100 can’t excel in. It’s a duck gun of course, and there are aftermarket magazine extensions for it, so spring snow goose hunters can shoot the 1100 during the conservation order. The 1100 plays in the uplands (though you might opt for a lighter 20- or 28-gauge), can kill turkeys, and is a viable deer gun for firearm season.

I have already mentioned how well-suited it is for clay shooting, though some of the older 3-inch magnum versions of the 1100 don’t always reliably cycle 2¾-inch skeet loads. But that’s on a case-by-case basis. If you’re going to shoot clays, stick to the 2¾-inch models or if it’s a 3-inch gun ask to shoot it if you’re buying from a gun shop. Most reputable shops will allow you to take a used gun out and shoot it to make sure it’s functional.

It can be difficult to find non-toxic loads for 2¾-inch 1100s. And when those shotshells are in stock, your options may be limited, though more ammo makers are offering bismuth and tungsten in 2¾-inch loads. But you will pay more for them than straight steel.

I have shot a few different 1100s, including the deer gun model, over the years and never experienced a malfunction with one. During our three days in Texas, it did not fail to cycle a shell. It is important to keep 1100s clean. Gas guns are naturally dirtier than inertia autos, and it’s been my experience that keeping the action free of grit and grime is more important if you’re shooting a gas semi-auto.

Is the Remington Model 1100 Worth its Price Tag?

This gun ran neck-and-neck with the Winchester SX4 for best value in our shotgun test. The SX4 won out because it is more widely available, lighter, and offered in a 3½-inch model. However, the 1100 has proven itself time and again across seven decades. You can buy a good one for as little as $700 on the used market. If you consider what $700 buys you today in a new shotgun and compare it to a used 1100 for the same price, I think the 1100 wins out every time. There simply isn’t a modern shotgun at that price point that is built as well as the 1100.

Read Next: Remington’s 870 Express Is the Best Pump Gun For the Money

Remington has made plenty of quality guns over the course of its more than 200-year history. Though the 870 was more popular, the 1100 is one of the best shotguns in the Big Green stable. There aren’t too many auto-loaders as old as this one—John Browning’s Auto-5 would be an exception—that are still coveted by today’s shooters, and function as well as the 1100 does. It’s definitely a semi-auto that wood-and-steel shotgun purists hope Remington will build again.