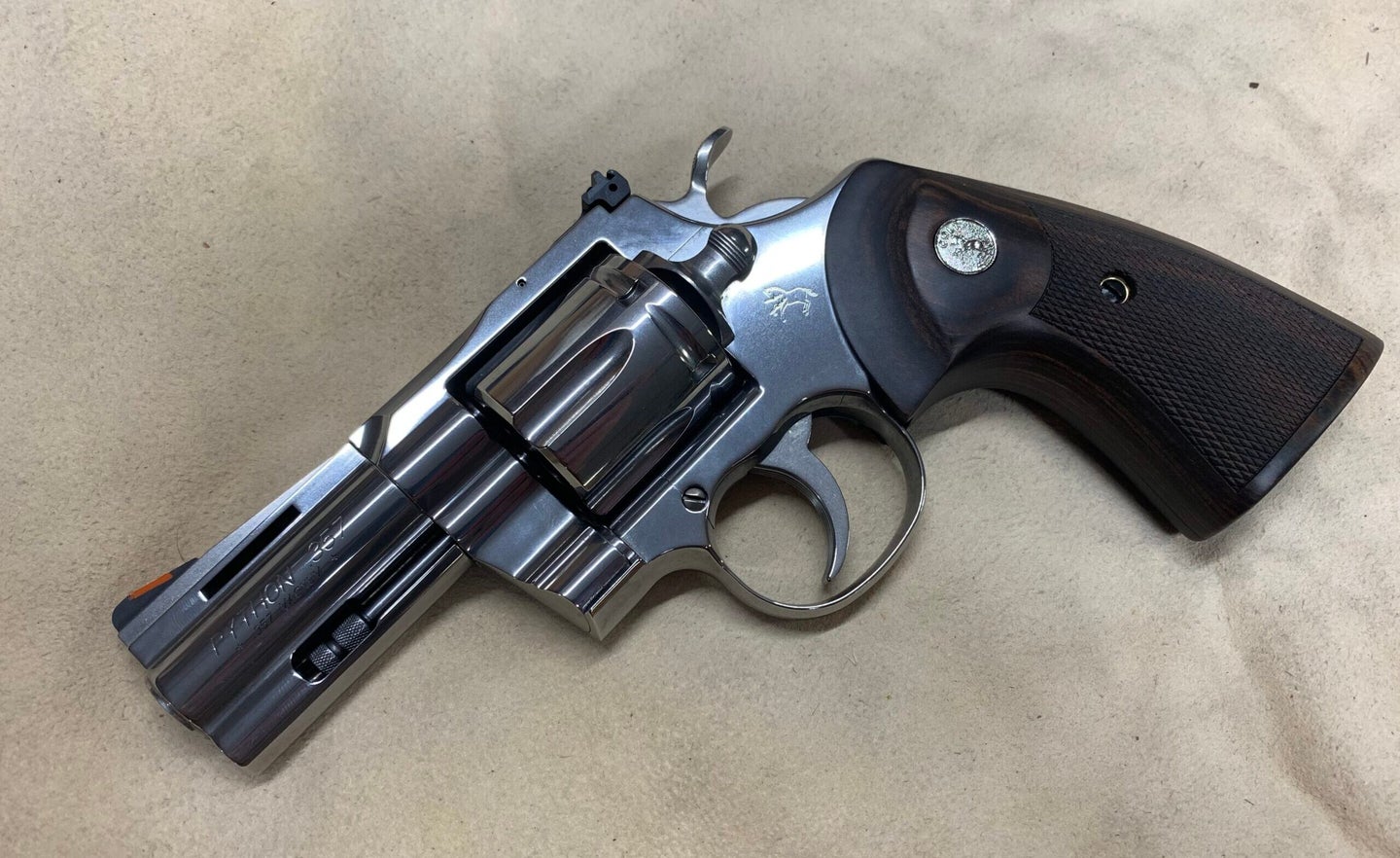 The new Colt Python 3-inch is the latest in the re-introduced Python line. Tyler Freel
SHARE

I find it rare for a gun to possess intrinsic warmth, but the Colt Python 3-inch model reintroduced this year has just that. I don’t mean warmth produced by the combustion of smokeless powder—I mean a genuine warmth that you feel when you pick it up. When you do encounter a gun with warmth, it’s irresistible. That’s exactly what I felt when I first wrapped my hand around the Python’s walnut grip.

I’m not generally much of a revolver enthusiast. I’ve used and carried them plenty here in Alaska—and even shot a couple bears with them—but I find revolvers to be cumbersome. Still, it was hard for me to resist the spell of the snake gun when first picking up Colt’s newest Python model: the Python 3-inch. My eyes see guns as tools, but I couldn’t help feeling that I was holding something special as I turned the shiny new revolver in my hand, carefully wiping any blemishing fingerprints away before setting it safely back into its case.

The re-launch of the Colt Python is old news in 2022, but the 3-inch model had yet to be brought back to production until now. This short-barreled version of the .357 Magnum revolver promises to bring the looks, feel, and essence of the original in an even stronger frame. There are likely few expectations more difficult to meet than those of a classic, and this new Colt has much to live up to.

The Colt Python Casts a Spell

I’ve handled and tested lots of guns, and my first impressions are usually tempered. But my initial impression of the new Python 3-inch was that this is an exceptional production revolver. It’s simple, clean, and the perfectly mated walnut grips feel wonderful in the hand. Everything about this new Python suggested precision and quality. I don’t own an original Python to compare it to, but my Ruger GP100 .357 Magnum that has served me dependably is a quality revolver and a good reference point.

Fit, finish, and attention to detail are superb on the new Python 3-inch. Cylinder latch operation and cylinder swing-out are butter-smooth, and tolerances at lockup are satisfyingly tight. The narrowest sliver of light is visible between the barrel and cylinder, and the cylinder has only the tiniest bit of horizontal play. When the trigger is pressed, and hammer lowered—in full lockup—there is no perceptible play in the cylinder. I’ve seen brand new revolvers with so much cylinder play that I was afraid to fire them. Even my Ruger GP100 has perceptible play in the cylinder at full lockup.

Almost every part on the Python 3-inch fits tighter and functions smoother than comparable parts of my GP100 when it was new. My GP100 has seen some hard use and a lot of rounds over the years but is in excellent condition. The end of the ejector rod is handsomely knurled and the fit between the top of the crane and the frame is incredibly tight—forming an almost invisible seam when closed. Other seams in the frame are equally well-fitted.

Nuts and Bolts of the Colt Python

The new Python 3-inch is neither entirely new nor complex. It has the same lines and other design features that shooters loved about the original Python, including the full-length underlug and vented top strap on the barrel. The frame utilizes the same shape but is stainless steel. Colt says they were able to increase the amount of steel in the frame by 30 percent to strengthen it, particularly under the rear sight.

As the name indicates, the barrel is 3 inches long and finished with a crisp recessed crown. Like other Python models, the revolver can function as both double- and single-action and uses a transfer bar system. Common on modern revolvers, the transfer bar allows the hammer to contact the firing pin but drops away when the trigger is released. It allows the revolver to be carried loaded with a full cylinder without worrying that an impact to the hammer will cause an accidental discharge.

The new Python 3-inch includes a fully adjustable rear sight with windage and elevation screws as well as a windage-locking set screw. Although it’s chambered in .357 Magnum, it’s perfectly compatible with .38 Special cartridges as well. If you find the rear sight to not have the elevation range of movement you need, you can swap out the orange-stripe front sight for one of a different height.

The Colt Python 3-Inch on the Range

Mystique and material seduction can only bring a gun so far, and what really matters about the Python 3-inch is how well it functions and shoots. I don’t need a $1,400 gun just to look at—the gun needs to pull its weight. On the range, I compared the Python 3-inch side-by-side with my trusty GP100. I fired 200 rounds of 158-grain Black Hills Ammo JHP, and an additional box of 50 Winchester .38 Special FMJ loads.

The trigger on the Python 3-inch is fantastic. In a double-action pull, the trigger weight is slightly more than my Lyman gauge will register. However, it broke at a consistent 5 pounds, 7 ounces on single-action pulls with the hammer cocked. My GP100 trigger breaks at 4 pounds, 15 ounces in single-action, but the double-action trigger pull of the Colt is much smoother than that of my Ruger. Total double-action weight may be heavy, but the trigger-pull cycle of the Colt is incredibly smooth with a steady resistance to the break. The trigger-pull cycle of my GP100 isn’t nearly as uniform: It starts stiff, smooths out, then stiffens again before the break. In single-action, the trigger pull of the Python 3-inch is a crisp break with almost no creep whatsoever.

Recoil of the short-barreled Python is notable with full-power .357 Magnum loads. With a two-handed grip it’s a little uncomfortable, but manageable. I find the most discomfort is in the fingertips of my trigger hand. When firing, they’re driven back into the thumb pad of my support hand. Recoil management is the one area where my GP100 pulls ahead of the Python. It has a longer 4.2-inch barrel, and the over-molded rubber grip is more comfortable. The recoil of the Python seems to manifest in an upward-flipping direction and the GP100 directs recoil back into the hands. With some practice, I was able to manage the Python comfortably during fast-paced strings of shooting, and when using .38 Special loads, it’s an absolute pleasure to shoot.

I didn’t expect the Python 3-inch to be a bullseye revolver, but I considered the accuracy good for such a short barrel. From a supported position at 50 feet, I averaged 1.8-inch 6-shot groups with the Black Hills load. That’s completely adequate for a defensive-style handgun, and keeping hits in the A-zone of a USPSA target face at 50 feet was no problem. The smoothness of the gun’s double-action operation certainly aids with accuracy in closer-range rapid fire. Despite the thundering muzzle flash and muzzle flip, I averaged 5 of 6 rounds in the A-zone at 15 feet while shooting as fast as I could pull the trigger.

I didn’t go gently on the Python, and after 250 rounds, the only noticeable difference in use and function was the buildup of carbon in the cylinders. That slowed down the loading and ejecting process a bit. Expecting some break-in movement to show after that amount of shooting—especially when everything starts so tight—I was surprised that the only perceptible difference I noted was a slightly-increased amount of play in the ejector rod when spinning the cylinder in the swung-out position. I only mention it because I had to find something. The cylinder still spins silently, and the fit of the crane into the frame is as tight as when I first wiped away the factory packing oil.

Where the Colt Python 3-Inch Excels

The fit and finish on the new Python 3-inch is superb for a production handgun. Cylinder operation, loading and ejecting, as well as trigger-pull and hammer manipulation are all butter-smooth. It’s a genuinely nice revolver that’s also a workhorse.

I’d like to see the single-action trigger pull just a little bit lighter. My GP100 shouldn’t beat this gun in that category. The recoil impulse is a little less manageable than on revolvers with rubber grips. If you want that style of grip, it comes with the territory.

The Python 3-inch is expensive but compared to similarly priced handguns it exhibits exceptional quality and craftsmanship. The Sig Sauer P320 AXG Pro I recently bought is comparable in price, and it’s a nice pistol, but the Python has something extra. It’s an intangible quality that makes it more than the sum of its parts. If you want a revolver to pass down to your kids, it’s hard to go wrong with this one.