The 930 doesn’t have all the amenities of higher-end semi-autos, but it’s a reliable shotgun that performs when you need it to 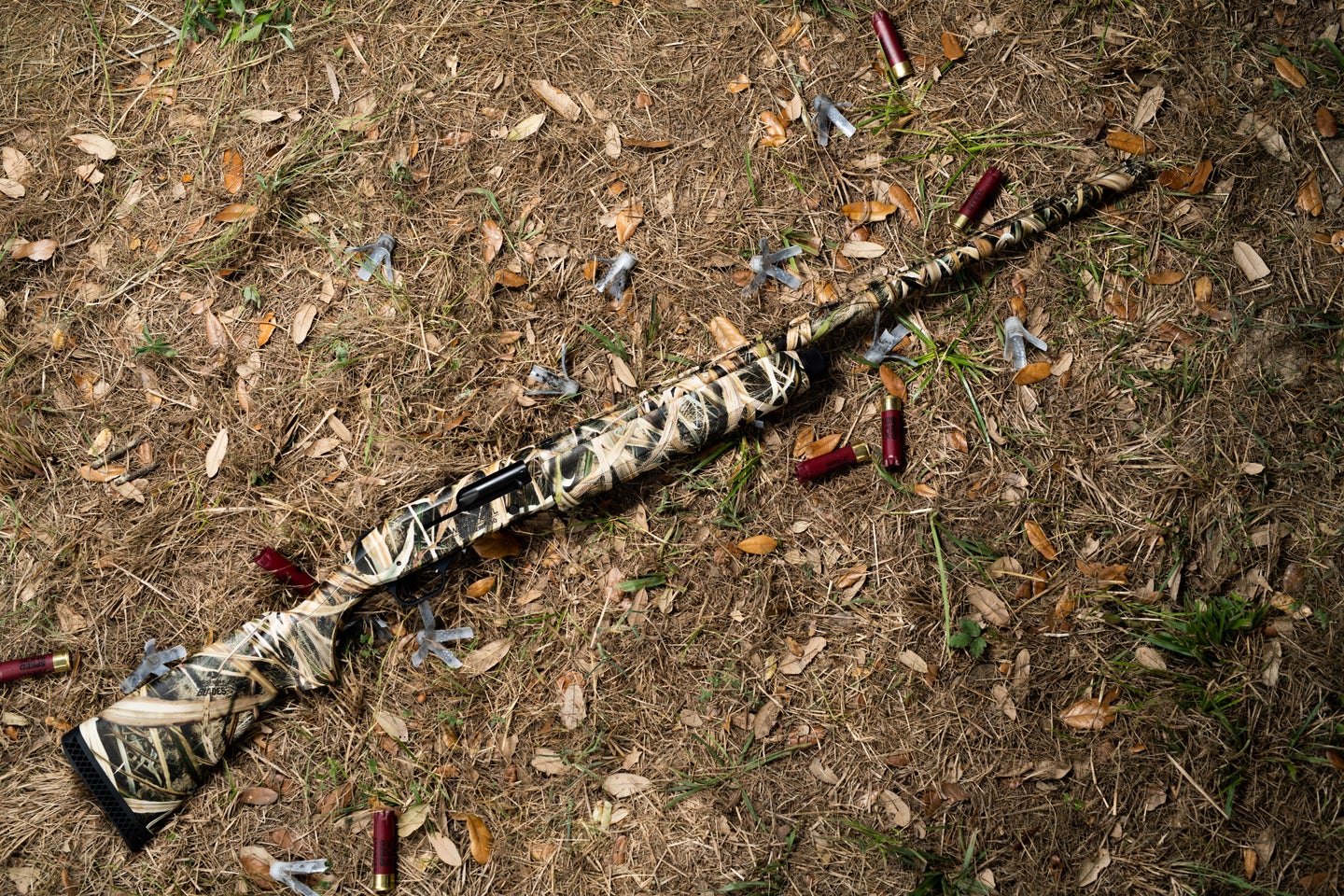 The Mossberg 930 Pro Series Waterfowl has proven to be a reliable auto-loader. Stephen Maturen
SHARE

Mossberg’s 930 Pro Series Waterfowl is not a flashy shotgun. Your duck hunting buddies won’t ogle it like they would an Italian-made auto-loader. But core duck hunters don’t care much about brand-name recognition. We only want a gun that’s reliable and that lasts. And the 930 Pro has proven it can do both ever since the gun was introduced in 2016.

Mossberg is better known for pump-actions—the 500 series is only second to the Remington 870 in number of guns sold—but has been making semi-auto shotguns since the 1980s. Its first auto-loader of note was the 935 Magnum in 2004. For a time, Mossberg semi-auto shotguns had a reputation for not always functioning properly. There were also a few odd designs, notably its waterfowl recoil reduction system. Built into the stock, the system included a Mathews Harmonic Dampener that didn’t do that much to mitigate recoil. It closely resembled a small, circular desk fan.

But the 930 Pro Series has been a workhorse and was well engineered, cycling shotshells reliably. The 930 was built on a gas system and many of the internal parts of the shotgun are treated with boron nitride for better lubrication. I hunted with Linda Powell of Mossberg in Maine for sea ducks with the 930 when it first came out. It was a harsh environment for a gun (cold temps, wind, and saltwater waves crashing against the granite outcroppings we were hunting from—but I never had an issue with the Turkish-built smoothbore.

In September 2021 four editors (myself included) from Field and Stream and Outdoor Life traveled to the coastal prairie of Texas to hunt early season blue-wing teal. We shot birds in the morning over a mix of large water and smaller flooded rice fields. Texas has an abundance of blue-wings this time of year (and throughout all of the regular duck season which runs through January). The 17 duck hunting shotguns we put to the test had to run flawlessly on short hunts with lots of shooting.

In the afternoons, our test group shot the guns on five-stand at Pintail Hunting Club. We also tried to make the auto-loaders and pumps fail by loading them at awkward angles and shooting the guns off shoulder to see if they functioned properly. Phil Bourjaily of FS and I patterned each of the shotguns on 30-inch paper targets at 35 yards. The standard distance for patterning shotguns is 40 yards, but that is on the far end of most duck hunters’ ability with a shotgun, so we settled on 35, a more reasonable distance.

During our three-day test, we also considered how each gun handled, if it was built well, its reliability, versatility, and overall value (is it worth the price you pay for it).

The 930 Pro Series has been replaced by the 940 Pro Waterfowl, but you can still buy it on the used market. Mossberg continues to make the 935 Pro Series, which is the 3½-inch version of the 930 (a 3-inch gun). The 930 is still available in several models for turkey, deer, home defense, clays, and a waterfowl version (it’s just not the Pro Series).

How the Mossberg 930 Pro Series Performed on Paper

To measure the pattern performance of our test guns, Bourjaily and I shot all the 12 gauges with Federal Speed Shok No. 2s. The 3-inch shells carried a muzzle velocity of 1,550 fps and a 1 1/8-ounce charge weight. In terms of pattern percentage, Mossberg’s 930 fell in the middle of the pack. Its best pattern placed 113 of 140 pellets (81 percent) inside the 30-inch circle. There were some noticeable holes in the pattern a duck could slide through. Portions of the lower right and upper middle of the target were devoid of pellets. I didn’t get the chance to shoot the 930 on teal in Texas, but none of our testers complained of sub-standard patterning during our hunts or on five-stand. When I shot the 930 on sea ducks in Maine, it was with a similar Federal shotshell (3-inch, 1 1/8-ounce No. 2 Black Cloud) and I was able to kill long-tails and common eiders just fine when I led them properly.

One of the knocks against Mossberg semi-autos is they don’t have a great finish. But the plastic feel of the 930 won’t stop you from shooting it well. It has a slightly weight-forward balance to it, which is what most duck hunters are after in a shotgun. Waterfowlers like guns that keep moving through the target, and heavy-barreled autos do that better than classic upland guns that have more weight in the receiver.

When I shot the 930 in Maine, killing sea ducks often required long leads. In some cases, speeding long-tails were almost out of my sight picture when I pulled the trigger. I could tell the fit of the 930 helped me be more accurate. I started connecting on 40-yard shots as long-tails quickly appeared from the fog on our final morning hunt. It was one of the few times I have been that precise with a new gun on extremely difficult shots. I know others who have had similar experiences with Mossbergs. The 930, along with many other Mossbergs, fit hunters of all shapes and sizes.

Recoil from the 930 was a non-issue for everyone in our test group. The gas gun has a soft rubber recoil pad affixed to the buttstock. It’s cut in a diamond-shape pattern to allow the pad to flex against your shoulder when the bolt is sent backward. Most shooters shouldn’t feel much kick at all.

The Exterior Finish and Operating System of the Mossberg 930 Pro

The load gate is well done. There’s plenty of room for your thumb to slip shells into the magazine. Same goes for the bolt handle and bolt-release, neither of which are oversized, but are still easy to operate. The safety is tang-mounted, so left-handed shooters don’t have to reach across the trigger guard to take the gun off safe. There’s also a cocking indicator in the front of the trigger guard. It’s a small piece of metal that sticks out to let you know the shotgun is ready to fire.

One gripe I did have was with the fore-end. If you put enough pressure on it with your hand, it will flex. There is also a significant gap between the receiver and fore-end. Ideally, you want the receiver to transition into the fore-end seamlessly, which Mossberg did a better job of on the 940 Waterfowl, introduced in 2021.

The gas piston is located inside a housing attached to the underside of the barrel. Behind it is a metal spacer, followed by a “pusher system.” Two metal rods attached to the pusher send the bolt backward when you pull the trigger, so the shell ejects. The bolt returns forward, and a spring resets the piston, spacer, and pusher, which only travels ¾ of an inch. It’s a slightly different system than you will find in other gas guns. Many older models use a single metal rod that fits snugly into the side of the bolt. The other end of the rod is affixed to a metal tube that slides over the magazine and rides behind the piston. Plenty of new gas autos use a plastic cylinder that slips over the magazine tube and fits into a port on the bolt.

The Mossberg 930 Is Versatile

With a receiver that is drilled and tapped for an optic, the Mossberg 930 can serve as a turkey, deer, or home-defense option (though Mossberg makes plenty of tactical shotguns that are suited specifically to defense). You can shoot clays or upland birds with the 930, though at 7.7 pounds, there are lighter shotguns you can use for hunting pheasant and chukar. Mossberg sells its own magazine extensions, so snow goose hunters will have no problem finding an aftermarket tube for this shotgun.

The Mossberg 930 Pro Series Is Reliable

Because of the boron-nitride treatment on many of the 930’s internal parts, the auto will run with fewer cleanings. The coating also makes the bolt and chamber easier to clean. Grit and grime wipe off quickly because the internals are so slick. I’ve never had a failure, like a light primer strike or hung up shotshell in the action, with the 930.

Is the Mossberg 930 Pro Series a Good Value?

The original MSRP on this gun ($844) was on the high side, but you won’t have to pay that much now that the 930 has been discontinued. You can purchase the gun new for under $700. If you find it for that price (or lower), it’s a good deal. And it’s such a sweet-swinging shotgun, after a while, you will be too busy killing ducks to notice the plastic feel and flex in the fore-end.

Mossberg has come a long way with the quality of its shotguns the last two decades. Their auto-loaders, pumps, and over/unders cater to all hunters, but particularly those that appreciate functionality over beauty. Mossberg is no longer a brand for beginners and frugal shooters. Its guns are built for everyone.