A connoisseurs carry pistol that that operates like a fine Swiss watch. 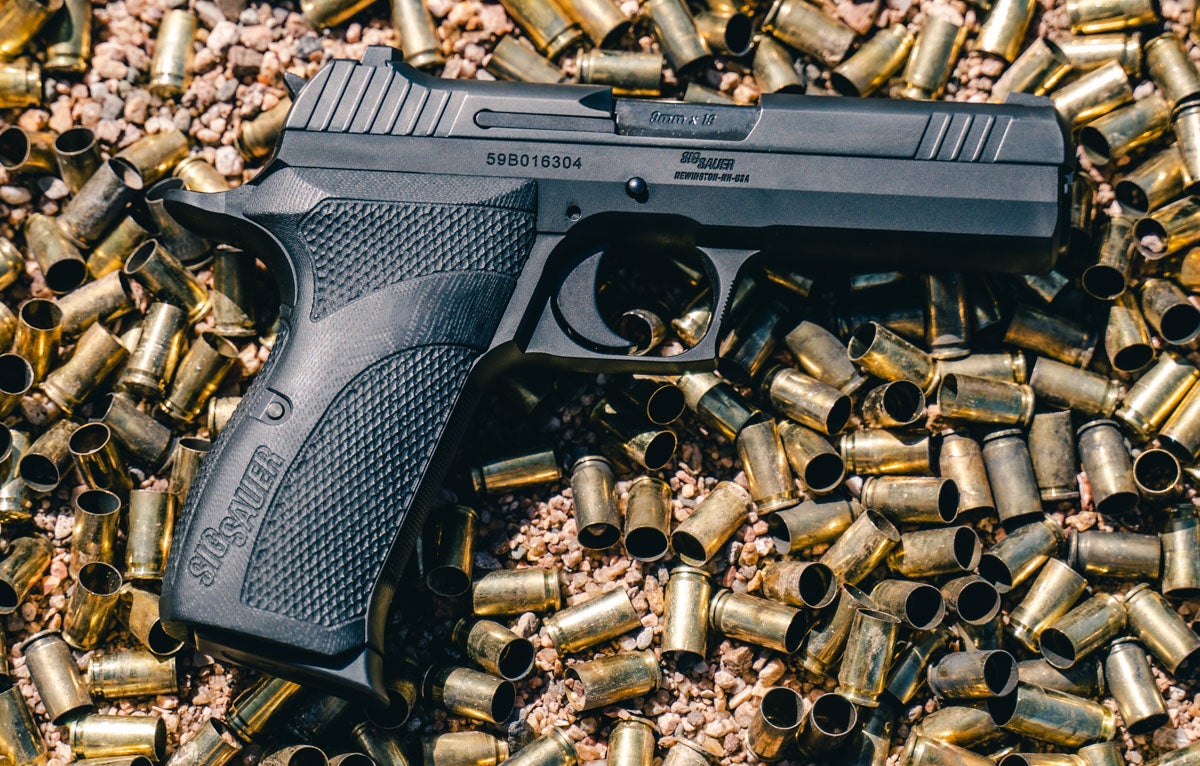 The Sig P210 Carry retains the elegant feel of the originals but is smaller and lighter for concealed carry use. Tanner Denton
SHARE

The SIG P210 Carry might be new, but the SIG P210 line has captured the heart of many military arms collectors over the years. Originally designed as a 9mm service pistol for the Swiss Army in the 1940s, the P210 was manufactured for six decades, earning a well-deserved reputation for quality and craftmanship akin to a fine Swiss watch.

While the Swiss aren’t known for a large military force, their arms are known to be high-quality for soldiers that know how to use them. Originally adopted in 1949, the SIG P49 (later renamed P210), featured a steel frame and slide that have full length contact, with a high-quality barrel and superb trigger. With match-grade ammunition, the specification for the original SIG P210 was a five-shot group measuring two-inches or less at 50 meters. Most pistols would struggle to offer this level of precision at half the distance.

In reviewing the design features, the original SIG P210 certainly sounds like a target pistol. The specifications include a single-action mechanism with a crisp trigger, single-side safety, a single-stack magazine with an eight-round capacity, heel mounted magazine release and full-steel construction. Compared to other notable 9mm service pistols, it is one that that rewards marksmanship skills over volume of fire. However, as time changes all things, the SIG P210 has seen a sunset on its career as a military sidearm, being replaced by higher-capacity, polymer framed, striker-fired wonder pistols. The original Swiss SIG P210 production line was shut down in 2005, turning them into collector’s items.

Seeing an opportunity with the SIG P210 second-hand market commending many thousands of dollars per copy, Sig Sauer introduced New Hampshire manufactured variants in 2016. To the untrained eye, a Swiss and US made example would look very similar, but the remake does have some subtle updates for manufacturing and customer user experience.

For the re-introduction, Sig Sauer made some changes that shooters of the pistol wished for, including a more refined safety that was relocated to the rear of the frame similar to a 1911. In addition, the heel release was changed to the more conventional and easier to access trigger guard (technically some of the original P210s had a standard thumb release, but these were not common). Finally, forward slide serrations, updated sights, an extended beavertail, checkered front strap, and an oversized and contoured slide release were included. Internally a few updates were made as well, resulting in the new variants being referred to as the P210A. These new models began as Target and Standard models, approximating the traditional SIG P210 models from the prior 60 years. For 2022, Sig Sauer released something a little more practical in the Sig P210 Carry model.

Sig Sauer offers a lot of options for their pistols, some practical and some for the fanboys. The P210 Carry is a well-thought-out, concealed carry option for fans of this famous military service/target pistol. Starting with the size, the frame remains the same dimensionally but is constructed of aluminum alloy instead of steel, cutting weight to 29 ounces. The barrel was shortened from five inches to 4.1 inches, and the slide chopped to match and be flush to the dustcover. From the front of the blunt nose to the rear of the frame, the pistol is 7.75 inches long with a height of 5.6 inches. These dimensions are very approximate to a Colt Lightweight Commander 1911.

Sadly, It Is Not Lefty Friendly

While purists might not like Sig’s updates to the P210 controls, I found them to be much more ergonomic for a right-handed shooter, with operation akin to a 1911. Like a 1911, I found the safety a little tricky to operate left-hand only, and the slide release had to be operated with the support hand thumb during slide-lock reloads. The safety is almost oversized but is scalloped to allow use as a nice thumb rest. It operates with a positive click to indicate on and off.

Because this pistol was designed around 9mm versus the .45 of a 1911, the grip size is shorter front to rear than the American iconic pistol. Fine machine checkering is located on the front strap of the frame, aiding in gripping the pistol. The black G10 grips are contoured and textured very nicely, fitting well into my hands and locking my grip to the gun during rapid-fire strings. There is clearance for the thumb to easily reach the magazine release, and the grips are cut to act as a bit of a magwell for faster insertion of a fresh magazine. The grips are a nice compliment to the durable Sig Nitron finish on the rest of the gun. In all, the SIG P210 Carry offers the look and feel of a refined pistol.

Some might be surprised to learn that a prototype of the original SIG P210 had a 16-round magazine, but the 8-round single stack design was what was adopted. The Sig Sauer P210 Carry has a pair of nice-looking magazines that feature a few updates from the original. They are not backwards compatible to the old guns due to the magazine release and a baseplate reminiscent of the old SIG P239. Should you desire a few extra rounds, there are several aftermarket options that extend the length and capacity.

At the range it was easy to see that this pistol is a shooter. The accuracy of the Sig Sauer P210 Carry was superb, with loads ranging from 115-grain remanufactured ammunition to a varied assortment of 115-grain and 124-grain Hornady XTP loads, Black Hills 115-grain FMJ, Federal 115-grain Syntec and FMJ target ammunition, U.S. Cartridge 115-grain HP, as well as Winchester 147-grain FMJ and Nosler 147-grain ASP subsonics. Part of the accuracy equation is the carbon-steel match grade barrel, as well as the clean break of the crisp trigger. While not quite as easy to use as target sights for wringing out accuracy, the SigLite night sights in 3-dot configuration worked very well on practical shooting type paper targets and steel.

During dynamic drills, the P210 Carry was easy to hold onto with the G10 grips and slim contour. The aluminum frame did have a little more recoil than a full-steel model, but it was very controllable for multi-shot strings on target. In the hand the pistol pointed well, naturally aiming on target versus fighting to get the sights on target like some other pistol designs. With multiple targets, I often found myself wishing for more ammunition in the magazine as it went fast while having fun.

Read Next: The Top 10 Best Handguns for Carrying (Plus Two Extras, Just in Case)

Shooting the pistol revealed why the SIG P210 is so beloved by its fan base. The inherent accuracy, great trigger and low recoil will quickly bring a smile to your face. Compared to other carry gun options available, there isn’t a slide cut for a red dot, it has a reduced capacity for its size, there isn’t an accessory rail, and it lacks the excessive slide cuts and finish options found on other pistols. However, the P210 Carry offers pistoleros enough features for those that put a premium on accuracy and a refined shooting experience. This is a connoisseurs carry gun, and to quote Obi-Wan Kenobi: “It is an elegant weapon for a more civilized age.”